Find the Perfect Floor Vase for Your Home Decor

Choose among many different styles of floor vases at low and discount prices. Find Asian antiques and Roseville pottery among them.

Yes a beautiful floor vase looks perfect when filled to the brim with an overflowing selection of tall and wafting flowers. Place it in a dining room corner to liven up the space. Set it on the fireplace hearth to soften the stonework and iron accessories. Accessorize your entrance foyer with a wide-mouth floor vase and let it hold umbrellas or walking sticks. There is a huge variety of floor vases available for you to choose from. You'll have an easy time finding one to match your home decor and family budget. Here's a variety of floor vase styles to get your shopping started - Roseville pottery, mid-Century Glass, and Chinese porcelain.

If you're into buying American and like to show off American craftsmanship, then you won't want to miss the opportunity to include a piece of Roseville pottery in your home decor. The Roseville floor vases shown to the right were made in Ohio between 1890 and 1954. Its factories were located in Roseville and Zanesville. The history of Roseville pottery is truly the history of US manufacturing as well. It began with simple and utilitarian pieces. But when it's President, George Young, noticed the popularity of more artistic pottery, he hired a series of artists to design his line. As a result Roseville did well during the Arts and Crafts Movement of 1920s. The vases produced during this time were really artisan crafted one-of-a-kind vases. So you really won't find many to buy in antique shops or even online at websites such as eBay. However, as manufacturing became more popular in the United States companies such as Roseville turned to it to produced less expensive pottery. However, the initial prototype was still designed by talented artists such as Frank Ferrell, which is one of the reasons that Roseville pottery is still a sought after collectible.

If you've just moved into a retro rambling ranch constructed some time in the 1950s or 1960s, then you really should consider one of the mid-Century glass floor vases shown to the right. They will fit your home like a glove. A floor vase is a bold home accessory. It can sometimes seem to heavy in a room. But when the vase is made of transparent glass, it takes on a lighter vibe. Perfect if you've done your ranch with mid-Century Danish Modern furniture.

Never forget to have fun with your home accessories. Last New Year's Eve I used several glass floor vases to create a fun entry way. I filled blew up a bunch of red balloons that then anchored their long strings in the floor vases with lots of pebbles. The strings were all different lengths and the vases were all different heights. It did sort of look like the balloons were abstract red flowers. It was very effective and very cheap. I don't mind spending money on home accessories, if they play an active role in our lifestyle. But my rule is that nothing is so expensive that I'm afraid to use it. That way I'm surrounded by beautiful things that are used as real items.

I love having a home filled with a variety of designs, but Asian antiques are my favorites. The unusual shapes and intricate patterns give any home a rich feel. More than that when I look at a piece of Chinese or Japanese pottery, it transports me to its homeland. If it's an antique, it also brings me back to another time. I believe that our things, home accessories or furniture should enrich our lives. The colors should calm or energize us; the fabric or material should feel good in our hands; and the stories of their origins should inspire us to create wonderful things as well.

I haunt antique stores and auction houses all over the northeast. The shop owners all know what kinds of things I love and they call when they get something in. But I've also taken to the world of online shopping. eBay is a great place. When I see something I love, I don't hesitate to email the seller and ask lots of questions if I have them. They are usually very accommodating and will even take additional photographs. I have to admit that I've made a lot of friends with the sellers there.

Buy an Asian Antique on eBay

A Touch of Oriental Flair

I have to admit that I love checking out YouTube for all sorts of things. But I'm truly prone to look for decorating and cooking advise there. You can check out this video to see how an expert creates an arrangement in a floor vase. It's very minimalist Asian. I have to admit that I'd probably start with her suggestion and then bling it out with lights and embellishments. I think some balloons would work as well. You can see how impressive the floor vase would be in almost any home design. I'd put smaller floor vases in front of it and create a larger display horizontally.

How to Decorate with a Floor Vase

Add a beautiful touch of Asian decor to your home with an Antique Japanese Sa...

A gorgeous selection of bronze Japanese vases to create an interesting and ex... 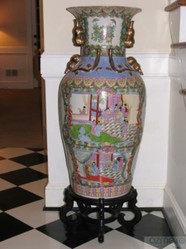 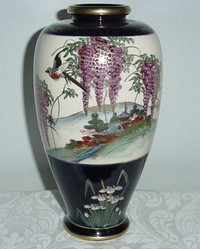 Add a beautiful touch of Asian decor to your home with an Antique Japanese Satsuma Vase. Some of the gorgeous designs include dragons, flowers and birds.
20%  2   2 Digby_Adams
Art and Home Accessories 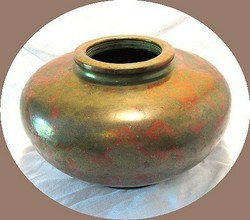