Roman kitchens were more sophisticated than many realize. They weren't merely fire-pits, but precursors to the modern kitchen.

By the first century Rome, during the period of empire, the roman world consisted of the lands we now call Spain, France, Britain, Greece, Turkey, Syria, Israel, parts of Jordan, Gaza, Egypt, and North Africa. The empire was so large that the Roman diet changed, significantly, due to conquest and the importation of new food.

How Roman Food During the Empire Period Affected the Kitchen

During the prior Republican era Romans had no knowledge of baked breads, yeast, or certain spices.

"Pepper," as we know it today, was actually allspice and/or nutmeg. It wasn't until the middle of the first century that Rome began importing black pepper from present day India.

Rather than a bowl of emmer wheat gruel Romans began eating bread. This was possible only due to flour (imported from Mesopotamia) and yeast (from Egypt).

Once these techniques and or spices were introduced the Roman diet changed, significantly.

Rome used a lot of different metals, particularly copper, bronze (an amalgam of copper and zinc) as well as lead.

Iron once reserved for weaponry, eventually made its way to the kitchen. They also made extensive use of fired clay in the form of pottery for product shipment and basic cook pots. Thrown bowls and pots were also used for mixing and cooking. Roman red-slip ware imported from north Africa was very popular by the middle of the first century.

Wood was the most common fuel source with coal coming in a distant second depending on availability. Few mines existed underground. Most mineral and metal extraction took place at the surface where these things could be easily dug up. It was not cost effective to export coal from regions that had it, so coal use was limited to locales that had it on-hand.

Cooking was accomplished on an open pit fire raised above ground level or in a wood fired oven. Cooking at ground level was not popular.

Even though this sounds primitive it was no less effective than cooking in a bar-b-que pit over hot coals. In fact the similarities are striking. Also, because the fire was raised cooking was less fatiguing than kneeling over an open pit.

Knives
Once Romans figured out how to work iron it became a very popular metal for knives, spoons, the grate over the fire, and lifters. Wood continued to be used for spoons, ladles, and eating bowls, so it's use in the kitchen was limited. Iron was expensive and most was reserved for use outside the kitchen. That said the most essential of kitchen tools, the knife, was typically made of iron.

Cookware
Cookware was typically terracotta and later red-slipware imported from north Africa. Flat pans, such as our modern day skillet, were typically made of copper or bronze. But copper and bronze were not the best metal to use for some dishes, particularly those that required wine or grape juice (must) reductions. Copper, when used for this type of cooking, would discolor and impart an odd taste to the food items. For cooking acidic foods the Romans used lead pans.

Utensils
Hand tools were many and varied with spoons, ladles, spatula (a Latin word), trivets, forks, hooks and of course knives.

Storage
If a kitchen was large enough it might accommodate amphorae. If this was the case a pit with sand it in served as the perfect base to push the bottom of the amphorae into. Shelves were also common along with hooks for hanging pots and other utensils.

The Roman Range
Heat sources consisted of coal (infrequently) and wood. A raised hearth was a common item in the roman home with a fire pit at one end and a work surface on the other. Over the fire pit a sized grate or brazier would be placed over the coals for cooking. An arch in the base of the hearth was used for storage, typically fuel.

Despite how rudimentary this all sounds many of the techniques and methods used are quite familiar to most who read this. In fact I believe that anyone who has cooked in a modern kitchen could probably prepare a good meal, with just a little coaching, in an ancient Roman kitchen.

The Roman Oven
With the introduction of domestic wheat, which replaced the wild emmer wheat, and yeast, ovens began appearing in Roman kitchens, though there were still fewer ovens than open pit cook-tops.

Roman bakeries were so efficient that cheap bread was widely available; in fact the sitting emperor typically subsidized bread production. Most Romans simply did not see the need to build an oven in the home. Still, a few have been found in the city of Pompeii and elsewhere. The picture at right is a portable oven. The top held the fire and the opening in the side was access to the interior of the oven.

Like the grill above, the oven itself was on a raised platform, with space under the platform used for storage, likely fuel. The raised surface made putting food items into the oven much easier.

Black Oven
Most Roman ovens were what we now call "black ovens" because the fire and the item to be cooked shared the cooking chamber. The item to be cooked, usually bread, was placed in the oven either while the fire was still burning or after the cooking chamber had been heated and the fire swept out. If this last technique was used the uncooked bread was placed in the oven after the fire was swept out and the door sealed to keep the heat in.

Yeast Breads Cause the Birth of Ovens

Pompeii and Tuscan Ovens
Though "Pompeii oven" is really a misnomer the name has stuck because so many fine examples of brick oven have been found as the city of Pompeii was excavated. The design, though basic, is quite functional.

You can even find free plans for a "Pompeii oven" online. Some upscale pizza houses use these ovens today. Here are a few of the links.

Though most of this is rudimentary to the modern reader one should bear in mind that gas and electric cooking are modern concepts. Gas was introduced widely in the late 1800s and electricity is even more recent. Only two hundred years ago the cooking methods the Romans used were still the best way to cook.

The techniques and tools the first century Romans used for cooking remained long after the empire crumbled into a faded memory. In fact some of the techniques have not changed at all since their introduction in Rome.

Ideas that have survived down the ages include "french" bread, pudding, custard, flat bread with toppings (pizza) and the near ubiquitous use of spices. Romans even had their own version of the hamburger.

The author was not compensated monetarily, with discounts, or freebies by any of the companies mentioned.

The author makes a small profit from advertising attached to this article. The author has no control over the advertisers or the contents of those ads.

What a cool look back in time and the kitchen. I want a wine storage like that in my kitchen... Seriously I had a few Ah Ha moments. Great read! :)K

Wow. Thank you very much Liam!

Well, the wheat the Romans were familiar with were emmer and einkorn. Emmer orginated, wild, in the fertile crescent (or present day Iran) and Einkorn originated in Turkey. Both these were lands Romans had conquered or traded with before the first century. Neither Emmer nor Einkorn have as much gluten as Triticeae so those types of wheat did not work well as breads.

Triticeae, or bread wheat, came from Egypt along with the Egyptian knowledge of bread making and the use of yeast. So it's a bit of a fine point, but Romans knew of wheat, just not the variety used for bread-making. At least not until the first century C.E.

This was informative and fun, with all this info about foods, bread, spices, and ovens. The most amazing thing to me is that they didn't grow wheat and didn't know about yeast.

Italian Bread With Plum Tomatoes: The Joy of Bruschetta

Italian bread can be eaten in bite-sized chunks or politely cut slices. Eithe...

Fennel is a flavorful herb. It is particularly nutritious and healthy in sala... 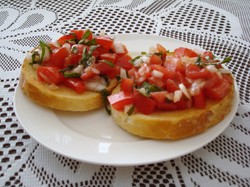 Italian Bread With Plum Tomatoes: The Joy of Bruschetta

Italian bread can be eaten in bite-sized chunks or politely cut slices. Either way, it also can be slathered with butter or topping. Featured is a recipe for plum tomato topping.
95%  8   25 DerdriuMarriner
Italian Food 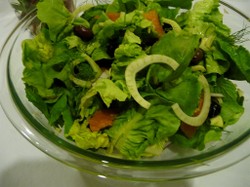 Fennel is a flavorful herb. It is particularly nutritious and healthy in salads. Featured is a fennel salad with red leaf lettuce, black and green olives, and cherry tomatoes.
Loading ...
Error!