Hollywood history is littered with "forgotten" films. Here is an adaptation of the difficult-to-film children's classic that is seldom seen today.

Not all films that are lost deserve to be, or were even meant to be. Sometimes it appears artifacts of entertainment from past ages are just the results of "luck of the draw." A "classic" is often just something that has been kicked around a lot through time and survived, for whatever reason.

In 1972 British television producer and director William Sterling ("The Prisoner") helmed another in a long line of adaptations of Lewis Carroll's wildly imaginative, difficult to visualize "Alice In Wonderland" books. It appears the film, which is actually a fairly faithful adaptation and quite entertaining, was mildly successful, at least in Europe. It even won some awards, and deserved to. However, the film is not so much lost as the victim of neglect; the only way to see it, at least in the U.S., is in one of the incredibly shabby transfers available readily on DVD at some Target/Costco/Best Buy stores. A well-mastered print is long over-due but seems unlikely. The question is...why?

Filmmakers have been trying to capture "Alice" and her dreamland adventures on film since film was invented.  Outside of the "OZ" stories I can't think of any other children's book that has gotten such enduring treatment--filmmakers are obsessed with capturing the images of Carroll's dream-inspired tales.  Walt Disney began his career filming "Alice Comedies," shorts from the mid-1920's that featured a plucky young girl facing a menagerie of cartoon-world creatures.  Of course, Disney would tackle the material again in the 50s and create one of his most beautifully realized, and least successful, films.

It almost seemed the subject matter was cursed for awhile; in 1933 Paramount Studios created a star-studded, expensive extravaganza version of the beloved Victorian-era classic that was a huge disappointment for the studio; much of the credit for the failure of the film is targeted at the fact that all the celebrities were hidden under thick character make-up but anyone who has seen the film is likely to agree it's a challenging work...too dark for little kids, too tedious for adults.

There have been various cartoon/stop-motion versions of Alice, several TV versions and even an X-rated musical.  Some of these projects have been successful but very few of them adhere to the spirit of Carroll's original work.

In general, the problems seem two-fold: "Alice" is a story without a plot, without a villain and the protagonist is passive; she simply goes from place to place encountering things.  There's no goal, no real motivation (in the book she's not even all that concerned about getting home) and certainly nothing to be learned, which makes it a screenwriter's worst nightmare.

The second problem is that, since the story takes place in "Dreamland," it's difficult to put images together that are satisfying for all movie-goers, particularly those fans of the free-flowing, mostly suggestive book.  If a production designer adheres too closely to the brilliant, but grotesque, caricature-drawings political cartoonist John Tenniel created for the books the results can be horrific; any changes to that design and purists feel cheated.

It's a testament to the difficulty in translating the books that the biggest box-office success in "adapting" Alice so far has been Tim Burton's computer-fx-overkill film from 2010 in which the director admitted he hadn't even read the books but was merely taking the characters and inventing something around them. I have a queasy feeling that the popularity of the film is due mostly to the fact that none of the audience knew or cared a jot about the original books either.

There has yet to be a fulfilling, purist adaptation of "Alice" that has had any success, and it might not even be possible to accomplish this feat...and yet...

One of the more intrinsic elements of "Alice" is that it is based in British culture.  To most viewers, and, unfortunately, most writers who adapt the work, the approach is that the story, such that it is, is just a river of nonsense flowing nowhere in particular.

The truth is, most of the details of Alice are less nonsense and more parody/satire.  A casual glance through the annotated version of the book proves this; the "nonsense" poems (like "How Doth The Little Crocodile") are used as sly "digs" that the Liddell children, to whom the stories were first related, would have been aware of. Characters and situations were based in real things that Lewis Carroll, who was a don at Christ Church in Oxford, saw and related to every day and he was poking gentle fun at these things while making up a story to tell his young companions during outings.

In order to do the "Alice" experience justice you have to know that or it's all just...gobbledygook, and certainly not compelling cinema (unless, as most people--wrongly--assume, the author and audience for the work need to be on peyote or some other mind-altering chemical to enjoy/understand it).

"Alice" needs to be done by people who have a deep understanding and reverence for British history and humor, and each attempt to adapt the work that comes along and fails in one way or another further points this out, to me at any rate.

Sterling's film version of Alice's adventures takes liberties, as any adaptation of a book into a movie must; the actress who plays Alice is too old and seems a bit awkward in situations designed for a much younger child.  The animal costumes are a good effort but until computer animation came along there was just no easy way to represent talking animals...either you had to use expensive puppets or full-size actors in make-up, either way it wasn't very effective. Further, the story suffers the same problems  that every adaptation faces, as mentioned above; it's just really hard to capture Alice's "world" on film without introducing a plot arc, motivation or logic into the precedings, and the lack of such things makes a movie hard to stay involved in.

That being said, I believe the movie is one of the most authentic and effective adaptations made of the books, maybe THE most effective.  If it weren't a musical it would be better still, but despite some criticisms I've heard, I find John Barry's ("Somewhere In Time") score heartbreakingly beautiful.  Yes, a little monotone at times but beautiful nonetheless.

The tone feels just about right...each of the characters is caught up in his or her own business which makes perfect sense to the CREATURE; that is, they aren't acting like they're insane, they're just acting in a way that makes us think they're insane because we don't know what they're thinking.  But THEY believe they're "sane," they aren't just acting crazy.  In effect the characters are, like in the book, parodies of real people...the mouthy, uncompromising seller of hats, the fussy, officious rabbit who always fears he's late, the imperious, by-the-books queen.

The exceptional cast that was assembled for the film helps things considerably.  Aside from well-known-in-the-States actors like Peter Sellers (creepily great as the March Hare) and Dudley Moore (as the Dormouse) the film stars Ralph Richardson as a professor-like Caterpillar, Robert Helpmann (the evil toy catcher in "Chitty Chitty Bang Bang!") as an effete, snooty Mad Hatter and Flora Robson as a grand, uncompromising Queen of Hearts.

The sets are lush, the costumes are gorgeous and the music full of longing and wistful fantasy. The special effects are wonderful and the set-pieces of some of the famous scenes from both Carroll's books are effective and full of atmosphere without becoming off-putting or too scary for kids (well, maybe a LITTLE scary in parts, but that's not always a bad thing).  The episodic nature of the film is very much like the book as adventures weave in and out with little cause and effect but again, that is how an authentic adaptation SHOULD be.

The movie ends up being a very authentic, smart and very BRITISH bit of entertainment that, if not an effective piece for children, specifically modern children with short attention spans, is a successful adaptation for a lover of the original books the project is based on.

Again, this "Alice" isn't exactly lost--it can be had for the price of a candy bar practically anywhere, in fact (Amazon has several different versions for cheap) and it's possible a great many people have purchased it not knowing what it was, watched the slow and poorly transferred opening scenes and politely turned it off to check in with the much more vividly rendered Burton version.

It's too bad, because I sincerely feel the film deserves better treatment.  It may be too slow and ponderous for children, as I said...it may not please fans of the book who need a "grittier" rendition (I admit it ventures into treacle territory often which is not in the spirit of the books, at least until the "Golden Afternoon" summation at the end). It may, in fact, not even be all that great a movie...but as far as I'm concerned it's the best adaptation of Lewis Carroll's original works and a very *entertaining* film, with a wonderful cast.

I understand there's a wide-screen, cleaned-up version available overseas but it's not likely to find its way over to the U.S. in any form but bootlegs.

Meanwhile, I understand, as of this writing Tim Burton is preparing an "Alice In Wonderland 2."  While looking through bins of movies at the last remaining used video rental store in town I found Burton's film and a ratty copy of Sterling's 1972 effort and examined them both closely with intent to rent one of them.  Boy, Sterling's film sure holds up well, even in a terrible transfer...!

With "Phantom Of The Opera's" Michael Crawford as the White Rabbit 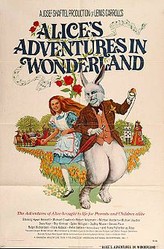 What are the top animated children's movies for 2011? There are some great kid's movies premiering this year from some of the top studios including Disney Pixar, and Dreamworks.
50%  5   5 lauryallan
Kids Movies