Not so much a forgotten film as a neglected one, my examination of Chuck Jones's delightful adaptation of the classic Norton Juster book.

Once upon a time Disney Studios had the children's animated film market locked up--even after Walt Disney passed away the studio managed some 1970s films that were either big hits (Jungle Book) or beloved by fan groups (The Aristocats, The Rescuers). Now and then animated films would crop up from different studios trying to cash in on the Disney magic but most of these were unsuccessful financially or critically (Does anyone remember "Journey Back To Oz" anymore?).
One such film got hardly any release at all and, despite being based on a beloved book and getting periodic holiday play on TV, still has never completely caught on.
In this article I explore Chuck Jones' animated adaptation of Norton Juster's wonderful book "The Phantom Tollbooth" and will try to make a case for whether it deserves it's rank as a "forgotten" movie of the 70s.

In my career as an artist working in animated films I have often been approached by people who claim to have brilliant ideas for the "next big animated film." Chief among these ideas, for some reason, has been the comment, "Someone really ought to make an animated film out of 'The Phantom Tollbooth!' It would be such a great movie!"  My response is always the same:  "Someone did, and yes, it is."

Norton Juster was a Brooklyn architect who got a grant to write a book in line with his field of work (back when such things happened!).  Instead of the book he promised he offered up a dense, incredibly sharp but also very readable story about a bored boy named Milo who goes on an adventure though a sort of "Education-land" and comes out the other side inspired and evolved by the things he's learned about life.  Chief among his lessons he finds the value of a working knowledge of reading and mathematics, but as things that are entertaining, enlightening and fun instead of being intimidating or stodgy.

Coupled with fun illustrations in the unmistakable "sloppy" style of Norton's then-neighbor Jules Pfeiffer, the book is a wonderful package for readers of all ages.  For children it works as a nonsense, episodic fantasy tale in the vein of "Alice In Wonderland," for adults it's a clever, twisting patchwork of educational truths, puns and cerebral, puzzle-like games (A "Whether" man is concerned with "wheather" there will be weather more than the weather itself).  "Tollbooth" is that rarest of things, an entertaining piece of sustained writing that is never stodgy or forced, that is always engaging. To quote Bill Cosby from the old "Fat Albert Show, "...and if you're not real careful, you just might LEARN something."

The book, which won several awards upon its release in 1961 is timeless and popular to this day, and considered a teacher's favorite.  It was inevitable that someone, someday, would try to film the material and reap some of the success of the name recognition of the project as well as attempt to illustrate visually some of the creative ideas that fill every page of the story.

Producers at MGM smartly chose animation as a medium to portray the magic world of "The Phantom Tollbooth."  The studio had a history of dabbling in caroon films with the classic Tom and Jerry characters, and even had these characters dancing with actors in some of the MGM classic musicals.

Further, the producers were wise to choose animation legend Chuck Jones, late of Warner Brothers (Bugs Bunny and pals) but beginning to spread his wings on his own, to direct the gorgeously designed and colored animation.  With a handful of pleasant musical numbers, a roster of legendary voice talent (Bugs Bunny's Mel Blanc and June Foray, Daws Butler, Hans Conried and Les Tremayne) and "every kid" Butch Patrick (Eddie Munster) in the role of Milo the film seemed destined to be at least a decent hit.

However, at the time MGM was going through financial troubles and would eventually shut their animation division shortly after the film was made.  The project was shelved while the studio tried to repair things internally and then "Tollbooth" was only given a limited release, in 1970, two years after it had been made.

All the same, there was hope that a quality film, based on a popular kid's book, couldn't really go wrong.  So what happened?

It's not easy to find information concerning what happened with "The Phantom Tollbooth" film.  It seems likely that by and large it just wasn't released widely enough or advertised strongly enough to be seen as an "inevitability" the way films are marketed nowadays.

Another problem might have been the subject matter.  The book of "Tollbooth" is already a bit of a challenge in many ways...if you don’t "get" the parallel between Milo's fantasy world and his journey to become a better "student of life" it really might seem like the story/film is just random nonsense without a strong through-line.  Kids might find it over their heads; adults might find it too childish.

The adaptation of the film is a bit of a dichotomy; Norton Juster has gone on record as saying he didn't like it (OK, he actually says he hated it but I'm trying to be fair).  The "Tollbooth" book is very dry and clever and leans towards the dark, sardonic and surreal at times ("The .58," a boy Milo meets in his journeys, is only .58 of a person because he's from an "average" family, which has 2.58 children).

Mr. Jones replaces a lot of the story with gentle songs and his cute-almost-unto-cloying character and animation designs, which are entirely unlike Pfeiffer's original, wispy illustrations.  Where Milo is depicted as being slightly pale and emaciated in the book he's given a full head of floppy, dark hair and long eyelashes in the book; where "Tock the Watchdog" is a scowling canine with a stopwatch embedded in his chest in the book, Jones replaces him with one of his trademark adorable doe-eyed dog designs (see his famous, award-winning short, "Feed The Kitty" for the end-all be-all in adorable dog and cat characters).

Lastly, the plot itself is less concerned with the journey to restore "Rhyme and Reason" to the chaotic "Lands Beyond" than it is with character interaction, and occasionally the story gets lost in broad slapstick or dizzying displays of language and math.  However, it remains a film much beloved by those who have seen it, particularly when they were young, and was well received by critics.

4) The Kingdom Of Wisdom is restored

I first encountered "Phantom Tollbooth" as a movie poster, as a child, and instantly fell in love with it.  The poster looked a bit like a similarly forgotten, or at least misplaced, kid's film I'd also adored, the feature length "Pufnstuf" movie from around the same time.  Fascinated by ANYTHING with animation in it I begged my parents to take me to "Tollbooth" until I was hoarse (and, I think, tears might have been involved at one point) and managed to see it at least two times in a theater, several times on TV during Thanksgiving holidays and perhaps a hundred times on home video (there were VHS and laser disc releases in the 90s).  The movie was released in a "made on demand" DVD version that appeared on the Time Warner website a few years previous to this writing (Warner appears to have collected a good deal of the MGM backlog).  The print is crisp and clear and easily found on You tube these days, for free, and the movie has played on Disney (and related) channels many times over the years.

The project has been turned into a successful musical, has run as a staple of children's theater for many years, has been adapted into operetta in various forms and 2010 started rumors of a remake on the way.

So is it still a "forgotten" film?

I still know many people (who should know better) who don't know the film even exists.  I don't know many people who have noted the brilliant opening moments when the (live action) tollbooth first appears and Butch Patrick explores the curiosity of having been turned into a cartoon character, a sequence that is still delightful and beguiling today.  No one talks about the stunning, surreal, neon-garish color scheme or the adorable character animation and lively voice work.  It's a film that was clearly never destined for greatness but is much loved by the small group of fans that remember it.

There is a documentary coming summer 2013 on the subject of the enduring book that may include information about the film, one can only wait and see; one thing I'm sure fans of the original sincere and well-intentioned film are hoping we do NOT get is an updated remake that includes a lot of flash-editing, obnoxious mugging, pre-programmed pop-songs and "animation script 101" smart-mouthing...if the original film can't be revered perhaps it's best to leave the property alone; after all, the point was to get kids to learn...what better way could there be to do that than to have kids read the original book! 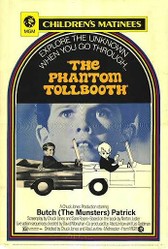