Wizard of Oz fans will be tripping over their ruby red slippers to get some of these fantastic Wizard of Oz mugs!

On August 18, 1939, the New York Times higly praised The Wizard of Oz calling it a movie that left 'youngsters' eyes shining' and that lent a 'quietly amused gleam' to the eyes of the older folk. They called The Wizard of Oz the best film since Snow White.

Starring Judy Judy Garland, Ray Bolger, Jack Haley, Bert Lahr and Frank Morgan, this MGM film is a musical that was based on the 1900 L. Frank Baum book The Wonderful Wizard of Oz.

The Wizard of Oz won two Academy Awards for Best Song and Best Original Movie Score but lost Best Picture of the Year to the also enduring movie Gone With the Wind. I am sure that no one anticipated the tremendous staying power that this film would have. The Library of Congress would eventually call it the most-watched motion picture in history.

Fans and collectors of The Wizard of Oz are fortunate in having a wide range of top-quality merchandise with which to celebrate this iconic film. Whether you are familiar with The Wizard of Oz from the movie theatre, from watching it every year once a year when it was aired on television as I did or you are a more recent enthusiast, you will enjoy this selection of the most WICKED Wizard of Oz coffee mugs available on-line.

By Lorrie Veasey and Our Name is Mud.

What a WICKED mug, LOL!  This green and purple one is by Our Name is Mud and features the positively WICKED WITCH OF THE WEST.  This is quite probably Amazon's most popular The Wizard of Oz mug gaining extra popularity, I expect, from the Broadway musical 'Wicked.'

The front features the wicked witch on her broomstick and the back warns you not to make her call the flying monkeys.

Can A Coffee Mug Be TOO Nice To Use?

When I saw that first mug I could not help but wonder, can a coffee mug be too nice to use?  I was definitely thinking, "Yes."  Since than I saw a great solution to this problem and that is one collector who buys TWO of the coffee mugs that he loves -- one for display and 'collecting' -- one for every day use and enjoyment.

Can a coffee cup be too nice to use? What do you think?

This Vandor "Ding Dong The Wicked Witch is Dead" coffee mug features one of the most popular lines from a a couple of songs in The Wizard of Oz. The song was sang by Glinda, The Munchkins and Dorothy Gale. It was written and composed by E.Y. Harburg and Harold Arlen. The mug is a very attractive cermaic one, holds 14-ounces of your favorite hot beverage and should be hand washed, if you actually plan on using it.

This Vandor coffee mug features The four main Wizard of Oz characters -- Dorothy Gale, The Tinman, The Scarecrow and the Cowardly Lion. It is a 12-ounce ceramic mug and is also dishwasher and micrwave safe.

This unsual coffee mug features Dorothy's ruby red slippers in 3D. Note that it is not dishwasher or microwaveable.

Three More Of The Best Wizard of Oz Mugs

Including the ruby slippers, another wicked witch and a vintage poster style cup.

Three more Wizard of Oz mugs for you.  I'm not sure whether I prefer the clever mug that reads "I'm a witch, what's your excuse?" or the Vandor mug that features a vintage-style movie poster or the pink Vandor mug featuring the iconic ruby red slippers but it really doesn't matter. They are all great mugs, I don't think you can pick the wrong one.

'Witch' Wizard of Oz Movie Mug Is YOUR Favorite?

The Wizard of Oz Movie Review

In case The Wizard of Oz isn't the right coffee cup theme for you.

The Best New Our Name Is Mud Coffee Mugs
Whether or not your name is mud, you are going to love these attractive and often times humorous coffee mugs by Lorrie Veasey and Our Name is Mud.

Funny, Back-to-Nature Coffee Mugs By Hatley
Do you love Hatley's merchandise? How about coffee? Are you looking for a funny, back-to-nature themed coffee mug? Check out these clever mugs by Hatley.

Which of these Wizard of Oz coffee mugs was your favorite?

I found the mug on eBay. You can find it by following this link to eBay: http://bit.ly/good-bad-witch-mug

I love the "GOOD WITCH/BAD WITCH" mug. Had received it as a Christmas gift but it got broken. Am desperately trying to replace it.

I love the Ding Dong Wizard of Oz mug. I just started rewatching this movie with my niece. She loves the wicked witch. She likes to pretend to throw water on me so that I will melt. She gets to be Dorthy and I'm the wicked witch.

These Wizard of Oz mugs are great.

It's pretty amazing how popular the Wizard of Oz still is after all these years. I just can't pick a favorite!

Definitely thinking of getting that Wicked mug for my daughter, who adores the Wicked musical!

I'm with you it is hard to pick one. I love the first one (Ding Dong) and the Wicked one and the "I'm a witch" one...

It's hard to choose just one, but I do especially like the Ding Dong the Witch Is Dead mug. Wizard of Oz is one of my favorite movies, so I really do love all of these.

Love the Wizard of Oz and these coffee mugs! It is difficult to pick just one.

A feel good movie with a great soundtrack. It's a funny rock and roll tale a... 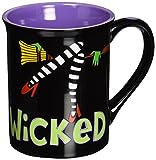 A feel good movie with a great soundtrack. It's a funny rock and roll tale and the kids are priceless.
Loading ...
Error!