If you only have time to visit one place in Northern Italy make sure it is this place- an old Austrian fort nestled high above the town on an Italian hill top !

Forte Colle Delle Benne was one of the network of border fortifications between Austria and Italy before WW1. Austria lost this land to Italy following its defeat in WW1, giving a bizarre situation whereby we have a German speaking tradition in North Italy near the Austrian border.

During the last week, I climbed up to this remarkable hill fort which stands above the charming village of Levico Terme next to a beautiful lake.

It was a difficult climb and at times I thought I wouldn't manage it in this drought and heatwave that Southern Europe is experiencing. I was glad that I persevered with the climb. It was worth every step. Come and climb with me.

All photos are my own.

The town of Levico Terme

The town is set in a valley against a dramatic back drop of beautiful mountain side. It is in Northern Italy, the very North, in fact close to Austria.

After WW1 ended,  regardless of the wishes of the people, the treaty directed that this part of Austria would be given to Italy, irrespective of the views, needs and wishes of the inhabitants who were in fact Austrian and found themselves forced to be Italian. They have managed more or less to keep their identity although the cultures have merged together over the last 100 years and I found myself eating for example, pizza or pasta with Austrian Speck - spiced ham - on it. They have their own dialect too.

Forte Colle Delle Benne has recently been restored and the restoration has been superbly done. Nothing is too much trouble for the staff members we met that day. They are kind, helpful and good at explaining.

The fort was built between 1880 and 1889 as a defensive position against invasion by Italy and now finds itself actually IN Italy. By WW1 ( 1914 - 1918 ) though it was considered out of date so wasn't a major defensive position at the time. Italy entered WW1 in 1915 and it is referred to as La Guerra Grande.

In that heatwave, the steep walk up was a considerable challenge although it is accessible by road too. The path was very good and well laid out but steep at the side down the mountain.

I was interested to see how vines would grow on a mountain top.

I was on the point of giving up and turning back, so my husband suggested patiently that we sit a while and have water. I didn't want him to miss out visiting the fort and so we sat and then walked on, turned a sharp corner. There it was - just a few yards onwards. I had nearly turned back just a few yards away after that climb!  How glad I was to have rested and continued.

The gate was enough to spark my enthusiasm. I set to wondering who had walked  through that gate over 100 years ago.

The Forte is staffed by extremely knowledgeable, hardworking staff who kindly made me a cup of tea. It was much appreciated.

Here's an idea  of what it is like inside and how it would have been for the soldiers garrisoned there. Amazing place, amazing restoration.

The stone wall must have been rather cold inside. The windows were small and defensive from attack.

The officers had a better toilet and not just a hole in the floor.  :)

The officers had a better bedroom too. No change there!

Look at the view from the top. What a great look out post against invading Italians. Oh - except it's now Italy....not Austria !

This is a restored window from one of the canon positions which needed to be large of course.

The whole place is stone made and like a maze finding the way round. But there are several maps to help along the way and it all leads back to the entrance.

Whether you go up by car or walk, this is a must-visit if you are in the area. The wonderful staff enhance this remarkable place.

I go on feelings quite often and I could feel and sense the occupation of this fascinating place which could house up to 200 soldiers at a time.

A truly remarkable restoration of a truly wonderful place.

A close up of vines

Ah apologies.
In the village where we stayed, every day to this day the air raid siren sounds at 12 noon. This was always a test siren for if the Italians invaded and even though Italy now owns the land it still sounds, although more today as a relic of gone days by. This suggests that relations were not always as peaceful as may be thought between Italy and Austria . Of course Italy only became a country , a unified country in 1871 , nine years before the fort commenced to be belt. Maybe there is a connection here ! A large new state to the south and a fort being built ?

I am aware there was a peaceful coexistence between the Romans and the Austrians, which benefited both. The Austrians made weapons f high quality that they sold to the romans. The romans had forts at the border, but it was an open border for many years. As wooden castles have been replaced a the same site with stone castles, could the Roman fort have been replaced with this one? My question of age was to determine if this was an old Roman fort, which obviously it is not, but perhaps it is a replacement.

BSG Great questions
Italy did not enter the war initially in 1914 and in negotiations was promised the land if they joined the British side and they won. The victory promises to Italy were largely unfulfilled and this resulted in them joining Germany and Austria in World War 2. Italy had wanted those lands. previously. Austria lost World War 1 so had to pay reparations part of which was losing land.

The wishes of the residents were ignored.

A nice picture presentation. I am curious as to how old the buildings are, and why would Austria lose land after WWI? Was the border in dispute earlier? I realize when a country loses a war land may be taken, but there is usually a reason. I do not see Italy as out to grab land in such a small tract.

My husband has Italian blood thru his grandmother and her family came from Northern Italy .

Italy is my favourite country, the people, the food, the history, the scenery, the culture , the language ...everything.

When you speak of wanting to live there, Derdriu, I understand,as it is a lovely place. Europe has so many really great places in it. That is why I am so impatient with the small-minded British nationalists who are so anti-European. I love Europe. I find Italy delightful and I relish Italian food, wine and culture. Yet neither Veronica nor I have any Italian blood.

I don't know anyone in that area of Italy. Anyone who lived there would have been an Austrian soldier so I assume would have returned to their own land after WW1. in 1918.

It was worth the climb and I am delighted to have continued to the top. The scenery is just breath-taking.
TY for posting

Veronica, Do you or your husband know descendants of people connected with the fort? The big and canon windows, the grapes, the stairway and the view make me want to live there even though the facilities, quarters and slit windows don't!

Lovely pictures on the frame I think

Grapes are not usually allowed to grow too low and near the ground, as there can be slight ground frosts in Spring that could damage the grapes.

With a good yield of produce available in my own garden, friends' gardens and... 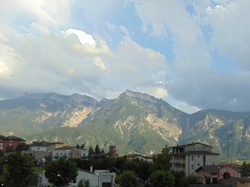 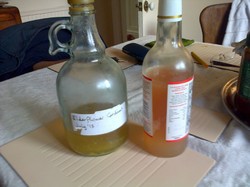 With a good yield of produce available in my own garden, friends' gardens and also to forage amongst the hedgerows, August always sees me preserving before winter.
100%  128   17 Veronica
Regional Foods