Gardening in the Pandemic

Despite all the deaths of people the garden goes on as a sign of hope and better days to come.

In the United Kingdom we are still under lock down and with the prime minister still in hospital his stand-in is afraid to make any changes, but the regulations allow us to visit our allotments and I have been attending and caring for the crops that I have been able to plant. A garden is a positive and beautiful thing that is a sign of life, the co-operation between humans and nature. At such a bad time it is a font of blessedness.

Picture courtesy of gris379, of Pixabay

A Garden in Time

This small allotment site began its present  life as a patch of spare land unwanted for building, possibly because a stream, now culverted but still prone to overflowing, ran along one side of it.The year was 1916 , when thousands of men were dying in the trenches across Europe as power-hungry rulers contended for greatness at the expense of their people's lives. At a time when U boats were trying to starve Britain into submission there was a need for home grown food.The site was established and divided into plots twenty five yards by ten divided into two by a central road.

I cannot help but wonder who had my plot before me. I took over from a man named Stevenson, who had grown tired of gardening, but of my other predecessors I know little or nothing. I am pretty certain that the first tenant was a woman, most of the plot holders were female at a time when men were away.I know not her name or whether she was a war widow toiling to combine doing a job, bringing up children and growing some extra food, probably potatoes, leeks and onions, to feed hungry and possibly fatherless children. Who knows, there are no records.

The Second World War saw the land tilled as never before, but again by one unknown to me. All I can say is that the plot I have had no trees, for I  have added them over time. Nor were there usable greenhouses, which I have set on the plot.There was no  pond and consequently no frogs

I speak of my predecessor's ordeals as a way of setting the present situation into context. We have had a few weeks of pandemic, whereas my precursors had years of war. Situations have changed much over the decades. I am the fortunate one compared to these folk.

But there are constants that run through time. The robin still comes seeking grubs. It is not the same robin as my predecessor saw in 1916, though I am convinced that she saw one, but the robin is England's national bird, an aggressive little creature who fights for its territory.  How typically English! I see her as a sign of hope.

The wood pigeons cuckercoo from the trees lining the nearby road, and the grey squirrels gambol on the plots, scampering for safety when they see me. Whether there was a fox in 1916 I know not, but there is still one now,for she has left her paw prints on my black geotextile mulch and occasionally rooted in one of my raised beds.The bumble bees still come annually. All of these are signs of the ongoing vivacity of nature,testifying to the essential goodness of creation.

We do not own the land. We take what is handed down to us so that we can hand it on to the future, passing on the baton,as it were.Hopefully, when the time comes to pass it on it will be in better condition than it was when we received it.

Problems of the Pandemic

We  could have had a worse government at this crisis time, but on the whole it has not been unduly severe. But for gardeners there has been some inconsistency. The government allowed allotments to stay open, yet closed garden centres where you could obtain seed and seedlings. Worse, where can you purchase bulk supplies of quality compost? True, the supermarkets were able to take up some of the slack, but gardeners are feeling the strain of not being able to obtain supplies. Mail order compost can solve the problem to some extent, but I am down to my last three fifty litre bags of my favourite multipurpose compost, and I need more. I believe that a local nursery is taking mail orders, so I will have to look that up over the weekend, not today, it is Good Friday and most shops would be shut anyway.

I have some stocks of home made compost, but not enough. I had been planning to use that for the trees and bushes in the rear section of the plot. But the problem is that when I decided to relay my garden to cope with my ongoing health problems I went over to containers and raised beds, which needed importation of much compost. I intended to slowly fill the raised beds so as to not spend too much money at once. But the government's lock down has caught me out.  We have at least another few weeks of restrictions, and hopefully during this time I will be able to obtain stock.

Yet it is not all problems. My apple and plum trees are blossoming nicely, and I have seen foraging bumble bees, which will pollinate them.My young pear trees show some positive signs of producing more fruit than they did last year, and the blackcurrants are looking healthy after a pruning.

Furthermore, early in the pandemic I decided that prudence was the best policy, and that as I could not guarantee that I would not get the virus in severe form [ I am 69, an age at which I could expect to be very ill and be out of action for some time] I would get some planting done early.  On March 17th, St Patrick's Day, the traditional day for planting potatoes in Ireland, I sowed two large raised beds with first and second earlies respectively. Having waited a week or so I planted a large raised bed and two smaller ones with onions, the wait being due to the threat of frost. But the Spring has been  warm, so I have little to fear from frost, especially as raised beds warm quicker than the ground does. I laid down fertilizer on the beds and due to the dry spell watered the beds every few days. I also have planted carrot seeds and have yet peas to plant. I have some salad seeds to plant as well.I will use some pots already containing compost and maybe some of the home made compost.

All problems are surmountable. Hopefully, by the end of summer I will report back to readers with news of a good year's cultivation.

Seeds of plants used for salad.

frankbeswick, Thank you for the practical information and the product line. The vintage garden path-prettified mug is my favorite. I try to imagine, without success, what silverware goes well with the mug, whose pattern I successfully imagine for an entire set of plates, platters and saucers.
What are salad seeds?

Our Easter meal was just the two of us. We spoke to children and grandchildren on the phone.Joshua, aged 2, wanted a Baby Ben story on the phone, so I quickly concocted a brief one. Baby Ben is the world's naughtiest baby, and Joshua loves to hear of his mischief! It's all baby mischief.

Mass was streamed on U tube,jointly celebrated by a friend of my son, Peter, Joshua' s father.

The weather here is turning colder and in parts of Britain, not here, there have been thunderstorms, though not bad ones.I am fortunate that my experience of tornadoes is very limited.

I wish you well and God Bless with the tornadoes.

Our Easter was a family meal with just us, no guests. Mass was on television at the cathedral celebrated to empty pews by the archbishop. He has given a dispensation for the time we are not gather, although I do not believe a formal dispensation was needed under the circumstances. We had a few brief power outages, and expect the high winds to foreshadow a line of thunderstorms. Some tornadoes have already occurred in the state, although quite a distance away. It is coming this way, although not the worst of it.

I am feeling pleased today. I spent two productive hours at the plot re-organizing, weeding and watering and then walked home. The walk took 35 minutes, which was by best time so far. It gave me confidence that I can overcome these medical problems.

Here the nursery business is too good. They are open, but there are too many people to risk going. No garden this year. Maybe, if things get better, winter squash in containers will be possible, along with a few other winter items. Last year my new puppy, now over 70 pounds, picked my tomatoes as small green balls, ruining any hope for a harvest. I have gone to containers as age moves on.

Today I decided to deal with the shortage of compost by extending the low maintenance part of the plot. This is thee fruit section. I can use softwood cuttings taken from my jostaberry and gooseberry bushes.I will put less emphasis on annual vegetables, at least for this growing season.

One thing worth mentioning is we know not who has handled produce in a store, but from one's own garden there is much less chance of the vegetables carrying the virus upon them. Gardening now is a way of having a safer food source. Here people are being asked not to touch anything they do not intend to buy, but people do not follow directions well as a group. 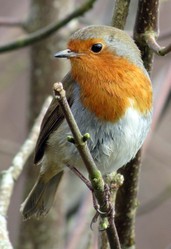 Reflections on the Monarch's Death10 days ago

The Rings of Power: initial thoughts21 days ago

I was privileged to enjoy a day as a helper at the Tatton Show, 2016
Loading ...
Error!