Late Winter in the Garden

The are joys of the first intimations of Spring, but they are marred by frustrations, in my case not all horticultural

You can see that Spring is awakening as the buds, driven by the endlesss cycle of the seasons, begin to be visible. But the earth is still cold, the weather inclement some of the time and currently in Britain rather cold as the position of the jet stream sucks down air from the Arctic. It has also been quite wet, which never helps.But gardeners take these obstacles in their stride, however for me there has been an extra difficulty that has cut down my allotment time. But it was a very welcome one.

The Difficulties of the Season

Sitting in the car  on the way back from the hospital yesterevening I remarked to Maureen that the crocuses in the hospital grounds were springing up, a riot of dark blue gainst the dullness of the season and visible in the lamplight.What, you may ask, was I doing at the hospital? Well so far only one other Wizzley writer knows, and she is family. Nine days ago, the day was fine and I was sipping tea before my planned morning at the allotment when Maureen burst into the room nearly in tears, saying "Baby's coming." Our daughter-in law had gone into labour at twenty seven and a half weeks, prematurely and was later to need an emergency caesarean. My third grandchild was on the way, far too early!  The day's gardening did not happen. Later that day she delivered a fine, though small son who is now just out of intensive care and into the high dependency unit. But it has been a trying time for all, especially the two parents.

I usually use the car to get to the allotment, but the car is now in demand  [we only own one car] as Maureen ferries members of the family to and from the maternity hospital. Yesterday Andrew and I took advantage of the fine weather and went for some digging. But I  have had a few knee problems and decided to take a taxi, though we walked back. Happily the knee held up, the treatment had worked. We had a really productive day digging over some beds. Some years ago I told my Irish mother-in-law that Andrew  digs like an Irishman, which mean energetically and well, she liked that; but already some work had to be missed out. I had been hoping to repair a roof panel on the greenhouse, but the job required step ladders, which we could not carry with us. I had intended to  go to the allotment today [Andrew is at work] but the weather had turned very wet, so I gave it a miss.

Digging with a gammy knee is not ideal, but I had anointed it well with comfrey oil, as recommended by my doctor, and so I was able to work effectively. Together we dug over the ground  and created a lovely tilth. I praised Andrew for his work, but he replied that when he worked for the National Trust for Scotland at the prestigious Threave Gardens he worked for an old gardener who would have called his work amateurish, but some old gardeners grow as gnarled in attitudes as ancient  trees. The old  fellow could make perfect tilth. I am not like him in attitude, I hope,  and never want to be. But we were time limited as Andrew had to pick up his daughter [ my first grandchild] from nursery.

I will be carless almost all the time for several more days until my daughter-in-law is fit to drive again. But that's life.

Andrew is not the son whose wife has just given birth,for I have three sons and a daughter.

Well, I was unimpressed with a famous gardening presenter, who when asked on television this January whether any vegetables could be planted yet, told the lady inquiring that she might plant some onion sets. I was dubious, so I checked with the expert guest speaker at the National Vegetable Society meeting this week and was confirmed in my suspicions- a most definite no. They might grow,but a really cold snap might cause bolting, which is when a plant goes to seed too early. That's the great thing about Horticulture, you can always learn something new, even if like me you are well qualified therein and a thrice team gold medal winner at the Tatton Show. I would love an individual gold, but that's not on the  cards! Being an ordinary team member is enough at the moment.

So what is to be done at this time? Soil preparation is vital, and one of the signs of a good gardener is that he/she does not abandon winter work and save the effort to a frantic rush in early Spring. Lifting the sheet mulch that I put down to suppress weeds and digging over the ground was important, as under the mulch the ground tends to become compacted. Andrew and I dug over a patch on the second plot that my predecessors had covered with tarpaulin. It was well compacted, however all weeds were gone, but the land was short of the blackness that signifies humus and therefore the organic materials necessary for healthy soil. I sprinkled a generous handful of pelleted chicken manure on each freshly dug bed. I prefer the pelleted manure to the raw manure, as it is the far lighter of the two kinds and I am not getting any younger.

But I also need to augment the soil with minerals,as western soils [European and American] are declining in mineral content. I am purchasing some ground volcanic rock dust to sprinkle, especially on the new plot. You only need to do this every few years and as I have done it already on the old plot and the new one has not been done since the previous tenant but one left, I have to work hard on it and apply this remineralization strategy. A rich variety of nutrients always helps, so I am going to apply powdered seaweed meal as well. Just spread it as dust and let the rain wash it in. I have also added potassium by applying woodash from my log burner, so all is looking well on the nutrient front.

I need to prune the apple trees. Andrew, who is the fruit expert of the pair of us, since he worked in a fruit tree nursery for years, has promised to do it, so that is one job less for me to do. I am steadily building up his knowledge of vegetable growing, as he wants a smallholding [homestead] eventually, so he needs the skills and knowledge  that I can pass on.

One job that must await the right time, but which I would rather do now, is painting my wooden garden furniture. Winter has been wet and there has been little opportunity to paint, as the job needs a dry period of a day or two. We have had some dry Springtimes recently, so I might have to wait the opportune moment.

However, we still have this year's Tatton Show to think about. While we won a gold last year we did not win in best in show, which is given to the best of the gold medallists. I have been on a team that won it once  and have developed a taste for it. So we are thinking hard about the step up. I cannot tell you here what is being mooted, but it is a significant redesign, otherwise my colleagues will not be happy with me. However, I am thinking about what to grow as my contribution to the team. A few years ago I  grew a three sisters bed [pumpkins, beans and corn] but that is not what is on my mind at the moment. Don't think spectacular, just think of ordinary grown well.

The only one I know is "The definition of a mine is a hole with a Cornishman in it."

frankbeswick, Thank you for the practical information and the product lines.
I find it quite amusing where you say that "Some years ago I told my Irish mother-in-law that Andrew digs like an Irishman, which mean energetically and well." How is it that a Cornishman, Scotsman or Welshman digs? Is there a saying about how islanders, such as the Orkneyites, dig?

Traditionally in Ireland potatoes were planted on March 17th, St Patrick's Day.But Spring has been coming earlier and potatoes can overwinter in the ground, so there is room for earlier planting. In Louisiana you are about 1750 miles south of me, so for you heat will be a greater problem than it is for me.

I have some problems with cold. Once I lost a crop of Broccoli, which is hardy to minus 18c, but one night the temperature fell to minus 21! I lost an eggplant last year to a sudden cold spell, even though it was in th greenhouse. Last night the first significant snows of Winter fell, though significant for us is far smaller than you get in many parts of North America!

Many years ago I bought tomatoes and eggplants in early March. Then came a cold front, so I did not plant them. I kept them indoors, but they dried out and withered even though I watered them frequently. I revived them, then they dried out a second time. When I did get them into the ground they were still living plants, but never matured to bear anything. Patience will be rewarded.
My wife insists planting should be delayed until Saint Joseph's Day, March 19. But, too much later is a bad idea, since excessive heat becomes a problem before the crop is ready to harvest. Of course far to the south we have heat as a problem.

Wise words. I like to find out about cultivation in climates other than my own. Thank you.

It is so tempting to plant once the weather warms after winter, but there is usually one more cold spell in the spring. On the east coast and midwestern U.S., the safest time to plant is late April, although onions and lettuce can be planted a little earlier.

Well, you have confirmed me in my view of planting times. While you have the advantage of being further south than I am, you need to consider cold spells, so I certainly must. Raised beds are warmer than the ground on which they stand, so some root crops can be planted earlier, but the cold wind that we are suffering at the moment precludes any outdoor planting.

Thanks for your kind thoughts. He will probably have to stay in hospital until late April, when he was due to be born. By then the house that we are renovating for him and his parents will be ready. I am not giving his name on the Internet, as his parents have not announced it yet.

Here our weather is currently spring-like, but cold fronts can change that quickly. Planting needs to wait until late March.
Congratulations on becoming a grandparent again. I hope things go well and your grandchild is able to go home soon. 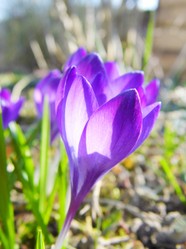 The Snowdonia Slate Trail9 days ago