A selection of t-shirts, tote bags and other great gift ideas for people who like Byzantine-Style Icons.

These paintings of Christ, the Blessed Virgin Mary, as well as the angels and saints, are purposely made to look two dimensional, unlike the three-dimensional statues found in most Catholic churches. That's because the icons are designed to appear like you're looking out a window into Heaven. Since we're still here on earth, we can't see the full glory of God's kingdom. The icons are just a foretaste.

Byzantine icons are found inside the 22 Eastern-Rite churches in communion with Rome and subject to the Pope. But many Roman Catholics enjoy these exquisite images as well.

Saint Michael the Archangel is a Popular Topic in Byzantine Art

Saint Michael the Archangel is one of the three archangels that Catholics often invoke when they need assistance.The others are Gabriel, who announced to Mary that she was going to be the Mother of God, and Raphael, an angel often associated with physical and spiritual healing.

Angels are pure spirits, created by God, who serve as messengers between Heaven and earth. They are also charged with protecting people, cities and towns and entire nations. An archangel is part of an angelic choir that is higher than ordinary angels, and, therefore, they have greater duties.

Saint Michael the Archangel, in particular, is associated with the ongoing battle between good and evil. The name "Michael" means "Who is like God." He is considered a protector of the Catholic Church and of the faithful when they are in danger.

His feast day, which he shares with Archangels Gabriel and Raphael, is September 29.

The Image of Our Lady of Perpetual Help

Our Lady of Perpetual Help, also referred to as Our Mother of Perpetual Help, is a Catholic devotion that has spread around the world. The origins of this image are clouded in mystery. Some say the original image of Mary holding her infant Son was painted by St. Luke the Apostle, a man with multiple talents. He was a physician as well as a painter.

It's believed the second copy, which hangs in a Redemptorist church in Rome was painted by an unknown Greek artist.

Various images of Our Lady of Perpetual Help have been associated with unexpected favors and recoveries, including a copy of this icon that's on display in a church in Boston.

Devotion to Our Lady of Perpetual Help is very popular in the Philippines.

Our Lady of Perpetual Help Plaque

The Black Madonna Icon of Our Lady of Czestochowa

There are numerous so-called "Black Madonnas" in Europe. These paintings and images of Mary, the Mother of God, either depicted her with dark skin, owing to a particular style of painting when they were created, or the skin tone darkened with age, often due to the proximity of burning votive candles.

In some cases, though, it's not really known why the skin tone on some images has darkened. Among the most famous icon, with dark skin tones, is of Our Lady of Czestochowa, which is much revered by the people of Polish descent, in both Poland and around the world. It's believed this image was damaged in a fire hundreds of years ago, which, fortunately, did not destroy the church or the painting.

Millions of Polish pilgrims visit the monastery of Jasna Gora to pray before this painting. There are two distinctive scratch marks on the face of Our Lady. It's believed these occurred in the 15th century during an invasion of Poland. One of the invaders drew his sword and slashed the painting. Attempts to repair the image have been unsuccessful. The scratches always reappear.

Proud to Be Catholic? - Visors, T-Shirts, Bumper Stickers and ... 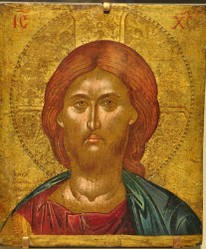 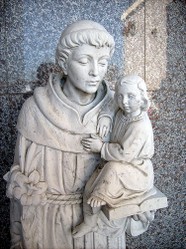 Proud to Be Catholic? - Visors, T-Shirts, Bumper Stickers and More