Reasons to Read Go Set a Watchman by Harper Lee

The anticipated day arrived - July 14, 2015 - when all could purchase "Go Set a Watchman" by the author of "To Kill a Mockingbird", Harper Lee. Come share my excitement!

My husband and I are among many huge fans of the book and movie, "To Kill a Mockingbird", so it stands to reason that I would jump on the opportunity to buy the new/old book by Harper Lee, "Go Set a Watchman" as soon as it was released.

The week before release, the first chapter was revealed to the public in a couple of news publications. I read it, and immediately knew I had to get to know the now-grown "Scout", and learn about how life is in her old home town after the passing of 20 some years. I wanted to find out how her aging father, Atticus Finch, was doing, as well as her brother and other characters that have become comfortable friends after viewing the movie so often.

Since this is a review written just after purchasing my book, there won't be any spoilers in the beginning, but toward the end of this page there may be as I share my impressions while reading. I'll warn you when we get to that point on the page.

So here we go, come and join me on this literary adventure.

For every Negative Review there are Many Positives

It frustrated me a bit when articles mentioned some negative things about Atticus Finch, I'll give you one example. Now mind you I haven't read through the whole book yet, but articles have mentioned that he attended Klu Klux Klan (KKK) events, among other things.

Would it shock you if I told you that my Grandmother on my Dad's side, who grew up in the south, once gave a donation to the KKK when they came to the door? Not everyone was completely aware of what the Klu Klux Klan was all about until news spread over time, and being a kind-hearted and giving person, they tricked her into thinking that they were a good Christian organization.

So I'm going to give Atticus a chance here, knowing that the media is inclined to pick out the controversial and negative things to write about.

Besides, there is much more to Atticus, and I'm looking forward to getting to know more about this man in the latter years of his life.

Available in book and ebook format

The Old is Weaved Together With the New

Another thing that reviews and articles revealed that I liked is that though years have gone by, about 20 years, there are quite a few childhood memories shared in the book. In fact, those memories were the basis for the writing of "To Kill a Mockingbird". According to Wikipedia, "Lee said she had originally written Watchman first, but it was rejected by her editors who were more interested in the flashbacks it contained. They persuaded her to write another novel from the point of view of the young Scout, which became To Kill A Mockingbird." To me, having those flashbacks will give Watchman some of the nostalgic feeling that is present whenever I read or watch "To Kill a Mockingbird".

I don't think it's fair to over-anticipate something, or come to a book with high expectations, especially when you already know the characters from a previous book. Speaking personally, this just sets me up for disappointment.

I am not expecting to be disappointed by this book, however, and as I read it, I'll be coming back here and at the very end of the page, will share my impressions. I'll clearly mark where that starts so that you can avoid that section if you have not yet read the book and don't want to come across a spoiler.

of To Kill a Mockingbird

To See how the Times have Changed the Characters

It's tempting to want characters that we love to never change, to be the way they were when we first read about them, especially if they are as endearing as Scout, Atticus, the mysterious Boo Radley, or Scout's brother, Jem. But that's like expecting our family and friends to not change over the years. Time and life circumstances bring change, and that is what will happen, whether we like it or not in real life, or whether or not we like it in "Go Set a Watchman".

So I'm ready to see how the characters have changed with the times. We are going from the 1930's in To Kill a Mockingbird to the 1950's in Go Set a Watchman, a time when big changes were happening with regards to civil rights and so much more.

I can't wait to get started, in fact, I'm off to start reading right now!

Read the First Chapter of Go Set a Watchman Here

Have You Read Go Set a Watchman Yet?

To Kill a Mockingbird DVD

I didn't know you could view full movies online for free, so am not sure how long this will be available, but it's curated from YouTube and they are pretty good at taking things down when not appropriate or legal, and this one has been available since May

What I Think of Go Set a Watchman So Far

I think I can manage to share without spoilers, if not, I'll warn you in advance.

7/17/15 - I have been spending a little time reading for the past few nights before going to bed, and am on the third part of the book. So far I am enjoying it, occasionally I find myself laughing out loud, and do enjoy the descriptions of the characters. Since I never read "To Kill a Mockingbird", I am not aware of the writers style. I have only viewed the movie.

But so far, I've enjoyed getting to know the older Scout and her Henry, I don't know where things are going to go with them yet. There have already been some flashbacks to their childhood that are pleasant reading. Descriptions of characters can sometimes be funny, depending upon the character. Atticus is prominent in the story and Scouts brother's current condition is mentioned as well. Nothing very dramatic or intense just yet, it's easy, soothing enjoyable reading so far.

Guestbook: (WATCH FOR SPOILER WARNINGS) I'm really looking forward to seeing what you think of the book(s)

@CruiseReady I think you would like this particular movie, it has really become a classic, though devout readers do notice things that happened in the book that did not happen in the movie.

Not being a big fan of movies, I have only seen the stage version of TKAMB, and still need to read it. Now, it seems, i have two Harper Lee books to read! Thanks for this review... I may check back later for the finished versionl

Thanks @Veronica - I avoided looking closely at your other comment...with the spoiler...will save that to post when I'm done reading if you don't mind :-) Thanks for stopping by!

Yes I liked it enormously. IT is more of a coming age drama than anything else.

Please avoid if you don't want to know.

@frankbeswick I think you are right, those who have been raised to think a certain way would see things differently...I haven't read for a few days...am looking forward to getting to that part of the book, to see why it had to be pointed out, and see it in it's context.

Are we to think of Atticus being racist, or must we think that it is inevitable that people living in the southern states have complex views? The source of the criticism of Atticus is political correctness; which has led to far too many accusations of racism against innocent people, and we should never let this pernicious form of bullying/persecution dominate/cloud our judgment.

@Veronica I still have a ways to go in the book, but like To Kill a Mockingbird, except for the trial, it is more the day to day of life in the South in that era, laid back kind of reading, relaxing reading so far, and if that doesn't change, I'll still have liked it.

I was given this book for my birthday on Tuesday. I am on part three chapter 8 and I must say nothing at all has really happened yet. 7 chapters and not much happening !

I have seen in reviews that Atticus becomes racist and I don't know the details yet , But I am assuming that it maybe showing that people keep old prejudices hidden and can't do so as they age or that maybe circumstances there have changed whilst Scout has been away and he has changed his opinion. I shall read on dear reader.

@frankbeswick I agree with you...I did think highly of Atticus in Mockingbird so it will be interesting to see what he grew into in this book. Thanks for the visit and comment. 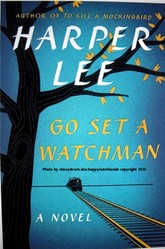 Corrie ten Boom and her family are known for helping Jewish people during WWII. She survived the notorious Ravensbruck Concentration Camp, she is loved by many...here's why.
100%  23   18 happynutritionist
Wizzographies