GRENADA - Nutmeg Production in the Spice Island of the Caribbean

It is now a tranquil holiday destination with tourism the main industry but Grenada remains one of the world’s largest suppliers of nutmeg and mace.

It is said that the best way to arrive is by ship, as you can smell the cloves, mace, and cinnamon long before your ship docks in Grenada's capital, St. George’s. Tumeric (known as saffron on Grenada), bay leaves, pepper, ginger, pimento and vanilla are also grown in abundance but far and away the most important are the twin spices of nutmeg and mace. Grenada grows more spices per square mile than any other country.

What to do with the incredible Nutmeg

You cannot miss nutmegs on Grenada. Drive anywhere on the island and you are among nutmeg trees which, for the uninitiated look like apricots. The nutmeg is actually the kernel of the fruit; the surrounding fibrous cover when split open reveals the red mace.

This invaluable spice used worldwide by famous chefs and housewives has more than a culinary use. Mace is also an ingredient in lipstick and nail varnish and the shell of the kernel is used as a mulch and as a fuel for burning. As well as grating the nutmeg into dishes, it is made into jam and spices, syrup for the famous Grenadian rum punch, added to fruit salads and pancakes and used to baste Caribbean chicken.

Not only that but nutmeg has a long tradition in folk medicine, yielding an essential oil used in aromatherapy massages for rheumatism and arthritis and as an inhalation oil. It is also claimed that if you receive a nutmeg on New Year’s Day and carry it with you all year that you will be protected from broken bones, haemorroids, scarlet fever and strokes.

Visitors to Grenada should ensure that their stay there includes a visit to a factory where the mace and nutmeg are processed.  Tourist offices will direct you, or your hotel or campsite will have details.  Guided tours usually last about 20 minutes or so and during this time you will visit the areas where the fruit is cracked, graded via a water test, and stored.

Spice up your Sex Life

One 17th century story has it that to make a woman or man compliant to your wishes, you should swallow a nutmeg whole, wait until it passes through you, then grate it into the beer or wine of the desired one.

Not only was it the rohypnol of its day but it was also the viagra of the day – applied externally!

A Brief History of the Island of Grenada

The first known inhabitants were the Ciboneys who were believed to hail from South America and they were followed by the Arawak Indians.  But Before Christopher Columbus came across Grenada (which he initially named Concepcion) the island had been inhabited for about 500 years by the fearsome Caribs (hence Caribbean). The change of name from Conception to Grenada came about because the mountainous island reminded some sailors of the Sierra Nevada that backs Grenada in Andalucia, Spain, and the name was adopted.  Later, the British changed the spelling to Grenada.

In the intervening years between then and now the island was fought over by the British and French until Britain managed to tighten its grip in the late 18th century.  Sugar, spices, tobacco, coffee and cocoa had became important exports during the intervening years and slaves were imported from Africa to work the plantations.  Emancipation in 1834 brought a halt to this terrible trade.

Grenada became a Crown Colony n 1877, an associated state in the Commwealth in 1967, then became fully independent in 1974.   After a short flirtation with socialism for a short period in the late 70’s, a general election in 1984 established democracy once again.

Lush countryside, white sands and warm seas ensure its popularity with tourists today whether they arrive via plane or ship and it is a popular stop for ships on the Carribbean cruise route.  The capital, St. George’s, is built on the side of a volcano which surrounds a horseshoe-shaped harbour.  Apart from the well-preserved French and English colonial architecture of the town, the island is home to some very interesting Forts; Fort George built in 1706, Fort Frederick in 1791 and Fort Matthew, the largest fort on the island, which was named after the then governor Lt. Edward Matthew.

And above all, there are the spices – and the rum.

Seems as a wonderful destination. The nutmeg production tour would be a plus! 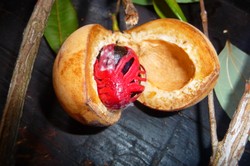