Growing Up in Smalltown America

These are some tales of what it was like growing up in Lebo, Kansas in the 1970s.

Back in July 1998 I moved from Kansas to the United Kingdom. I went from a State with fewer than 2 million people to a metropolitan area with over 7 million.

I remain at heart though a small town gal. When I think of small towns, I immediately think of the town where I grew up. Lebo, Kansas.

This small town in east-central Kansas has been part of my family for generations. My mother's family all came from Lebo and the surrounding area back at least 3 generations. My father's family came from the nearby town of Osage City in Osage County and had been there for the same length of time. The same doctor who delivered my mother when my grandmother gave birth to her also delivered me when my mother gave birth to me.

Even today, after having not lived there since the 1970s, I could tell long-time residents my name and they would respond with "You were Tom and Pearl's granddaughter aren't you." 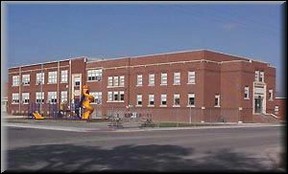 Primary school, junior high school, and high school all in one building.

Back then, the younger grades would have recess in the front of the school here pictured. They put barriers up blocking the road out front from traffic and we would play on the street as well.

Popular games included 4-corners, red rover, red light/green light, and generally running around while climbing all over everything. We didn't have all this soft protective foamy stuff either to protect us. It was rock hard ground with gravel underneath all those slides and climbing frames. I got plenty a scraped shin and knee playing out there.

The school was located just over 2 blocks from our house, less than that if I took a short cut through the middle of the grain elevator located across the road from our house. I walked to school and home again by myself from age 5. I think my brothers would have laughed had anyone suggested they should escort me to or from school.

Looking over the old family farm

We were outside until supper time in the summer

This was pretty much the extent of the downtown area when I lived in Lebo. The large building 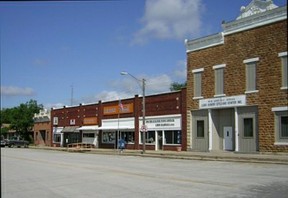 on the corner was Bailey's IGA. Next to that was the post office, Doc Hunter's office, then Allegre's drug store.

On a summer's day you would find bicycles propped up outside the doors of the drug store and the IGA as we trooped in and out buying soft drinks and candy. Barefoot. I don't think any kid under age 10 wore shoes in the summer months. In or out of any store.

Until the large park was built in the early 1970's we would play all over town. In and out of houses, our own and our friends and relatives. My grandparents moved into town from the farm in 1975 and even after moving into town they never locked their doors, nor did my aunt and uncle who lived on the other side of town.

When a house was being built next door, we played on the building site. After a big storm came through around about 1974/5, we built forts out of all the fallen branches that were stacked 3 or more feet high and several feet deep along a 10 foot stretch. I remember being absolutely devastated when the County came through and hauled all those tree branches away.

Another favourite place to play was the little stream near our home where we could catch crawdads. Once caught, we could take them down to the local bait shop and get about 5 cents each for them. This was good money when we could get a large handful of candy for a dollar. And sit at the back of the drug store and read comic books while eating it. People may eat them, but back then they were fish bait.

After Jones Park was built, we would be there in the summer. This was the beginning of the skateboard craze and every kid had one. Forget playing tennis or basketball. We were too busy riding our skateboards there. Skateboard parks with ramps and such wouldn't exist for at least another decade. 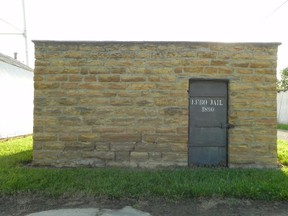 y around the old city jail. Unfortunately, someone was thinking and locked the door, but we'd climb on and around it, and speculate on whether or not someone could climb the water tower sitting next to the jail. None of us ever did that either.

In the evenings and all day on Saturdays would be baseball and softball games. Come autumn and winter the high school football team would be playing on the field. The whole town would be at the field on a Friday night to watch the varsity team play.

Every 4th of July the City would put on a major celebration at the park with baseball and softball games during the day, special events at the swimming pool, finishing up with a large fireworks display.

When the swimming pool was built, we would go out as a school group and watch them digging and pouring concrete. After that, in the summer you could find us at the pool. Or bouncing between the pool and watching a baseball game.

We'd leave home in the morning, slip home long enough for lunch, then back out again until dark. Don't think we could get away with anything though. This is a small town. I used to swear that news could travel from one side of town by mouth to the other faster than the telephone lines could carry it.

Didn't matter who you were, everybody knew who you were and who your parents and grandparents, and second and third cousins twice removed were.

What's there to do

When you hail from a small agricultural based town, there are a few clubs and organizations that you are practically expected to take part in.

My older brothers were both in Boy Scouts. I was a Girl Scout. I was lousy at earning badges, but I dutifully went to the meetings every week along with most of the other girls in my class at school. We went on camping trips in the summer and took part in other Girl Scout activities during the school year. And we sold Girl Scout cookies. To everyone in town. We all went door to door selling as well as hitting up family to buy cookies.

Never heard of it? Check this wiki article on 4-H clubs.

This was a group that my entire family was active in and had been active in since my mother was young. I did projects related to cooking and sewing. And gave speeches about nutrition and how to create different sewing projects at competitions. We also got to participate in the County Fair and if we were fortunate enough too obtain a Purple Ribbon at the County Level we got to take our project to the State Fair in Topeka. My first time I won a Purple Ribbon I was too young to go to the State Fair and I was so disappointed. 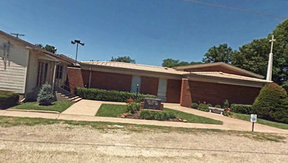 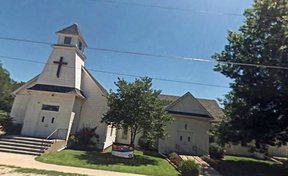 In smalltown America, everyone goes to church. Lebo was no exception. We had two churches in town. The Baptists were on one side, the Methodists on the other. My family all went to the Methodist Church.

And while nothing was ever really said, I got the impression from what wasn't spoken that there was something just a little bit suspect about those people who went to the"other" church across town.

My earliest memory of church was in the Sunday school class. I just remember crying and crying after being left in the nursery class to the point that they finally took me in to the class with older children that my grandmother taught. I was happy after that.

Have you been to Lebo, Kansas?

The place you grew up in always remains special. A lovely history of Lebo!

This is the most enchanting model village I have ever visited. It is like stepping back in time and has many sets that will make all of us sigh with nostalgia.
70%  10   6 katiem2
The 80's