Memories of the age of steam are a precious connection with a golden and somewhat romantic age.

Steam trains nowadays are relics, dragged out for public occasions and regarded like elderly relatives, welcomed, celebrated, but past their time. I know how they might feel. But I can recall the age of steam. I have traveled on steam trains, smelt the smoke and seen the sparks. When I speak to children about this type of travel their response is wonder as they are drawn to a distant age which will not return. While we might go back to water wheels we will not return to coal. So what was it like to have seen steam engines and traveled on them?

The image above is a public domain image

Some time in the 1990s, the precise date is irrelevant, Maureen and I took our children to York, where we visited the Railway Museum, and I had a poignant moment.As we stood and gazed at the streamlined giant, the Mallard, I said to them, "Your great-grandfather mended the boiler on that." My father's father was a boiler-maker employed at the once great railway depot in Gorton, Manchester, colloquially known as Gorton Tank. He had gone there after World War 1, in which he had been part of a mobile boiler maker squad that mended ship's boilers, and had spent time in the North East after the battle of Jutland. To Gorton were brought steam engines great and small, including the record breaking Mallard, which on the East Coast route had reached the then unequaled 138 miles an hour, to be repaired and serviced. On that occasion I reached through the years to the grandfather that I never met, for he died ere I was born, and whose photograph my father kept in his bedroom until he died. I also returned  to my childhood years, when Mallard was still advanced technology. My children were able to reach out for a brief encounter with an ancestor long gone and an age that had vanished.

My earliest memory of a steam locomotive was of one in Blackpool, the famous resort for the Lancashire Working Classes. We were staying in a guest house, near Blackpool South Station,now closed, when during the night my brother Tony was slightly poorly. Nothing serious!  [Veronica  won't remember this as she was not then born.] While Mum and Dad were tending Tony, I stood on my bed and pulled back the curtains, and there in the semi-darkness of the night was a dragon spitting sparks from its funnel. There was nought wrong with it, but the darkness highlighted the sparks hidden by the daylight in which I normally saw engines. As a child the contrast between darkness and fire in the setting of a platform on which people disgorged from the carriages, activity in darkness, imprinted in my memory. I am no artist and so cannot draw the scene, but it remains a powerful childhood memory.

Steam was part  of the aura of another age. On holiday in the early and mid 1960s we went to North Wales,  where we stayed in  a holiday camp that adjoined a railway line. To give our parents a rest, Tony and I sometimes took the two younger ones to watch the trains.They loved it. My memories include Veronica standing on the railings of the fence and waving to the steam engine crew as the express thundered past belching steam on its way to the Isle of Anglesey, where its passengers would catch the ferry to Ireland. It is amazing that we children could enjoy such simple pleasures, but it is good that we could.

Gone is the Water Tower.

Part of the experience of travelling by steam was stopping at the water tower. These were tanks kept constantly replenished by the tracks, where at times  we stopped. The fireman, for we had firemen then to stoke the fires, would alight and take the large hose to fill the boiler. I can recall seeing him once as he alighted. We had to wait for the steam pressure to rise again before we could go on our journey, but the fires were kept well-stoked and the delay was not long.Years later we could see forlorn, abandoned water towers by the tracks as the diesel trains that had rendered them redundant sped past. They are gone now, sold as scrap.

Gone also are the old signal boxes, though you still see the occasional one, a fossil from an earlier age, whose innards gather dust in mournful silence.  The mechanical signals went with them. We might feel  bit nostalgic,but the modern system of lights is an improvement. The modern systems are computer controlled and do the job well. We cannot be Luddites! But there was a charm to steam that the modern system does not possess.

But the sensory memory was the smell. There  was at various times the slightly pungent scent of burning coal. It was distinct, the scent that we found in towns with old coal fires before we took to gas. I recall it as the scent of Gorton,the industrial area where I grew up till I was five and where my grandfather had worked at the railway works. The distinct aroma of coal smoke lingers with you throughout the years.  You never forget it  and even now it evokes childhood memories, though I smell it but seldom now.

Carriages varied then, and sometimes we had compartments that contained only six seats accessed by a corridor,  very comfortable and private, but on lonely nights people were vulnerable to assault. These have been discontinued. I liked them, but I can see the point in their discontinuation for safety  reasons. But the corridor carriages proved useful in the Second World War for moving German prisoners of war. My father recalled doing so in North Africa, where he nervously sat at the end of the corridor with a bren gun guarding a carriage load of SS troops. These guys were apt to break out and might have to be shot if they did. Fortunately they didn't, so all was well.

Gone also is the tender, the coal wagon that trailed behind the engine from which the fireman shoveled coal into the coal into the furnace. Being a fireman was a hard job that involved great physical effort over the course of a  journey. Back home in Stretford I used to talk to an ex-fireman.Years after the last steam engine was decommissioned he was still employed as a ticket collector. An Asian man, he had come to England to work and had been employed by British Rail to shovel coal. So he must have been one of the youngest firemen at the time, for most have long gone into retirement, as has he now.

We are nostalgic for a gentler, older Britain, a land not driven by harsh management culture as it is now and has been since the time of the late, unlamented Mrs Thatcher. When we train-watched in Wales we used to wave to the train crews, who waved in return. Would management allow this now?

What also really annoys me is the injustice to rail staff.  My grandfather, as a railway employee, used to have free rail travel throughout the country, and he used it to follow his beloved Manchester United, taking my father with him to watch football matches. When they went to away games father and he in slept in railway men's hostels. Precious times between father and son. But when the Conservative Government  privatized the railways , free travel ended, at least for workers. The executives still enjoyed free travel round the country. So the ones who needed the perk least retained it and those who needed it most lost it! Social justice? Not in Conservative Britain!

We still see the occasional steam train, generally run by enthusiasts on private lines. Narrow gauge engines are the commonest. The Flying Scotsman, which used to take mail from London to Scotland and which inspired Auden's poem The Night Mail, still operates to provide occasional special functions,at which it brings out the crowds as it powers past.

This is the night mail crossing the border

Bringing the cheque and the postal order

This begins the long poem whose rhyming couplets are intended to convey speed and power.It also captures another age now past. We cannot go back to steam,but the steam age had its attractions, which we should cherish and preserve.

Our land is smaller than the USA, so we don't have anything on an American scale. The steepest railway is the funicular East Cliff Railway near Hastings in Kent, which has a gradient of 78%. The steepest steam line is the narrow gauge Snowdon Mountain Railway, but I am unsure of the exact gradient.

Revisiting your wizzley brings to mind something that I'd meant to ask back in June 17, 2017, when I read the other comments (which I always do).

dustytoes brings up the train ride up Mt. Washington in New Hampshire. That ride can be quite an unexpected experience: the 7.6-mile (12.23-kilometer) ascent goes at a rather unsettling upward angle upwards. It's even more unsettling to go down than to go up. The train had to be offering the same experience.

Is there any similar geographic feature on your side of the pond? (Internet sources say that the average grade is 12 percent for all but the last 100 yards [91.44 meters], whose grade is 22 percent. I would have calculated a bit more ;-} !)

Frank, I love trains, but have only had short trips for tourist! What a lovely ride for you and Veronica!

Derdriu, I have looked up Stanley Steamer cars and found that there was an English company, Turner-Miesse, that produced steam cars until 1913. Morriss produced them until 1912. Vintage steam cars have entered in the London-Brighton vintage car rally,a journey of sixty miles. The last steam car entrant that I heard of was one in 2014.

I think that I saw that train at Doncaster station. You could see that the whole train was dedicated as a restaurant. I thought that it was wonderful.

frankbeswick, Thank you for this lovely tribute to steam trains. It's sad to read that workers do not get to ride free any longer since they worked hard and certainly would not abuse the privilege (and probably would encourage rail traffic by acquaintances, family, friends and peers). Did the United Kingdom ever have the equivalent of the steam-powered Stanley Steamer cars?

My husband bought me a trip on a steam train across England with an English afternoon tea on board too. It was a lovely birthday gift a year's back. .

You're welcome Frank. Definitely worth doing if you are ever in that neck of the woods.

I have never before heard of the Cog Railway.Thanks.

What a wonderful trip down memory lane!
My latest train trip was on the Cog Railway which goes to the top of Mt. Washington in New Hampshire. I mention this one because it offers a steam engine ride, as well as diesel trains. It's not exactly like riding the old steam trains, since these engines push the cars up the hill. 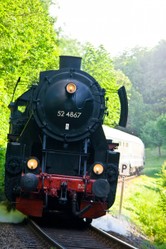 This is the most enchanting model village I have ever visited. It is like stepping back in time and has many sets that will make all of us sigh with nostalgia.
Loading ...
Error!