An article that explores the question 'Is Hermione Granger more popular than Harry himself?'- I draw on a few different strands of evidence including, believe it or not, costumes!

You may be forgiven for thinking that Harry Potter, as the hero of the Harry Potter films, is the single most popular character of his generation. But I would like to argue the case that it is actually Hermione Granger that is now the undisputed hero of our age!

Roll Over Harry Potter- Hermione is in Town!

It's Girl Power all over again!

When it comes to Harry Potter, its my (admittedly controversial) opinion that Hermione Granger has now become more popular even than the hero of the film himself! I always think that J K Rowling had the intention of creating Hermione as a really strong female character, but I don't think even she could have forseen how popular this character has become!

Hermione Granger embodies the notion of 'Girl Power' in a way that Jerry Halliwell and her cohorts could never ever live up to. She is a fiercely intelligent girl. Her intellect overshadows and 'dwarfs' that of Ron and Harry. You just have to read the book and watch the films to realise that, whenever the boys need help with their studies or to solve a particularly 'knotty' problem, it is to Hermione that they both turn. She pretty much comes top of every one of her academic classes, and is unrivalled at school for her grasp of so many different subjects!

But it's not only intelligence that she has at her disposal. She is also quick witted, and every bit as brave and courangeous as her two pals. There are so many examples in the films where Hermione literally steps in and 'saves the day'. All in all, she has become an incredibly powerful role model for young women around the world!

So popular now is she with fans that when it comes to Harry Potter Fancy Dress, the Hermione costume now actually outranks the Harry Potter robe for sales. And let's face it, you can't argue with the cold hard facts of commerce!

One thing I would like to add is this. Whilst it is undeniably true that J K Rowling has fashioned a truly wonderful and complex character in Hermione, it is also equally true that it is the young actress Emma Watson that brought her to life. And what a wonderful job she did as well!

I would be very interested to hear any replies or ripostes to this argument from fans of Harry himself, though of course I doubt that they will be able to outwit Hermione!

Hermione- A One Girl Revolution

Check out these cool cut outs featuring Hermione and Pals! 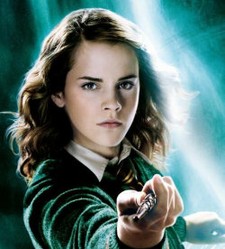 An Unexpected Journey is the first of two Hobbit movies by Peter Jackson.
Loading ...
Error!