Review of the Battle of the Five Armies

The final film in the Hobbit Trilogy is well made, though there is some dramatic licence in the screenplay, but it is an improvement on the unnecessary second film in the trilogy.

Tolkien readers/fans have been awaiting the final film in the Hobbit Trilogy with a mixture of anticipation and apprehension. Would it be full of needless additions that did violation to Tolkien's vision? However, having seen the film this afternoon I am happy with it, even if as a Tolkien purist I might be excused for becoming annoyed by the departures from the text, which are less here than they were in the previous film.

Picture above courtesy of Dynamixx

The Death of Smaug

This bit of the tale is etched in my memory, because as a child I heard Tolkien reading the Hobbit on the radio. The passage was Smaug's death. Sadly, neither of my parents were fantasy readers, so I did not hear more of this enchanting tale until later, but the image of the archers holding their ground stuck in my young mind. Bard is something of a hero to me, as he represents the stalwart English man, one stubborn in defence of his home, and the archer is historically the quintessential Englishman. The character of Bard lives up to Tolkien's vision, even though dramatic licence is taken with his dialogue with Smaug, which is not in the text.

I found the visual portrayal of Smaug's attack to be impressive. The aftermath on the beach as the survivors gather is quite realistic, and the character of Bard is effectively portrayed in this section. The end of the master is not as it is in the book, but there is some dramatic effect in it and one cannot but enjoy it. The character of Lickspittle is unnecessary and is a dramatic addition, maybe for comic effect, though I did not find him funny.

Extra material not in the Hobbit

Some purists may have doubts about the battles in Mirkwood, but they are mentioned in the Hobbit. We are told that Gandalph just managed to escape the Necromancer, Sauron, but the film has Gandalph imprisoned, which is not faithful to the book. However, the Hobbit does have Gandalph speaking about his role as part of the White Council that drove the Necromancer [Sauron] from Mirkwood, so when this became part of the film it was at least true to the text, even though the Tolkien did not include it in the narrative.

The character of Tauriel is another addition to the text, though as the actress who plays here points out, Tolkien never says that the elves are exclusively male, and this is a valid point. She plays her role well and despite being an addition to the text viewers will feel that her presence adds to the film.

There have been criticisms of the role of women in Tolkien, but feminist criticisms on this matter  are in general misplaced. While there are few women in the text, none are stereotypical. What few women are present are strong characters not given to talking only about men and babies. Tauriel is such a female, a warrior maiden with a strong role in battle. However, I found her affection for the dwarf Fili an unwanted addition to the Tolkien narrative. Tolkien was not a romantic writer.

In fact, many people do not realize that  the Middle Earth tales are war novels derived from Tolkien's experience of World War 1. Thus they are very much about male combat fellowship, the bonds that grow between warriors who fight together and the inevitable grieving for the fallen. They are therefore unavoidably male books. I think it important that political correctness be not allowed to impose a formulaic politically derived gender division upon texts. While books will normally have a blend of male and female characters, it is inevitable that some books will have more of an emphasis on one sex over another. Some will be told from a male standpoint, and others from a female one. This is to be welcomed as an expression of diversity.

Jackson is faithful to the broad pattern of the story, in that five armies fight. This section turns the film into an action movie, with an exaggerated battle component.Tolkien did not describe fights in the greatest detail, primarily as he had been in enough of them. Yet the screen play is powerful and keeps the audience enthralled.

The character of Thorin Oakenshield is well played and while his ending is not exactly as it is in the text, it is not a great deviation from the written narrative. I was, however, irritated that Thorin's reference to his destiny after death in the Halls of Waiting was omitted. Tolkien did speculate on the afterlife of men, Elves and dwarfs, so why omit this important statement of Tolkien's thought? Jackson's screenwriters did not think it important, but Tolkien did, and they are not being true to him. The Middle Earth films are about war and death, and what comes after death matters to men fearing that they might die young.

The return to the Shire was a final act of comic relief in a film which allows little role for comedy. This may be a problem stemming from turning one short book into three long films.

In conclusion, I went fearing that I would be underwhelmed by the film, as I was with its precursor, but I was happy to be proved wrong. This film does not replace the book, films never do. But it was enjoyable.

I was too young to be able to deal with Tolkien's voice range, as I was under ten years old at the time. Sorry!

frankbeswick, Thank you for the practical information, pretty picture and product line.
What is the location of the waterscape in the image next to your title?
Do you remember what voice range J.R.R. Tolkien had and whether he read an extract or, presumably over a series of broadcasts, the whole Hobbit?
Norman Maclean mentions in A River Runs Through It (the first fiction book published by the University of Chicago Press) that his father told him that different mediums (such as living versus writing about life, filming versus writing) may not be true to one another when they tackle the same person, subject or thing. That might explain why an inconsistency works when it does (although I prefer commitment to the original). 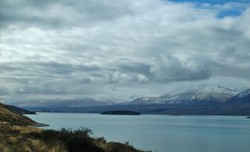 The Harpole Burial15 days ago

The English Hedge27 days ago

A rant about why the Star Wars Prequel movies were bad.
Loading ...
Error!