Sunchokes, also called Jerusalem artichokes, look something like ginger roots but are more rounded. They have a sweet, nutty flavor and the texture is firm and crisp.

The sunchoke / Jerusalem artichoke plant, Helianthus tuberosus, grows quite tall. The flowers are bright yellow and look similar to a small sunflower but without a brown center. They don't produce seeds like a sunflower but produce edible tubers (roots).

Sunchokes store inulin (not insulin), breaking down into fructose instead of glucose during digestion. Diabetics can substitute them for potatoes.

Sunchokes /Jerusalem artichokes can be substituted for fresh jicama, water chestnuts, and almonds in salads, salsa, and other cold dishes.

You can also bake them, add them to soups, or in other hot food recipes.

As with any new food, try a small amount at first. Sunchokes may cause some people to have gas.

About the Sunchoke / Jerusalem Artichoke 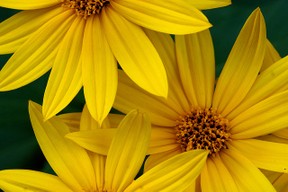 Sunchokes are native to North America. This is a photo of the flowers.

In the early 1600s, the explorer Samuel de Champlain first saw sunchokes growing in what is now Massachusetts and brought them to Europe.  Champlain thought the sunchokes tasted like artichokes.

Sunchokes were eaten by the explorers Lewis and Clark during a time when they could find little food on their expedition.

During a famine throughout Europe in 1772, the sunchoke was quickly grown to prevent starvation.

During World War II, sunchokes and rutabagas were the most common vegetables available. In some countries, you could buy sunchokes without a ration card.

No one knows for sure, but the Italian word "girasola" means "turning toward the sun," a reference to the sunflower. "Girasola" may have later become pronounced as "Jerusalem" and then "artichoke" refers to Champlain's description of its flavor.

I haven't been able to find where the word "sunchoke" came from and why it's used rather than the American Indian word "sunroot."

Ways to Use and Prepare Sunchokes 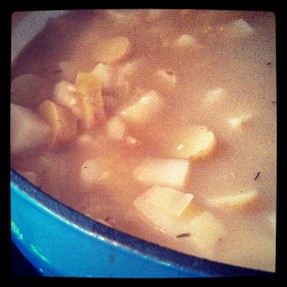 If you buy sunchokes from a grocery store, choose tubers that are firm and fresh. Keep them in the vegetable drawer of your refrigerator until you use them. Wrap them in paper towels to absorb humidity and seal them in a plastic bag.  They probably won't keep longer than two weeks, depending on how far they were shipped and how long they were in the store.

You don't need to peel sunchokes; the skins are thin. Use a vegetable brush or toothbrush to clean them.

If you plan to use them raw in a salad, don't cut or grate them until just before serving because they'll oxidize quickly and turn dark.  If you must cut them early, put lemon juice or vinegar over them.

Like potatoes, sunchokes can be baked, boiled, steamed, fried, stewed, and microwaved.

Don't use aluminum or iron pans. The metals will cause oxidation and turn the vegetable dark.

Sunchokes cook faster than potatoes and can turn to mush if you don't watch them closely. Remove them from the heat as soon as you can easily pierce them with a fork or knife.

Cooked sunchokes should be refrigerated and eaten within a couple of days. High levels of iron may cause stored cooked sunchokes to turn gray, though. Add 1/4 teaspoon of cream of tartar or 1 tablespoon of lemon juice or vinegar to the cooking liquid when reheating.

Acids will strengthen the texture of sunchokes, so if you want them to be softer, add the acidic juice during the last five minutes of cooking.

Don't can or freeze sunchokes because they discolor and their texture gets mushy.

Give sunchokes a try, either raw or cooked.... or both. 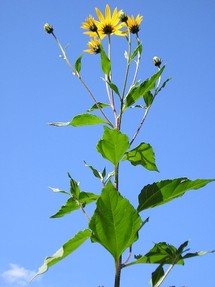 Sunchokes can be grown throughout the United States, but they don't grow as well in very hot climates or in ground that is acidic or stays wet most of the time.

Plant tubers from late January to mid-April, making sure they haven't dried out before you plant them. The plants can grow up to 10 feet tall so they can be used as a windbreak or to hide a fence or eyesore.  But consider what else you're going to plant nearby because sunchokes will create a large area of shade.

Plant each tuber about 6 inches deep and about 2 feet apart.  If your tubers are small, plant two or three together.  If you plant more than one row, place the rows 3-5 feet apart.

CAUTION:  Sunchoke tubers spread!  Plant them far enough away from the rest of your garden so they don't take over, or else create a root barrier around them.  You'll want wood pieces or metal sheeting placed vertically around the garden, about a foot deep. You can also plant tubers in large pots, staking the stalks as they grow tall.

Keep the weeds out at first, but once the sunchokes begin to grow tall, they'll shade the ground and keep out the weeds.  Occasionally check on the plants to see if more dirt needs to be added because tubers should not be exposed to light.

I found sunchoke tubers for sale on Local Harvest.com and I've seen some on ebay.  If you buy any at a grocery store or Farmer's Market, you can plant them, too, but make sure they're fresh and haven't  gotten shriveled or hard. 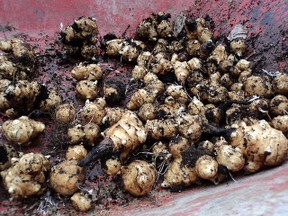 You can harvest your tubers in the fall after the plant tops are dead, or leave them in the ground over winter and dig them up in the spring.  If you leave them over the winter, put a thick layer of mulch over them.

When you cut your plants down, leave part of the stalk in the ground so you'll remember when each plant is.  Although it's best to only dig up what you can eat in a few days, you can harvest all the tubers if you store them in a cool area and keep them covered in soil so no light reaches them.

To dig your tubers, use a spade or pitchfork to dig a circle around each plant.  The tubers are close to the surface and have fragile skins, so be careful where you dig.

Once you loosen the dirt around a plant, pull on the stalk and you'll see the root ball.  It'll have many tubers attached to it but there will still be smaller tubers left in the ground.  You can leave these tubers to dig up later, but if you leave them in the ground, they'll start growing new plants in the spring.

If you have a compost pile, you can put the stalks in it but make sure you don't add any tubers. They'll start growing in the spring; even a cut piece from a sunchoke tuber will grow into a plant.

Harvesting 25 Pounds of Sunchokes from 2 Plants

Have You Tried Sunchokes?

We grew sunchokes years ago when we lived on the central coast of California (in our backyard garden). To me, the flavor tasted a bit like sunflower seeds, a bit like potato, but rich and very nice. We ran them along the length of our garden fence and they were easy to grow. Nice article!

jptanabe - you might try planting a few tubers in pots and maybe the groundhogs and rabbits won't eat them. I don't know about the deer - they might eat the greenery when the plant is short, but probably couldn't reach it when the plant is fully grown.

I first tried sunchokes when the CSA I belonged to had them - lots of them! Love the nutty taste. Haven't tried growing them myself yet - the wildlife (deer, groundhogs, rabbits) tend to eat most of what I grow.

Many early American settlers came to the Ozarks and they were grateful for th...

Sassafras roots were used to make tea, flavor beverages and candy, and for me... 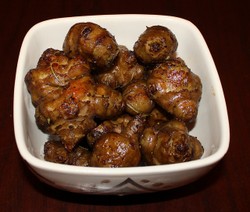 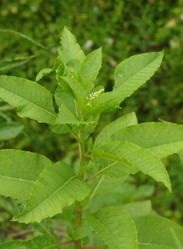 Many early American settlers came to the Ozarks and they were grateful for the early green leaves of pokeweed.
49%  6   4 AngelaJohnson
Trees 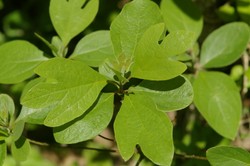 Sassafras roots were used to make tea, flavor beverages and candy, and for medicinal purposes. The leaves are used to make gumbo filé powder.
Loading ...
Error!