DouglasFairbanks: He Comes Up Smiling

The man who defined the big screen swashbuckler was also one of the best comedians of his era.

Most actors don't have two distinct successful film careers. They find their niche in one and for the most part milk it for all it's worth. That's not to say they won't try to evolve or to attempt something they are not generally known for. If possible an actor should never settle. The inner artist must always strive for new avenues to express him/herself.

That's hard to do in film a lot of times because once you become a top star audiences on many occasions are a bit reluctant to see the actor in a totally different light.

One of the the first mega-superstars of Hollywood was able to breakthrough and achieve that success. Before he came to define the movie swashbuckler, Douglas Fairbanks was one of the funniest comedians of an era chock full of superior comedians.

Working on Getting His Picture In The Papers. It Worked

He Comes Up Smiling

This Is All That Survives But You Get The Idea 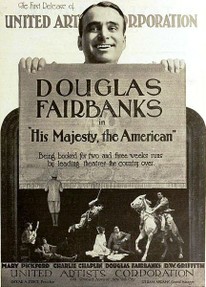 Even before its entry into WWI, America was a country on the move. There was a lot of optimism that regardless of the problem, good old American know how, ingenuity and attitude could easily overcome it.

In cinema, no one represented this spirit of unlimited potential like Douglas Fairbanks.

After twelve years on the stage rising through the ranks to become one of the top comedians of Broadway, Fairbanks was lured to Hollywood by a fat paycheck dangled by executives at Triangle Studios.

His initial reluctance (film was considered as low brow as you could get) gave way when he realized that the possibilities film offered were not attainable on the Great White Way. His charisma, presence and unbelievable athleticism were perfectly tailored for the movies.

While he is now predominately known for defining the costume adventure genre, the public of Fairbanks' time recognized him as one of the best comedians of that era. This was a high compliment considering the competition. One of whom quickly became a close friend of Fairbanks; Charlie Chaplin.

Silent comedy required a whole lot of physicality to get the point across. A good example of this besides people like Chaplin were the Keystone Kops. Created in 1912 by Mack Sennett and featuring players like Ford Sterling and Fatty Arbuckle, they defined the knockabout style of comedy that was very popular back then.

But as good as they were, all of them ran a pale second when it came to the athleticism of 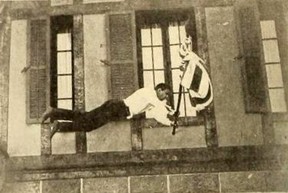 In movies like the Matrimaniac, His Picture In The Papers as well as others during this period, Fairbanks dazzles with his stunts. One of the key differences that separated him from his contemporaries is the physicality had to serve the story. Hurdling between buildings didn't interest Fairbanks if there was no point to it.

And when there was a point then look out. Audiences were in awe of not only the difficulty of the stunt but also the grace that went to it as well. Fairbanks made it all look so effortless.

But it wasn't all about the physical. There had to be that certain something there to attract the movie going public. Many good comedians did excellent stunt work but could barely raise a yawn.

To put it over regardless of the genre a performer had to have "it" and Fairbanks had it in spades. His trademark smile and personality jumped off the screen. With those characteristics came decades of training honing his craft. People like D.W. Griffith didn't think much of his acting abilities but the public disagreed or just didn't care. Fairbanks was the everyman. The perfect representation of young America on the go.

But all you have to do is watch Fairbanks in a movie like the MollyCoddle which shows just how funny he was. Upon meeting some a Hopi Indian tribe, Fairbanks takes part in their dance ritual. He is hysterical and you can see many of the Native Americans doing their best not to laugh.

Yes his comedies were predictable. You knew Fairbanks was going to win in the end and get the girl but his films before and immediately after WWI and more importantly the man struck a chord that catapulted him to the upper echelon of movie stars.

Still the Gold Standard. No Husband & Wife Have Had Such A Profound and Far Reaching Impact On The Movies

The Mystery of Leaping Fish

Fairbanks Is A Riot. The Lifestyle of His Character Is Not Recommended By This Establishment

Hanging Out With A Buddy

Hi Daryl, welcome to Wizzley! These are some fun clips, and the article is nice too, but why not use Douglas Fairbank's name in the title or the short intro underneath? 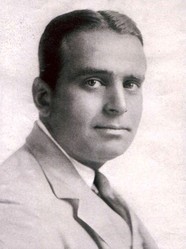 Diaries and divorce impact characters played by David Niven and Shirley Temple in the 1949 film version of "A Kiss for Corliss."
82%  8   8 DerdriuMarriner
Comedy