Hiking the Appalachian Trail was an amazing experience that everyone should try to do at least once in their lifetime.

This past summer a group of seven incoming college freshmen, including myself, had the privilege of hiking on the Appalachian Trail for one week with two student guides and an adult guide. Together we traveled 40 miles of the 2,178 mile trail.

According to the National Park Service website, the Appalachian Trail extends through fourteen states on the United States’ eastern coast.,enjoyed by an estimated four million people. We didn’t see anywhere near that many people in the week we were on the trail, but we did meet some interesting people that helped make our complete isolation from civilization bearable. Hiking the Appalachian Trail was an amazing experience because of what we learned and the things we were able to see.

Books to Get You Prepared for Your Hike

Maintaining the Applachian Trail is a Big Job

My friends and I learned as the days progressed that the Appalachian Trail was created solely by people’s continuous use of it over the years.  In order to maintain the trail, the Appalachian Trail Conservancy, an organization formed in 1925, maintains the trail through local organizations that support not just a recreational route, but also shelter camps and food and farming communities to support the camps.    I think that is amazing; to be able to maintain such a long trail constantly with no federal or state help.  That takes a lot of dedication and hard work.

A Good Backpack and Sleeping Bag is a Must

You Also Need Good Hiking Boots and Lots of Socks

In November 1927, the Potomac Appalachian Trail Club was founded to construct and supervise segments of the Appalachian Trail.  Some of the land the trail was constructed on would later become Shenandoah National Park.

According to the National Park Service website, “The Potomac Appalachian Trail Club supported the establishment of Shenandoah National Park, seeing the eastern national park as a means for the preservation of a large block of rustic, if not wilderness, land.”

This decision caused a rift to form with the Appalachian Trail Conservancy, with whom they had been working to create the trail.  From 1933 to 1942, the Appalachian Trail we have today was made, and the PATC provided the trail cabins I slept in several times during the expedition week.  The PATC partnered with the National Park Service to maintain the route.

There is not a lot of room for changes of clothing

Depending on the time of year, you can get quite a bit of rain

Images from Our Weeklong Trip

People everywhere come to the Appalachian Trail for a challenge.  Whether their goal is just a short hike, a day hike, or a long backpacking trip doesn’t matter.

I remember very vividly when my group stopped at the two fire towers that were on our route.  One was at the Wayah shelter and the other was at the Wesser shelter.  Our group had an amazing view from them both.

I was glad when I reached the Wesser fire tower.  The hike up there was so exhausting.  It was worth it though; the view from the trail was just as good as it was from the fire tower.  The Appalachian Trail itself is also very beautiful.  There were almost always trees on either side of us when we walked.  I loved it because they provided shade when it got hot and it kept me from remembering that we were on a mountain.  When there was a patch in the trees we were able to see the expanse of the mountain all the way to the horizon.

High Energy Food Like Trail Mix is Burned Up Quickly

Don't Forget Extra Batteries for Cameras, Lights, and Other Stuff

Map of the Appalachian Trail

The Triple Crown of Hiking 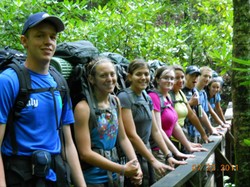 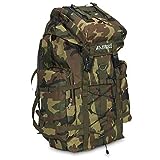