Hobo With A Shotgun - Movie Review

Movie review of the recent cult classic Hobo With A Shotgun a Grindhouse picture which has that 70's edge.

Hobo With A Shotgun is a violent and gritty movie that excels at the Grindhouse scene reminiscent of the 70's movies of the time. Read the review.

Movie Review - Hobo With A Shotgun

Film Review Of Hobo With A Shot Gun

Hobo With A Shotgun Movie Review

Hobo With A Shotgun is a violent movie which is a throw back to the 70's Grindhouse movies of the same era that excelled with over the top violence and dialogue that was simply outrageous and hilarious. Starring Rutger Hauer as the Hobo who arrives in Town were violence is really high on the streets and a Crime lord has a grip on the city with corrupt Police and all that jazz. The Hobo is the star of the show as we see him arrive and he has high hopes for just buying a Lawnmower so he can start his own business mowing lawns, but No, he buys a shotgun one day as he just snaps and starts cleaning up the streets of all the filth.

The thing with these Grindhouse pictures is that not always do the good guys win smoothly as they always get beat up or stabbed. Such is the way of these types of movies as the violence and the tension is amped up you seem to come to the realisation that our hero is stacked against impossible odds. Rutger Hauer is a great actor who over the year has been in some great films and also some terrible movies and on the face of it you'd think this was a right stinker from the concept alone, but no, the title of the movie is a dead give away that everyone involved had as much fun as possible to try and bring this movie to us film fanatics and plus the films title just smells of cult classic!

There is memorable dialogue in the movie and one line that had me howling with laughter was when some bad guy lunges toward the Hobo and says something like "You'll be finger banging Whores in hell!! and I gotta tell you there are more classic movie quotes from that movie, Although I'll have to watch this movie again to memorize them.

The over the top violence is just absurd but brilliant as it helps to depict the situation as a really bad Town with crime just about everywhere which gives the Hobo more to do besides pushing a trolley around. It takes a while for the Hobo to start shooting his shotgun as he just tries to get by the best he can although you can see he is disgusted by everything he sees, then when he snaps it's like a montage of killing all the people he had a run in with in the movies set up.

Towards the end of the movie we are introduced to the Plague which are some armoured thugs who talk like Demons and they go about executing half of the Hospital staff for no real reason, but it's cool and it all adds to the violent world that this movie is set in.

So if you like mindless violence, a plot that is as basic as they come and over the top acting and dialogue that makes you cry with laughter then this movie gem is for you. An instant cult classic!

Hobo With A Shotgun DVD

Hobo With A Shotgun - A Classic 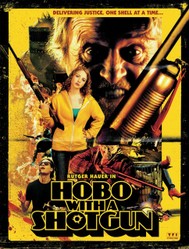