How to keep snakes away

After migrating to Queensland Australia 13 years ago and living most of those years on acreage backing on to bushland, I have become rather desensitized to snakes and seen the advantages of having them around, especially with regards to keeping the local rodent population down. Though after being blessed with children in the house, I have become more aware of the need to safeguard them against these slithering reptiles. Naturally young children and puppies for that matter do not possess the knowledge of how to behave or more specifically how not to be behave around snakes. For instance, when visiting a nearby animal sanctuary, my 4 year old son ran up to pat a python. Even though the snake was in a snake handler’s hands, I did not appreciate the way my son wanted to pat the head rather than just touch the snake at a safe distance from the biting area.

I decided to investigate different methods of reducing the chance of snakes venturing into the backyard where the children and our dog enjoyed frequenting.

To understand what brings the snakes to your backyard, it is important to look at what attracts them there in the first place. If you remove the attraction, you are likely to limit the intrusion of snakes.

Snakes seem to enjoy slithering through grass where they can be relatively hidden, so keeping the grass short at all times is one of the most important steps to take to make your backyard less attractive for snakes.

Most types of snakes seek out places to hide, as they enjoy a predatory lifestyle. Clean up your yard and remove objects that snakes can hide under. If your garden or backyard has a rock wall, see if you can fill the gaps between the rocks with cement, as these gaps are known to be frequented by snakes.

On hot summer days, the snakes will seek out water, so if you have a pond or other water feature in your backyard, the snakes are more likely to venture over for a drink. On more than one occasion we discovered a snake curling around our dog’s water bowl.

But most of all, snakes are attracted to food. We used to keep horse food in our garage which attracted mice and rats, which in turn attracted the snakes. Now we keep all the chicken and horse feed locked up in sealable containers that the rodents cannot get into.

Snakes can also be quite sensitive and sensible reptiles, and value their lives too much to take unnecessary risks. Let us have a look at some of the things I have found from research and own experience that snakes do not like.

Snakes cannot hear, but they detect vibration through the ground. When they notice significant vibration in the ground such as vibration from a human walking, they are highly likely to turn around and leave. Though if followed, they will often adjust to defensive mode, ready to strike. Some companies offer snake repellents that send out a vibrating pulse into the ground, which is said to have good effects on most snakes.

Although I have heard of several instances of dogs being bitten by snakes, especially puppies, our dog (a Dalmatian) is amazing with snakes. She normally doesn’t bark, though when she sees a snake, she will bark like mad scaring the snake to a standstill. I have also seen other farm dogs that round up snakes and attack them.

Cats are natural predators that will hunt and kill a lot of local wildlife, and I have encountered several tough cats that have brought a prize kill of a snake back home with them. As cats also kill other local animals, leading to several local councils in Australia enforcing cat owners to keep them within their properties’ boundaries.

Some people claim that naphthalene in moth balls keep snakes away. But results from a study made by the University of Nebraska shows that it did not have significant deterring effect on snakes. Furthermore, naphthalene is poisonous to humans and other animals, and should not be used in nature.

I came across a blog post about a couple in Adelaide who built a snake proof fence using 6.5 mm square mesh. The fence was made to keep their dogs safe from poisonous snakes. When building a snake proof fence it is important to keep the mesh on the outside of the posts so that the snakes do not have anything to climb on. Also make certain that you do not leave any trees or other structures the snakes can climb hanging over the fence. To ensure the snakes do not slither under the gate, the Adelaide couple laid some concrete down and attached a metal flap from the gate down to concrete.

Liquid Fence, a U.S. company claims that their natural liquid snake repellent works like a charm. According to their website, the scent of the spray irritates and confuses the snake, forcing it to look elsewhere to live. The negatives is that it emits a foul odour that you have to get used to, in addition to having to reapply the spray around your boundary regularly.

I have a lot of snakes on my property. I keep my grass cut short, and the livestock feed in sealed containers. It doesn't keep all of the snakes away, but they are few and far between.

Black snakes are very common in Virginia. There are three kinds of black sna... 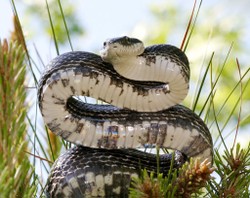 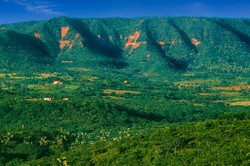