How to Make Bubble and Squeak

Bubble and Squeak got its name from the sound it makes while cooking, it's an interesting way to use leftovers too.

I had never heard of Bubble and Squeak until I was watching television one evening and someone on the show mentioned having it for dinner. I don't remember what show it was but it could have been an episode of Frasier...not sure. Anyway, I liked the name so I did a bit of research and learned it's a British dish made mostly from leftovers from Sunday dinner. I like the idea of using leftovers, it means anything goes. Bubble and Squeak can be entirely vegetarian or you can add meat, it's easily customized to personal taste or to whatever leftovers are in the fridge. It's a hearty, stick to your ribs kind of dish, and the best part is it's made in only one frying pan. Below is my version of Bubble and Squeak.

Side Dish or Main Course

I made this Bubble and Squeak as a vegetable side dish to be served with a main course. (just a little bacon for flavor). You can add meat, chicken or fish to make a nice main course. The key word is 'leftovers', use what you have.

I liked this dish so much, I intend to experiment with a variety of ingredients. 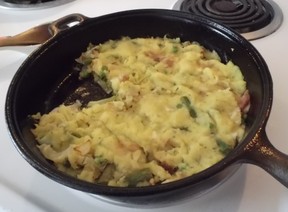 Cut the bacon into 1 inch pieces. If you freeze raw bacon it's easy to cut. Put into a 10 or 12 inch skillet over medium/low heat.

Dice the onion and mince garlic. Add to bacon in skillet.

Add cooked asparagus and sliced raw cabbage. Stir to combine and separate cabbage. Cook for about 6 minutes or until cabbage wilts. Stirring often.

Add frozen peas and stir some more. Cook for another 2 or 3 minutes.

Spread mashed potatoes over the top and gently press down with a spatula. Continue cooking, still on medium to low heat, for about 2 or 3 minutes more. Mashed potatoes will set all the other ingredients.
Cut into wedges directly from the pan or slide the Bubble and Squeak onto a serving dish then slice into wedges.

Bubble and Squeak does hold up to its name during cooking. It bubbles and squeaks!

As you can see from the pictures, I used a cast iron skillet and served directly from it.

Cast iron is my favorite choice for making Bubble and Squeak but if that's not for you, a nice non-stick pan might be just right.

candy47, Thank you for the cooking-by-numbers introduction to bubble and squeak. It'll be interesting to see how much it bubbles and squeaks like what appears to be an equivalent of colcannon -- a dish from my Celtic familial lines -- when I finish making this tonight!

Using one skillet for every step makes clean-up easy. You'll love it Mira!

I love the cabbage and potato combo. I'll try doing this in a skillet, too. :D

I love my soup making machine. No vegetable gardener should be without one.

I've never heard of a soup making machine, I had to look it up.

I make a point of re-using leftovers. Sometimes I simply eat them, but at others I put them in the soup making machine along with allotment vegetables and spices.

Same here Angela, I never waste food. This was new to me and I love it. The possibilities are endless.

I've heard of Bubble and Squeak but never have made it. My leftovers never go to waste - I always think of some way to use them.

Thank you Veronica. I don't let any food go to waste and this is a perfect recipe for leftovers.

The most versatile cookware you can buy. Cast iron cookware can withstand hig...

Roast a chicken or turkey in half the usual time by spatchcocking before roas...

Quinoa (pronounced "keen-wah") is seed that has become a popular side dish or... 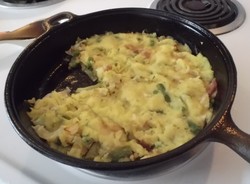 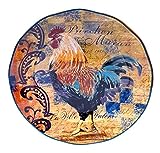 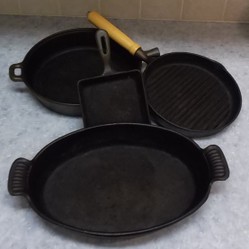 The most versatile cookware you can buy. Cast iron cookware can withstand high heat on top of the stove or in the oven. Properly seasoned it will last forever.
52%  6   5 candy47
BBQ & Grilling 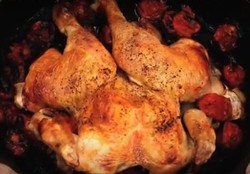 Roast a chicken or turkey in half the usual time by spatchcocking before roasting.
100%  12   12 happynutritionist
Side Dish Recipes

Quinoa (pronounced "keen-wah") is seed that has become a popular side dish or part of recipes. The protein to carbohydrate ratio is higher in Quinoa than Rice.
Loading ...
Error!