How to Separate Eggs

What does it means when a recipe says, "Separate the yolks from the whites"? More importantly, how do you do it without a mess?

This time of year, many of us whip out the classic holiday recipes and tackle cooking and baking exploits we wouldn't take the time for at other times of year. Often when faced with the instructions, "Separate the whites from the yolks," I have felt perplexed. Should I really take the time to do that? Is it worth the bother? And inevitably, how is it done?

If you are like me on this, don't despair, and don't do as I've sometimes done and just ignore the advice. There really is a reason a recipe tells you to separate the whites from the yolks. And I'm going to let you in on a secret or two on how to do it.

Do You Separate Your Whites from Your Yolks?

When You Are Baking

Yes I do separate for meringue and also I add an extra egg white to English Yorkshire pudding.

If required, yes I do.

Why Bother Separating the Whites from the Yolks?

When a recipe calls for the separation of the whites and the yolks, it is usually to make the best of the qualities of each of the egg's components. When you beat the yolks with sugar, etc., you can make a rich, creamy mixture that adds a distinctive quality to baked goods and sauces.

Whipping the whites incorporates a great deal of air and lightness to the batter. This allows the cake to rise better and other desserts to have a lighter feel. When the eggs are kept whole, the cake may still rise, but it will lose that airy quality that you can only get when you whip the whites on their own and then incorporate it into the batter with the yolks.

Of course, those who have difficulty with cholesterol will find a need to separate the whites from the yolks for a different reason. They may eliminate the yolks from the recipe altogether in order to retain the light quality that eggs give a recipe, but without the cholesterol the yolks contain.

How do you usually separate eggs? My only experience previously of separating eggs went like this: I cracked an egg, holding the yolk carefully in half the shell, letting the white drip into the bowl and keeping the yolk in the half shell. Then comes the part when I'd transfer the yolk back and forth between the two halves until all the white was in the bowl. At this point, I'd drop the yolks into a second bowl and toss the shells into the compost.

Easy enough, but the process was often less than effective, as bits of yolk sometimes dripped into the whites. Although not a catastrophe, this accidental mixture can interfere with the whites' ability to be whipped up properly.

I hadn't thought all of this was such a big deal until I found the video that has changed how I approach separating my eggs now.

Some Options for Separating Eggs

This Is My Favorite Method for Separating Eggs!

And Reuse a Plastic Bottle, Too

The first time I saw this done, I scratched my head and said, "Now why didn't I think of that?" It's such a simple, effective method, and it uses no fancy gadgets that you need to buy. Separating your whites from your yolks, whether you are trying a new recipe or trying to cut down on chloresterol, has never been easier. After you watch it, you'll know what I mean!

The Recycle-Friendly Method for Separating Eggs

You've Got to See This!

Thanks for Reading This Egg Separating Wizzle

I Hope You've Enjoyed It

And I hope you've learned some new tricks in the process. Please leave a message below. I look forward to reading your thoughts on separating eggs.

OMG I love this info, I hate separating eggs. Thank you so much for sharing this information!

Thanks for your comment, Thamisgith. And thanks for the heads-up on the first video. You used to be able to watch it embedded, so they must have changed their rules. I'm going to delete it here, but if anyone wants to see how eggs are separated by the food industry, you can watch the video on Youtube: http://youtu.be/0MszLow2uEI

Good info. My wife just has a "white" omelette, so quite topical for me.

Your first video is barred from embedding btw. The second one is more relevant for me anyway. I doubt if I'll ever need to separate hundreds of yolks, unless my better half is really hungry, but the trick with the water bottle is way cool.

Sometimes simple is the best.

I was using halves of eggs for many years and had the same problem. After I got a separator this process became really easy. Never hear for the trick with the bottle before. It is simple idea and it works like a bomb!

Mira, it is amazing, isn't it? And yet I feel it makes so much sense.

What a fun way to separate yolks, indeed! :) I kept watching that bottle and marveling at it. Thank you for sharing!

I hope they enjoy it!

That's great 2uesday! I like the bottle method because it's kind of funny, but the Yolky gadget takes up less room.

Make some crafts with your kids with empty clear plastic bottles.

Love chocolate cake, but on a gluten-free diet? These flourless cake recipes ...

Salads taste much better when the leaves are dry and the dressing can sit dir... 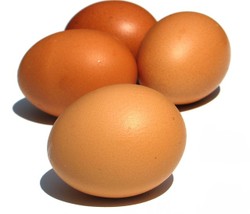 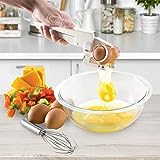 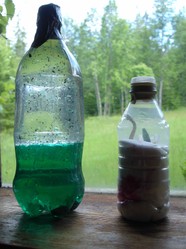 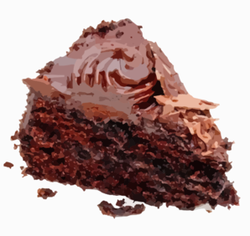 Love chocolate cake, but on a gluten-free diet? These flourless cake recipes use quinoa and black beans instead of wheat, making them an ideal dessert for celiac families.
63%  1   9 Rose
Hand Held Kitchen Gadgets 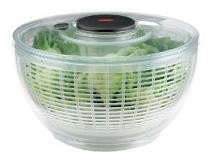 Salads taste much better when the leaves are dry and the dressing can sit directly on the leaf. We review the best salad spinners available
Loading ...
Error!