Jones, whose full name is Dr. Henry Walton "Indiana" Jones, Jr. was unforgettably played by Harrison Ford in the four feature films. The movies were a homage to film serials and pulp magazines of the 1930’s, which unapologetically celebrated their strong-jawed heroes. The character and series was created by George Lucas and each of the feature films was directed by Steven Spielberg. As if Ford, Lucas and Spielberg were not already, the Indy Jones films forever cemented the positions as Hollywood heavyweights.

Indiana Jones has gone on to become one of, if not the, most acclaimed characters of modern cinema, ranking prominently on the greatest characters or heroes list of many prestigious magazines and websites. For example, Time magazine named him second on their ‘Greatest Fictional Character of All Time’, behind only Sherlock Holmes. He was also second on The American Film Institute’s 2003 list of ‘100 Years...100 Heroes and Villains’, this time behind To Kill a Mocking Bird’s Atticus Finch on the hero list. Famous British movie magazine Empire consider him the sixth Greatest Movie Character ever. He has also been listed prominently by other industry magazines like Premiere, Entertainment Weekly and more.

The character of Indiana Jones has been the subject of a television series, video games, novels,  and even theme park rides. However, it is his feature films, particularly the first and third, which are widely considered to be considered cinema classics. Combined, the four films have grossed nearly US$2 billion dollars.

The first three movies are set in the 1930’s, with the latest installment, Indiana Jones and the Kingdom of the Crystal Skull taking place in 1957. This was 19 years after the last both in filming and in Indy time.

Here is the list of full length feature films featuring Harrison Ford as Indiana Jones, all of which are on the ‘Adventures’ Blu-ray set.

Indiana Jones: The Complete Adventures Blu-ray box set includes the newly restored Raiders of the Lost Ark that was recently released on IMAX. The second two films have also been remastered for the collection. This is the first time all four films have been released in a collection in high definition.

The set includes seven hours of special features, an hour of it being never released before footage. This includes the new two part documentary, “On Set with Raiders of the Lost Ark – From Jungle to Desert and From Adventure to Legend”.

This Indy box set is on five discs, one for each of the movies and an additional disc for special features. The movie discs also have the teaser trailer and theatrical trailer for the films, or in the case of Crystal Skull, the three theatrical trailers.

Subtitles are available with English, French, Portuguese and Spanish. It is standard aspect ratio of 2.40:1. The set is rated: PG-13 (Parental Guidance Suggested), the rating which the first Indiana Jones movie famously helped launch. The set will be released on September 18, 2012.

It took nearly twenty years of trying until Lucas, Spielberg and Ford finally produced the latest film, Indiana Jones and the Kingdom of the Crystal Skull. While another film in the series is being discussed, it could be years before it hits the screen. Indeed, considering Ford’s advancing years, he is over 70 years old, we may have seen the last of the India Jones movies.

It is safe to say that Indiana Jones: The Complete Adventures will be the definitive collection for quite some time.

What was your favorite Indiana Jones movie?

Man, I still have to watch the two last parts of the saga. But somehow I couldn't brace up myself for it...

Mel Gibson returns to type in 2012's Get the Gringo, a gritty action movie wh... 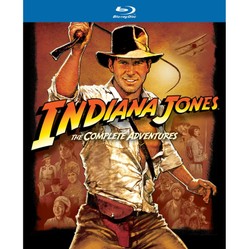 Mel Gibson returns to type in 2012's Get the Gringo, a gritty action movie where the main character shoots firsts and asks questions later. Check out the DVD and movie review.
35%  2   4 Mike_W
Entertainment & Media

The 2011 Green Hornet movie introduced a new generation to the masked super hero. The Green Hornet has been entertaining audiences for nine decades through radio, TV and comics.
30%  1   4 Mike_W
Action and Adventure Movies