Is tanning really healthy? Understanding both sides of what has become an ongoing debate can help you decide.

Many people feel that having a deep, dark tan makes them appear more youthful, vital, and healthy looking.  They willingly spend hours in the summer sun at the beach, poolside or in backyards to achieve the perfect tan.  Others take time for regular visits to indoor tanning salons in the same quest for a more attractive appearance.

The tanning process, whether affected by exposure of the skin to natural sunlight or the fluorescent lamps of a tanning bed, requires significant exposure to UV (ultraviolet) radiation.  We receive mixed messages with regards to whether sunbathing and indoor tanning is good for us.

Some organizations, like the Indoor Tanning Association, extol the healthful benefits of controlled exposure to UV (ultraviolet) radiation.  Health professionals disagree, pointing to the mounting evidence obtained through medical research that the link between prolonged UV radiation exposure and the development of skin cancer is undeniable.

What is the truth?  Is tanning really healthy or unhealthy for us?  A look at both sides of the debate can help us make an informed decision about whether tanning is beneficial or risky behavior when it comes to good health.

The Indoor Tanning Association (ITA) is a trade group that represents manufactures of indoor tanning equipment, indoor tanning equipment and supplies distributors, and tanning salon owners.  The association maintains unequivocally that receiving moderate exposure to the sun or ultraviolet light is a healthy practice, stating; "There is a growing body of well-conducted, validated scientific research demonstrating that the production of the activated form of vitamin D is one of the most effective ways the body controls abnormal cell growth. Moderate exposure to sunlight is the only way for the body to manufacture the vitamin D necessary for producing activated vitamin D."1

ITA dismisses claims by the medical community that exposure to UV radiation is associated with the development of melanoma, the most dangerous form of skin cancer.  According to the association, "No well-designed studies support the connection between melanoma and UV exposure from tanning beds."2

The position of the ITA is that indoor tanning involves only moderate UV radiation exposure and is a responsible way that people can maximize the potential healthful benefits of tanning while minimizing any potential risks of UV exposure.  Sunburn avoidance is primary to the association's definition of "moderate" exposure.3

Tanning Definitely Not Healthy According to Medical Community

For those convinced by the pro-tanning argument that in moderation, tanning is both beneficial and safe, world health professionals say not so fast.  According to Cancer Research UK, a research and awareness charity says, "International health organizations agree that sun exposure is the main cause of skin cancers."  The organization also claims that "over eight in ten malignant melanomas are linked to excessive exposure to sunlight and use of sunbeds."4

Another health organization, the Skin Cancer Foundation, says that whether acquired from natural sunlight or tanning lamps, tans represent skin cell damage from exposure to harmful levels of UV radiation.  The foundation warns, "Indoor ultraviolet (UV) tanners are 74 percent more likely to develop melanoma than those who have never tanned indoors."  Skin cancer isn't the only unhealthy aspect of tanning they add.  Cumulative damage caused by UV radiation can lead to premature skin aging (such as) wrinkles, lax skin, and brown spots."5

The Centers for Disease Control (CDC) disagrees with indoor tanning industry claims that indoor tanning is safer than outdoor tanning.  "Indoor tanning and tanning outside are both dangerous. Although tanning beds operate on a timer, the exposure to ultraviolet (UV) rays can vary based on the age and type of light bulbs...a tan indicates damage to your skin."  It is the opinion of the CDC that a positive link exists between indoor tanning and "skin cancers including melanoma, squamous cell carcinoma, and cancers of the eye."6

Discerning the Real Truth about Tanning

After considering the claims by both sides of the tanning safety debate, some of us might be just as confused as ever.  Some of the claims by the tanning industry are certainly true.  For example, it is an accepted fact that UV radiation stimulates the natural production of Vitamin D by the body and Vitamin D is a necessary part of good health.

There are also other documented benefits of exposure to natural sunlight.  In the words of James Spencer, associate clinical professor of dermatology at Mt. Sinai School of Medicine in New York; "Being out in the sun boosts our mood, improves sleep, and promotes vitamin D production."7  Clearly it seems there are real benefits to UV radiation exposure.

On the other hand, the voluminous amount of evidence produced by medical research that supports the link between sunbathing and skin cancer can't be seriously dismissed.  Does it really just come down to deciding which side of the debate you choose to believe?

Actually there is a way to get at the truth and make a decision about whether tanning is healthy or unhealthy.  When examining two opposing views it is always a good idea to consider the credibility factor.

In the debate over tanning, the two opposing camps are readily identifiable.  The loudest pro-tanning voice is a trade group that represents members of an industry that had an estimated $5 billion of revenues in 2011.8  Without implying that the indoor tanning industry is intentionally misleading us and encouraging people to risk their health in the interest of turning a profit, it is rather hard not to recall how the tobacco industry did that very thing for years.

On the other hand, with regard to the most visible anti-tanning group, the medical community, it is quite difficult to imagine any motivation for telling people that tanning puts our health in risk if it weren't true.  For example, there seems no way that doctors, hospitals, or medical researchers would stand to profit financially from fabricating a link between tanning and skin cancer.  In fact those employed in treating cancer would likely lose money by actively educating people to avoid contracting a disease that they could get paid to treat.  That seems one good reason to assume that the health community likely has our best interests at heart and why that side of the argument should be accorded greater credibility.

There is another consideration that can also help to clarify the issue.  A level of UV radiation far below that necessary to accomplish tanning triggers the same natural production of Vitamin D in the body and produces the beneficial positive mood effects.  In other words, it isn't necessary to get a tan to experience the beneficial effects available from UV radiation.

Some minimal degree of exposure to UV radiation does promote good health but the benefits can likely be achieved through exposure to natural sunlight in normal everyday activities.  To err on the safe side, it is a good idea to take the sun safety measures that medical professionals advise, especially the use of an effective sunscreen.  The prolonged exposure to UV radiation necessary to achieve a tan is likely a significant risk to good health.

Each person must assess the risks and rewards of tanning and then make their own personal decision.  Just as some people today continue to smoke in face of the accepted medical evidence that smoking causes cancer and other serious health conditions, some people will choose in the name of vanity to continue sunbathing.

1"FAQs: Is moderate exposure to the sun or ultraviolet (UV) light good for your health?" Indoor Tanning Association.com.  Web.  07 Jan. 2012.

What Do You Think? Tanning - Safe or Unsafe?

Thanks so much for sharing your related personal experience Angel. Yes, getting some sun really does make me feel better too. But as you mentioned we should all take the precaution of using sunscreen.

Enjoyed your article. I only used tanning beds in my younger years and ended up with melanoma at age 20. I still go out in the sun but have to be careful and use sunscreen. It makes me feel so much better to get a little sun. Melanoma is a scary thing. But easy to prevent. Good information. 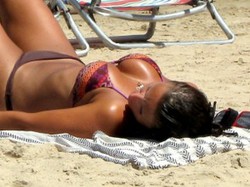