At first Jack did not understand why he had such a hard time in school, but with help, understanding, and patience Jack's disability turned into an asset.

Jack's mother, Miriam, was born in Virginia. His father, John, was a Navy man originally born in Montana. When his parents met and married they moved to Shelby Montana. At the time Shelby was known as a wild place with gaming and distractions of the flesh. Miriam's parents, steadfast southerners, were disturbed by this move. When John and Miriam moved there, housing was at a premium. As the area grew John started a gravel business, but due to lack of housing the family lived in a tent next to the gravel beds.

Jack Grows up in the Right Environment

To control rodents John, Jack's father, kept a bull-snake in the family tent. Jack was around reptiles from a very early age.

Jack's mother, though very much the fifties housewife, loved to travel. She and her husband John made a point of traveling all over Montana. Of course Jack was always on these trips.

When Jack was eight he discovered a dinosaur bone on one of the trips.

Grade School
All through grade school Jack struggled with reading, mathematics, and writing. Jack was deathly afraid of speaking in front of an audience. He was so afraid that he refused to read in front of class even under threat of a failing grade.

Over time he was branded as lazy. He eventually graduated from high-school with near failing grades. One of his teachers told him he should have failed, but that he'd been passed because the teaching staff didn't want to see him back in school.

"I managed to graduate high school, but just barely, having received Ds in all required classes, including English, in which my grade was a D minus, minus, minus. The teacher told me that this was essentially an F, but that he never wanted to see me again." - Jack Horner

Jack did excel in two areas, physical education and science. Jack won numerous awards for his science projects. One year he made a rocket fueled with zinc and sulfur which flew to a few thousand feet. Another year he built and demonstrated a Van de Graff generator and a Tesla coil.

His final year he created an exhibit comparing Montana dinosaur bones to those found in Alberta Canada. One of his judges, a geology professor at Montana State University, invited Jack to attend MSU on a geology scholarship.

Because all that was required to enter the university was a high school diploma, Jack attended  majoring in geology.

Eventually he flunked out and was drafted into the Marine Corps.

By the end of 1966 Jack was on his way to Vietnam. He spent fourteen months there as a Marine Recon Scout. Jack says the experience was good for him because he gained maturity and a world perspective. Of course while there he witnessed atrocities as well. Jack thinks he may have a mild form of Post Traumatic Stress Syndrome.

To keep himself sane he would polish a mirror for a telescope back on base between forays into the jungle.

When he returned home in 1968 Jack attempted to learn astrophysics at Caltech. When that didn't work out he headed back to the University of Montana to resume his studies in geology. His grades were so bad Jack was given a "pink slip" by the dean of students five times. Jack's adviser, James Peterson, interceding with the dean, wrote letters of support for Jack all five times and Jack was allowed to continue his studies.

In 1973 Jack left college without a degree. Jack's father, John, was ready to retire from the gravel business he'd built. John sold the business to his son Jim, and he and Jack would operate the heavy equipment. Jack did this for a year and a half.

All this time Jack dreamed of working in his chosen field. In his youth he'd found dinosaur bones all throughout Shelby. He'd even presented some to a school there. He had a knack for finding them and does to this day.

Jack began a letter writing campaign looking for any job in his chosen field. He said in his letters that he would take any job from technician to director.

He eventually heard back from Princeton University with a position as technician. He also got a response for a job as head technician at the Los Angeles County Museum and another from the Royal Ontario Museum in Toronto. 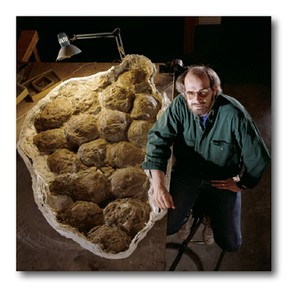 He interviewed for each position and was offered a job at all three locations. Jack decided to base his choice on location, not pay. He did not like the idea of working in large population centers and settled on the technician job at Princeton.

Jack worked with Dr. Donald Baird for seven years at Princeton. At the time dinosaur paleontology was an underfunded science. Jack and Dr. Baird comprised the entire department.

One day while walking across campus Jack encountered a letter sized poster. The ad asked simple questions such as "do you have difficulty reading?" and "would you rather make a phone call than write a letter?" A test was offered to students only, but Jack talked his way into the exam. This was very fortunate. It helped Jack make an important discovery; a discovery about the learning difficulties he's had all his life.

Dyslexia
After taking the test it was determined that Jack had some form of dyslexia. Of course, the results didn't define just how severe his dyslexia was nor did it help Jack improve his reading, but at least Jack had a reasonable explanation for why study was so difficult for him.

As it has been said many times 'information is power' and this revelation helped Jack get the aid he needed to work with his disability.

From Failing Student to Renowned Paleontologist

If you haven't figured it out by now "Jack" is John R. Horner.

In 1979 Jack and a team of students discovered evidence that dinosaurs cared for their young. They found nests with fossilized "chicks", not in solitary settings, but in groups; a dinosaur nursery. The baby dinosaurs had femurs (the longest leg bone) that were too small to support their weight, but teeth that were clearly worn from eating. The only conclusion was that their parent dinosaurs fed them.

In 1980 Jack's team also discovered a clutch of fossilized dinosaur eggs. The eggs were found carefully arranged in a nest. This further supported his theory of careful parenting by dinosaurs.

In 1982 Jack was recruited by the University of Montana. He never did earn a degree in paleontology, but he was awarded an honorary Doctorate of Science in 1986 from that school. That same year he was awarded a MacArthur Fellowship; "the genius grant."

Papers
Jack has written many papers. He discovered that editors were happy to fix his errors and publish his work as long as the underlying science was sound. His first published works appeared in The Journal of Paleontology and Nature. Two very prestigious publications for sciences.

"Writing is still very difficult for me, and I would always rather a more fluent co-author did the actual writing. I know what I can do and what I can't do, and for the things I can't do, I try to find someone to help. I think that's really important, and certainly something I stress to people like myself. We must be able to admit that we need help where we do need it." - Dr. Jack Horner

Jack Horner has published over one hundred scientific papers. He and his teams have established that dinosaurs were very different than reptiles and very different than most people assumed. Together Jack and his students continue to change the perception of dinosaurs. With their discoveries dinosaurs are now seen as a group of animals unique in the world.

Jack established the theory that modern birds are the descendents of dinosaurs. He even calls birds "avian dinosaurs." Dr. Horner and his team determined that dinosaurs cared for their young, grew rapidly and changed drastically from birth to maturity. Though he has caused a fair amount of uproar in the scientific community by cutting open dinosaur eggs and sawing into dinosaur bone, his efforts have resulted in incredible new knowledge. Many previously individually named dinosaurs are now known to be the young of established lines. His efforts, and those of his students, have yielded blood vessels, protein, and even the knowledge that one sixteen year old T-Rex was pregnant when she died.

All of these discoveries were the direct result of hunting for DNA in sixty-five million year old dinosaur bones. Jack and his teams have yet to find DNA, but the effort to find it have resulted in many new discoveries and groundbreaking theories regarding dinosaurs.

Doctor Horner continues to teach at the University of Montana. His current project is "chickenosaurus." With help from geneticists he hopes to create a living, breathing dinosaur from a chicken.

"And I think they [my parents] might be especially pleased at my having inspired some young people with learning differences by showing them what can be achieved by someone with a learning difference if one is persistent, cherishes the high expectations that measure success, and has the proper support and encouragement." - Jack Horner

How Jack's Dyslexia Actually Helped Him

Over time it has been determined that the reason dyslexics have a hard time reading or writing is because they see letters differently than the most of us do.

This is how a dyslexic interprets these symbols. This may be horrible if you are attempting to read, but it is wonderful if you are looking for bones. To a dyslexic, you know the shape of a bone, it does not matter how it is oriented in the ground. You'll be able to recognize before anyone else.

Dr. Horner is living proof that a learning disability does not have to quash your dreams or dis-rail a career if you are both persistent and willing to ask for a little help.

Granted a lot of this this is due to Jack's discovery of his learning problem. But it should be noted that he never really gave up. Despite being shunned by teachers and given passing grades just to get him out of the school system, Jack continued to follow his dreams. 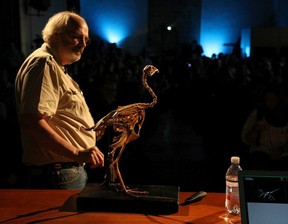 He is still not wholly independent, but who is?

Early on Jack discovered that editors of scientific journals did not have a problem editing his work as long as his findings were valid and interesting.

Today, Jack is not ashamed to ask for help when he needs it and he is now so well known and respected that there is an entire cadre of people anxious to lend any hand needed.

With his "disability" Jack continues to astound the world of paleontology with new discoveries, new paradigms regarding dinosaurs, and the idea that we may be able to bring them back to the world in a limited way. 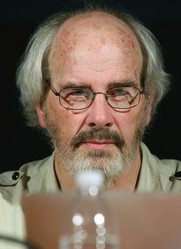 How to Build a Dinosaur: The New Science of Reverse Evolution
100%  56   25 dustytoes
Nature