Understanding a little about jade colors and jade origin and deep traditional past gives you a greater appreciation for the true beauty of Jade.

Jade colors history and symbol. Because jade is more than a classic gemstone that is timeless and has never wavered in beauty, elegance or popularity throughout the ages. It also holds a very symbolic history that transcends ancient China. When we think of Jade we envision a vibrant emerald green color that transforms jewelry and sculptures into works of art.

It is an important property in feng shui and healing as it represents strength and serenity. Jade is a prominent color in the fashion industry and an unceasing inspiration to designers of ornamental jewelry,
clothing and beauty products. In actuality, there
are many different jade colors and two true
types of Jade stone, Jadeite and Nephrite.

The Many Jade Colors

Imperial Green - This is the rarest type of Jadeite with a rich emerald green hue due to the traces of chromium it contains. It is a medium green color, vibrant in intensity, opaque or semi-transparent, and even in color. An absolutely stunning color against black.

Lavender - This is the second most valued hue in Jadeite next to imperial green and an unusual color in the Jade line. A much rarer color than the more common Jade varieties of greens and whites, it holds more value when it is highly saturated and even in color. It goes beautifully with silver and looks amazing against a background of white, blue or red.

White - White Jade was a common Nephrite color in the ancient Chinese culture. It is extremely rare to find white Jadeite. White Jade has little to no impurities and is as lovely as diamonds. White Jade goes well with silver or gold and gives beads and bangle bracelets a look of purity and sophistication. It is beautiful with virtually any color.

Black - Black Jade gets its color from the high amount of iron and graphite and is found in both Nephrite and Jadeite. It is very popular among modern Jade collectors and is a classic color. It looks striking with silver and goes well against any color.

Green - The traditional and most common color of Jade in both Nephrite and Jadeite which gets its color from the presence of chromium. All shades of green are available from light green to dark green and it can vary in clarity from an opaque, milky color to extremely translucent. Green jade looks most vibrant against a background of black.

Red - Red Jade contains large amounts of iron oxide and is associated with passion, vitality and strength. It is also called the chi stone and is many times mistaken for fire Jade but they are not one in the same. Red Jade is a brilliant and vivacious color that can provide a fun look as well as a look of simple elegance.

Jade has a long and rich history and continues to be a highly sought after gemstone in today's marketplace. The use of Jade is most common today in jewelry like beads, bangle bracelets, earrings and amulets. Jade has traditionally been put together with gold and pearls; however, the modern consumer wears Jade with sophistication and style utilizing the wide variety of colors available in the most creative and fun fashions. Buying high quality Jade jewelry can be considered an investment since demand for Jade has continued to rise but availability has decreased.

The Categories Of Jade Colors

There are 3 categories and prices are based on these

These three categories are used internationally by people in all areas of the Jade business to place a value on Jade jewelry. Trustworthy and reputable dealers will typically offer a certificate or guarantee for Type A Jade.

Type A: Untreated Jade with the color being 100% natural and referred to as "true color". Natural Jade contains no processing with the exception of a bath and being waxed with beeswax. Type A Jade holds the most value.

Type B: Jade injected with polymer and treated with chemicals like sulfuric acid to improve transparency and remove imperfections so the stone will look clearer. It is still considered real Jade with 100% natural color.

Type C: Jade that is treated with the same chemicals as Type B but is also dyed to enhance the color.

There are four primary characteristics to look at to determine whether or not a piece of jewelry is made with good quality Jade. Beware of the impostors who try to pass themselves off as real Jade like serpentine (also called New Jade or Olive Jade), New Zealand Greenstone (Pounamu), prehnite, dyed translucent quartz, and chrysoprase (Australian Jade) to name a few.

- Color: There are a wide variety of colors available in Jade and the color should always be highly saturated and even. It should not appear splotchy.
- Texture: Texture can appear very fine or very coarse. Both Jadeite and Nephrite have a high density and will sound like glass clinking together if you tap two pieces of real Jade together. If one of the pieces is fake it will have a dull sound when one piece is tapped against the other.
- Translucency: Translucency can be clear or milky. Jadeite appears very translucent when held against the light.
- Cut: The cut of a Jade gemstone should be smooth.

Jade is an extremely hard gemstone with Nephrite being slightly softer than Jadeite. A diamond is the hardest natural mineral found on the planet and is rated as a 10 in hardness on the Mohs Scale. Jadeite is rated as a 6.5 to 7 on the Mohs Scale with Nephrite slightly behind at 6 to 6.5. Jadeite is so hard that it will scratch glass and even metal. A scratch test is often used to determine if Jade is real or not. Nephrite, however, can be damaged by a scratch test because it is a softer material than Jadeite.

A Little More About Jade

Nephrite and Jadeite are the only two true Jade stones. Even though they are both very similar in appearance they are two very distinct stones with different composition and structure. Nephrite is the older of the two and dates back to ancient civilizations. Nephrite is also the most common form of Jade and can be detected by its low luster and low translucency. It is also typically the more affordable of these two Jade stones. Nephrite consists of magnesium and calcium and is typically found in shades of mid to dark green and white although there are other varying colors available. Ancient and traditional Chinese Jade is made from Nephrite.

Jadeite was introduced from Burma in the late 1800's and has become the more sought after of the two as it is much rarer, more valuable and is considered a precious gemstone. Jadeite is a silicate mineral with sodium and aluminum and also contains traces of chromium and pyroxene. Jadeite can be found in a wide variety of colors which includes green, lavender, pink, black, yellow, and white. The rarest type of Jadeite is called Imperial Jade and is the most valuable. Imperial Jade contains traces of chromium which gives it its rich emerald green color.

Nephrite deposits can be found in locations such as China, New Zealand, Russia, Guatemala, Canada and the US. Jadeite deposits are found in Burma and can also be found in other countries like Russia, Japan, Canada and the US. Jade is typically mined in large quantities with large blocks sold as is to buyers in Asia. Buyers bidding on a stone do not usually have the opportunity to see the quality of the Jade until after the sale. There is usually a risk involved as to whether or not the buyer is getting a high quality stone.

What Are Your Favorite Jade Colors?

Whew - what a comprehensive article on jade! I love the emerald jade especially in the jewelry. I couldn't help noticing that the jade sculpture of dragon looks so impressive.

I never knew that there was a lavender jade. Very pretty, although I think I still favor the more traditional green tones.

It's beginning to sound like there's an echo in here, but I'm adding my voice too: I didn't know there were so many jade colours! I thought there was only green!

The light green is so beautiful, love the dragon... Thanks for shearing.

Didn't know about all these jade colors. Interesting and informative article.

I knew jade is found in colors other than green, but didn't know there were so many! It is a lovely stone.

The Chinese tend to like green jade. You can also find many Buddha and Goddess Of Mercy jade pendants which supposedly can help ward off evil spirits.

Tanzanite Gemstones | Tanzanite Jewelry | Tanzanite
Disclosure: This page generates income for authors based on affiliate relationships with our partners, including Amazon, Google and others. 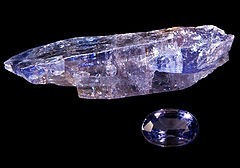