The Landmarks of Britain coin series is a short, easily collected coin series of beautiful coins.

In 2017 the Royal Mint issued the first coin of the Landmarks of Britain coin series. As a person whose ancestors include people of Britain, I am keenly interested in learning about Britain, and coins offer an excellent look at places of interest.

The Royal Mint continued with two coins in 2018, and one in 2019. Seeing but one in 2019 I kept checking the Royal Mint bullion site for a second release. It never came. So, I searched for information, and a respected coin seller makes the claim the series is finished.

The First Coin of the Landmarks of Britain Coin Series

Big Ben is one of the most recognizable landmarks of London, England.  The clock is easily recognized as a British treasure.  Having Big Ben start the series was an acceptable selection.

The Second Coin of The Landmarks of Britain Coin Series

The Third Coin of The Landmarks of Britain Coin Series

Trafalgar Square is located in London, England.  The square commemorates the naval battle of Trafalgar.  The large column is what makes the square recognizable.  Nelson’s column which features a statue of Nelson guarded by four lions is a significant part of the square, albeit not an original part.  The column was added later.

The Fourth Coin of The Landmarks of Britain Coin Series

Buckingham Palace is the residence of the monarch, currently Queen Elizabeth II.  It is an awe-inspiring building located in London, England.

Was a Longer Series Planned?

The Royal Mint is apt to pay attention to detail.  The series is titled The Landmarks of Britain, not The Landmarks of London, nor even The Landmarks of England.  Britain is much more expansive, and has many landmarks, than one might believe based on the four landmarks selected.  It seems that either the series was abruptly truncated, or Scotland, Wales, and Northern Ireland were deliberately ignored.  Indeed, much of England was ignored as well, and only London focused upon.

I was eager to see more of the entirety of Britain.  But, with the series now complete it will not be via this coin series.

Why Have I Never Seen One of These Coins?

This question might well be asked by anyone in Britain, unless the person is a coin collector.  This series is of bullion coins.  Each coin in the series contains one-ounce fine silver, and they are available at the Royal Mint.  These coins have a nominal denomination of two pounds, and since the silver content is worth much more than the denomination the coins are not designed to be spent.

A Series Worth Collecting

Even though the series failed to meet my hopes of a greater scope, the coins are beautiful, and they are minted with the high quality of the Royal Mint.  Since the series is short, and silver is affordable by many, this series is quite collectible.

The introduction image is of our own,

This is like believing history is just events and dates, but a proper study of history requires understanding of the causes and effects of those events.

When Thatcher was prime minister some of her more ignorant members of parliament tried to have social and economic history banned from schools on the grounds that "history is about kings and battles". Their motive was to cover up injustices,many of which were wrought by the social class that they represent. Fortunately, the proposal failed.But it shows the potential for political bias in history.

I should add some, not all, historians actually try to get it right.

I believe much of history is taught with a bias according to the place the teaching occurs. Taking the insights of a history book is much like saying something is so because it is on the web, there need be fact checking before acceptance. I can watch history being made by our politicians, and both sides claim the same facts mean quite different things, so in twenty years history books will be biased by the political bent of the author. I have read enough comments to ascertain it is also so in Britain.

The point about the unhealthy dominance of London is well-made. While the Great Fire of London is significant, why do our school history books skim over the Highland Clearances,which were an ongoing injustice wrought by the ruling class against the northern Scots? The clearances are significant, though revealing about the power structure in our country, which is why they are downplayed.

It was English and Scottish landowners who were guilty of these clearances, not just the English. But many Britons have not heard of this injustice, and the gang of extreme right wing plutocrats who currently misrule the UK would rather conceal the economic injustices that have permeated our national social and economic history.

Thanks, the point I tried to make is why the narrow focus? I believe it was intentional, although I did offer another plausible reason, a truncation of the series before its intended ending. If Britain means England, and England means London seems to be the mindset of those who control things.

Typically the subjects of these coins are very "London-centric. "
Londoners and those who work there have little concept or interest of anything outside the SE
( Indeed when my sister in law came North for my wedding in 1979, she had never been . more North than North London before. )
Of all the lovely landmarks across Britain I wouldn't have chosen these. There are plenty better ones.

( An aside …. British school children have to learn about the Great Fire of London as a topic of national importance. Why ? it had no importance to anyone outside London . )

I missed the article to which you refer.

Yes, these are significant landmarks, but to be fair I would have been more inclusive, such as the Castle at Edinburgh. I am certain such places as the white Cliffs of Dover could have made the list. Or, change the name to Landmarks of London. My preference, considering the quality of the coins, would be to extend the series.

blackspanielgallery, Thank you for the practical information and the product line.
Those are the landmarks -- along with the London Eye -- that show up consistently in films and series -- such as Elementary's Holmes traveling between NYC and London -- that are set, or bring, in London.
Did you see the year-end articles by the English participants in the August 2019 expedition that identified an angelim vermelho as the Amazon's tallest tree? It was described as taller than Nelson's column!

Thanks for the update. 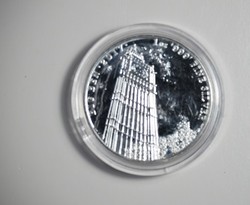 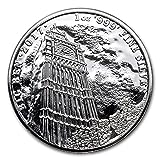 The State of Alaska has an interesting art contest annually. The winning design is placed on the Official Alaska State Medallion, which is highly collectible.
71%  16   4 blackspanielgallery
Coin Collecting