This wonderful park offers huge opportunities for photographers, bird watchers, and wildlife lovers to explore nature. It is located about 8 miles north of the Okefenokee Swamp.

This park is well known by camping enthusiasts. The campground is often at near capacity as nature lovers set up camp and enjoy the fishing and wildlife viewing. The endangered Gopher Tortoise makes it's home here in the park as well as white tailed deer, rabbits, endangered Indigo snakes and lots of interesting birds. Bass of 3-5 pound size are often caught in the lake as well as lots of different types of perch.

First state park in Georgia named after a woman

I have a special interest in all things related to the Okefenokee Swamp. As the oldest son of a man who lived his early childhood years up to age thirteen along its edges, I had grown up hearing stories of bears on the front porch and snakes in the house. I had also often heard a story involving a pack of wild dogs and Ole Pet (the family's mule). There was also a story of a hollow log containing a mother skunk and her young. And at other times, I was entertained by a story or two involving a dog eating alligator and a fire tower climbing bear.

As a youth I was frequently out on the edges of the swamp deer hunting with my dad. And sometimes, just "out for a drive" seeing what could be seen along the seemingly endless miles of dirt roads maintained by the forest department or the owners of the local planted pine forests. This web of access roads divided the bordering planted pine woods into "blocks" and allowed up close access to the borders of the Okefenokee Wildlife Refuge. Stories of panthers, bobcats, large deer, snakes, and bears were common.

But as wonderful as this region bordering the north side of the great swamp is, it allows nowhere for folks to camp. Fortunately, in the 1930's the U.S. government purchased land from area farmers about nine miles east of the town of Waycross, Georgia, and built the park which would eventually be known as Laura S. Walker State Park. This was the first park in Georgia to be named for a woman, Mrs. Laura S. Walker, an environmentalist who was clearly ahead of her time.

This park has numerous camping sites for travel campers and tents and even a couple of "pioneer" camping areas removed from the main camping areas. In these areas one is often able to fall asleep enjoying the sounds of hooting owls, the fussing of competing opossums, and the deep-throated roaring challenges of bull alligators in the nearby lake. Early in the morning you may peek out of your tent to see deer, raccoons, and other small wild animals. The bird watching is excellent there in the park and many avid bird watchers put the park and the nearby Okefenokee Swamp high on their list of winter and spring locations for great bird watching.

The park boasts good hiking trials for family oriented hikes as well as the serious bird watcher. Anglers will enjoy challenging the largemouth bass which are often caught in the lake; reports of 4-5 pound bass are not unusual. The nearby Dixon Memorial State Forest which separates the park and the nearby Okefenokee Swamp is a good location for serious deer and bear hunters. But never fear, the hunting areas are well away from the park's trails, golf course, and lake. If you are one who plans to visit the Deep South during the cooler months of late winter or early spring, a 2-3 day camping stop here at Laura S. Walker State Park and a visit to the nearby Okefenokee Swamp Park will provide many positive memories.

blackspanielgallery, I have often driven through your area. My wife and I enjoy the scenery there every time. We did some bird watching there at a park near Mandeville, but I can't remember the name of it. I think it started with a 'P'?

I have often heard of the swamp. Of course, we have our own, and they are plentiful in south Louisiana.

This is a very relaxing and interesting little walk through a wooded area. It... 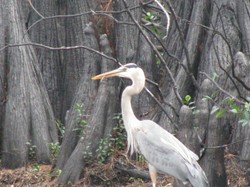 The Okefenokee Swamp is home to hundreds of bird and plant species and wild animals. It is a great get-a-way location for camping, birding, wildlife photography, and relaxing.
33%  4   3 swampnut
Georgia 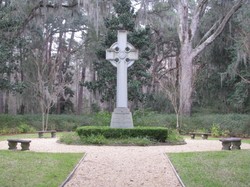 This is a very relaxing and interesting little walk through a wooded area. It ends in a prayer garden dominated by a 15 ton cross which stands in the center of the garden.
Loading ...
Error!