This is a neat Lego racing set that includes two race cars and four mini figures. With 292 pieces total, it's a set that makes for a great gift!

For the cheapest price that I could find online, click on the picture of the Lego race set on the right.  With Amazon, you'll also receive free shipping on the set, which is always a plus!  There's a tremendous selection of Lego racing products over there.

This new Lego racing set is sure to be a hit with kids this Christmas season.  The set includes two race cars, a red and a green one.  Each car comes with its own set of weapons, which are used to attack the competing car.  For the red car, a set of spikes can be used to try to disable to the green team.  The green car counters with missiles as their weapon of choice.

Along with the two cars comes four mini figures, two red members and two green members.  The red team, named the Backyard Blasters, the two mini figurines are Bart the Blaster and Billy Bob Blaster.  For the green team (X-treme Daredevils), the figurines are Max-treme and Rex-treme.

When assembled, the two cars measure six inches each.  The great thing about this set is that putting together the cars is only the first step of fun.  After building the cars, there's loads of fun to be had battling amongst the two teams.

In addition to the cars and mini figures, the set also comes with a start finish line, a trophy for the winning team, and a winner's platform.

It's a great Lego set for extended fun after the original build.  This is a bonus over many of the lego sets that are forgotten about once they are put together.  This is something to consider when deciding on the perfect gift to give a kid.  Don't settle for a present that will last an hour or two and then never be touched again.  If you like the Lego racing line, there are many other products to be had as well.  Cars are always fun, but boats, motocycles, and trucks make good racing vehicles as well.

The set is intended for ages 7 to 14, but I'd mainly consider this a product for the lower ages of that range.  For older kids, building the set is the main objective and this set loses it's play over time with that age group.  The younger kids will be more likely to continue playing with the set after it is put togther.  Just something to consider! 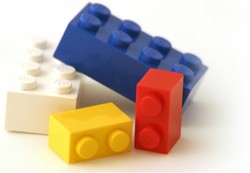