Leonardo da Vinci was one of the greatest minds and artistic talents in mankind's history. He embodied the ideals of the quintessential "Renaissance Man" perfectly, a genius whose mind was always racing after some new idea, invention, or artistic creation. We remain fascinated by his works, and visitors flock constantly to view his notebooks, drawings, and paintings wherever they may be on exhibit. An exhibit of his paintings at London's National Gallery several years ago sold out in record time, and visitors are left waiting hours hoping for the chance to score one of 500 daily tickets remaining for sale at the door.

Do you know someone who is a fan of Leonardo da Vinci and his works? Are you interested in learning more about Leonardo yourself? Then this guide is here to help you. I've collected links to many wonderful Leonardo da Vinci products, from art posters and prints to scholarly books and DVDs. You'll also find fun items such as dolls, action figures, games inspired by Leonardo and building kits. So why not explore the world of Leonardo and perhaps find that perfect gift for the Renaissance Man or Woman in your life?

A brief introduction to the early days of the Renaissance Man

Leonardo was born April 15, 1452 in the town of Vinci, Italy, near Florence. He was the illegitimate son of the wealthy Messer Piero Fruosino di Antonio da Vinci and a peasant named Caterina. As such, he had no true surname, and the "da Vinci" applied to his name today simply means "Leonardo, (son) of (Mes)ser Piero from Vinci".

Little is known of his early life except that he received an informal education in Latin, geometry and mathematics. In 1466, when he was fourteen, Leonardo became an apprentice to the artist Andrea di Cione, known as Verrocchio. Verrocchio's workshop was one of the finest in Florence at the time and it would have been there that Leonardo learned much about painting technique, drawing and other artistic skills. Legend has it that one of the earliest paintings clearly from Leonardo's hand is the angel to the far left in Verrocchio's "The Baptism of Christ". There is such a striking difference in technique and skill in that beautiful angel's face that, supposedly, Verrocchio "never painted again" after seeing what his apprentice could accomplish.

But Leonardo was far more than a gifted painter and drawer--in fact he left us with very few actually completed paintings that can be attributed to him with certainty. Art was often secondary to his fevered interest in learning more about the world around him, human and animal anatomy, civil engineering and mechanical technology. He dreamed up many great machines and tools, many of which were impractical in his time but predated the later development of more modern technology such as the helicopter, the tank and the parachute. His studies of anatomy in particular are a wonder for a time when dissection of a human corpse was very much taboo, but his drawings today are a marvel to study and would have made a tremendous contribution to medical science if they had been published in his lifetime.

Learn more about Leonardo's life and work at Wikipedia.

Scholarly titles by some of the world's foremost Leonardo experts

There are countless books written on Leonardo da Vinci, trying to decipher his painting techniques, his life, his codices and drawings. What follows are just a few of the best titles written or edited by Martin Kemp, one of the world's leading historians and scholars of Leonardo.

As per Amazon: "This masterly account of Leonardo da Vinci and his vision of the world has long been recognized as the classic treatment of the Renaissance giant, offering unparalleled insight into Leonardo's intellect and vision at every stage of his artistic career."

This book is a "good biography" and an "insightful analysis" of Leonardo, scholarly while also a fine introduction for those who are just beginning to study da Vinci. Author Sir Kenneth Clark was a premiere art historian of his time, and his work here is supplemented in this edition with an introduction and revision help by Martin Kemp.

This book by Kemp concentrates on Leonardo's "visual thinking" and how he approached both modeling in his art and while visualizing his fantastical creations. This is a wonderful book for anyone fascinated by Leonardo's drawings and how he devised great machines with just a piece of paper as his "laboratory".

Here, Leonardo's own words and writings are compiled into a beautiful volume, including his so-called Treatise on Painting and other surviving manuscripts.

This book (once again by Martin Kemp) takes the reader "on an absorbing journey through the life and work of Leonardo..." examining "the ideas underlying Leonardo's investigations of nature, illuminating his vision of the artist-engineer as matching nature itself in his creativity."

Bid now for rare and out of print titles

eBay is a great source for Leonardo da Vinci books, including rare titles that may be out of print or otherwise difficult to come by. Here are just a few current listings.

Posters and prints of famous da Vinci works of art, or illustrations from his writings, are great ideas for gift items, too. Matted and framed they can look extremely elegant - and are probably as close as any of us can come to having a work by da Vinci in our own homes or offices!

Forget Spider Man, Batman or Wolverine - Leonardo was a REAL superhero! This Renaissance Man might not have had superpowers, but his curiosity and intelligence drove him to improve mankind's understanding of the world around us. So what could be better than adding a Leonardo da Vinci action figure to your collection of heroes?

Leonardo is fully posable and comes with a standing easel, a frame, and four paintings you can switch in and out of the frame to display. This is a fun gift item for Leonardo fans young and old.

Fun casualwear for men and women

T-shirts with da Vinci artwork and illustrations are great for any fan or lover of the artist's work. There are many designs available from simple to full-wrap designs that will really make a statement. Here are just a few examples to show what you can find:

Know someone who loves Leonardo and likes to play board, card and puzzle games? Then here are some products worth checking out.

This book features a challenging combination of puzzles, trivia quizzes, drawings and more, all related to Leonardo da Vinci. Have fun while learning more about this great Renaissance Man at the same time!

This award-winning game is great for those who love puzzles and strategies. Place tiles on the board to create patterns - and the more complex your pattern, the better you score! For two players or two teams.

This card game can be played separately or as an add-on to the DaVinci Challenge Game listed above. Players describe it as "addicting" and "Similar to UNO but with using Flower of Life symbols."

This is a challenging adventure game for the PC, which should appeal to both fans of puzzle games and role-playing action-adventure games. Take on the role of Valdo, a disgraced apprentice of Francesco Melzi and former disciple of the late Leonardo Da Vinci. Your job is to investigate a mystery involving one of Leonardo's lost codices.

Compete against Leonardo himself in this exciting board game, for 2-5 players of age 12 and up. Create unique machines and inventions for your city and try to become THE greatest Renaissance Man of your time!

You can build a da Vinci masterpiece in your own living room with one of these challenging jigsaw puzzles.

Leonardo's inventions and machines are almost as famous as his artistic works. Here, you can build miniature replicas of the famous war machines and devices found in Leonardo's drawings. These are fun learning tools for older children, as well as cool collectibles for adult enthusiasts of da Vinci.

Part of "The Little Thinkers" Series

A cute and fun, soft doll that's great for da Vinci fans young and old. Approximately 12" tall, Leonardo is dressed "authentically" for his time and comes with an information label.

Websites and Articles Dedicated to Leonardo

Leonardo da Vinci’s “The Last Supper” is one of the most recognizable works of religious art in the world. Da Vinci’s interpretation of the subject of Christ and the Apostles has enraptured viewers and art historians for centuries… 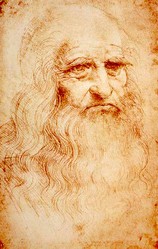