Dali's work was prophetic. Scientists still struggle to explain the concepts of time that the talented artist valiantly portrayed.

What was Salvador Dali trying to achieve in the surrealist painting "The Persistence of Memory"? The concepts about time he attempted to capture still perplex scientists to this day. The illusionary nature of time was a theme that Dali explored over a 15year period. Like other painters of this era, Dali tried to come to terms with post war society by painting in a cathartic manner. The dreamlike atmosphere of the bent and twisted objets d'art are loaded with poignant symbolism.

The Relationship Between Memory and Time

One of the most important Surrealist paintings, The Persistence of Memory has been in the collection of the Museum of Modern Art (MoMA) in New York City since 1934. The painting by Salvador Dali depicts time as a melted, morphed pocket watch. This illusion captures Dalí's theory of "softness" and "hardness", which grapples with the ineffable illusory slipperiness of our human perception of time. It also alludes to the tenuous grasp we all have on the way we deal with time. Dawn Ades wrote, "The soft watches are an unconscious symbol of the relativity of space and time, a Surrealist meditation on the collapse of our notions of a fixed cosmic order".

The Persistence of Memory was a prophetic painting. Even now, we as human beings have a hard time understanding the elastic nature of time. Scientists have certainly been trying to explain inconsistencies characteristic of time. Authors such as George Smoot, Stephen Hawking and Michio Kaku do a good job of explaining this difficult
phenomenon, but it is still a hard concept for most people to comprehend.

Memory and The Persistence of Time

The First Painting to Deal With a Perplexing Topc

Were Surrealists Joking or Were They Deadly Serious?

Horror in the Aftermath of War

Dalí told Ilya Prigogine that the soft watches were actually a representation of a “Camembert cheese melting in the sun”.  But this seems to have been a joke of some kind. (Many of the Surrealist paintings were sardonic jokes of some kind) The prolific artist then proceeded to turn the attention of his work to exploring time in a systematic way.

Dalí is reported to have gone through a Freudian phase, but this later transitioned to a scientific phase, which stretched for fourteen years. It is thought that Dali’s thinking was influenced by the atomic bombings of Hiroshima and Nagasaki in 1945.

Dalí’s paintings often manifested as self-portraits and his symbolism was often repeated. In the case of The Persistence of Memory, Dali painted ants to symbolize decay.  We can only imagine that this would have been the perceived decay of society that other artists such as Abstract Expressionists also reacted to.

There is quite a lot of imagery in the painting that pertains to dreamlike states and dreaming. The truth is that we are not exactly sure what the different parts of the painting symbolize.   We can take a guess that the clocks, as well as the name of the painting indicate that the imagery is about the different way(s) that times passes.  It is difficult for human beings to grasp whether time is a construct of their own imagination or whether time exists whether or not people are there to count, quantify and measure its passing. And the way memory is processed as a cascade of kaleidoscopic formings when people are dreaming.

Scientists are Catching up with Artist's Premonitions

Dali an Artist Well Ahead of His Time

Dali had the capacity to painting in a very realistic manner, but he employed these realistic techniques to juxtapose elements in unlikely ways. The unusualness of the compositions had an impact of creating dreamlike atmospheres.   The paintings beg the question “What Is Time?’ Even to this day scientists have a difficult time explaining the answers to this question in a satisfactory way. The book Wrinkles in Time suggest that time itself can change and morph in nature. An interesting aspect of the painting is that time is represented as taking place in a backdrop or within a landscape. In this case, the “landscape” is a mentalist environment for dreams to take place within.

It is said that the rocks of the landscape portray the tip of Cap de Creus peninsula in north-eastern Catalonia.

It is interesting to note that Dalí often painted around the theme of time and the persistence (and distortion?) of memory. By linking time with dreaming, Dali has been able to capture the disorderly functions of time, and the way dreams can combine aspects of “reality” in manners that are not linear.  He has predicted modern theories that posit time can shrink and stretch.

Some of his other works on this topic are

This Book is a Must for People Trying to Understand Time

Time as a Commodity

Added after discussion with other writers

I have added this little idea to this article after discussing the notion of time with other writers.   A while back, I wrote an article on Suite101 called Time as a Commodity   The articles talks about multi-media art and the way modern society has fallen into the trap of splicing and dicing time. This process started with the clock. Minutes, hours, days ....years...ages ... and then once divided up into packages time itself was something that could be bought and sold. (Think of slaves) 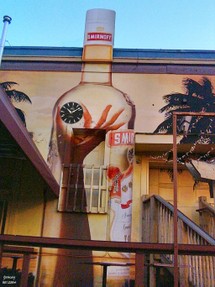 Zygmunt Bauman has dveloped the idea of Liquid Modernity over a period of time. It is a simple idea. In a global world human beings are not as grounded in stable society as they once were.(Bauman 2000)

Last night I was writing a FRASB and found a picture of a huge bottle and so I reworked it to represent Time in a Bottle.  Time as a thing that we can buy and sell.

Pour me another glass of time would you?

Variations on the Theme of Time

Time as a Commodity

Paul Signac the Rational, Warm Hearted Sailor
Paul Signac had a propensity to systematize everything within his arts based practice. That is why he was the ideal artist to be at the forefront of the Pointillist movement.

What Made Sir Sydney Nolan So Popular?
Nolan's Australian landscapes captured the untidiness of the outback and arid desert wilderness. He superimposed 'portraits' of rogues, bushrangers and castaway personalities.
Updated: 10/28/2013, Jo_Murphy
Thank you! Would you like to post a comment now?
7

Hi Dave, Sorry that I didn't acknowledge this - it mustn't have alerted me.
Art seems to be a two way street. Communication between artists and audience. Jo

Yes He is intriguing! Thanks for stopping in,
Jo

Danish for mother's mother. It's also what they call Cloris Leachman in Raising Hope, I find that show amusingly earthy, and recommend it to all and sundry.

You pan your writing? No! Just write.
mor mor? I will have a look.
The people where I grew up are Badtjala (I am from irish descent)
I will go and read your article now, Jo

My maternal grandmother, mor mor, took us to Phillip Island in Victoria some decades ago now, to see the Fairy Penguins coming home to their burrows in the dusk. Like commuters in suits getting off the night train. They must have rolled their eyes at all the people watching them.

Well, I wrote about gravity...not quite sure why I write the way I do, but I'm going to ignore it, and keep on writing...

I'll write an article about Fairy Penguins they are fun.
I saw them once when young and have never forgotten them.
I wondered what that thing was? Now I know it was an award.
I have just found out how to make mugs. What a hoot!
Thank you so much for bringing me here.
Jo

Wow! Congrats on the Editor's Choice Award already! Go you! *jumping up and down as a cheerleader* That's quite a staggering achievement.

And I love that you and Fargy are hanging out here. Fairy penguins? The mind boggles.

Not quite clear on what you mean? I thought I saw some mugs on your article - must have been another one.
You don't have to make the product.
I only made that for fun,
Jo

I love it! I've no idea what Zazzle is. I'm having fun with finally expressing my ideas in my random style on Wizzley. Not sure an art site would improve by my presence.

Wrinkles in Time: Witness to the Birth of the Universe
100%  9   6 KathleenDuffy
Famous Painters

Suzanne Valadon was a Fench circus performer, artist's model, waitress and single mother who overcame her class background and her gender to become a respected artist.
100%  17   12 Mira
Famous Painters