Edit Piaf's birth name was Édith Giovanna Gassion and she was born in Belleville, Paris in 1915. Edith first began her singing career busking in the street.

Is it the truth that Édith Giovanna Gassion was named after a World War I British nurse executed for helping French soldiers escape in the Second World War? We don't really know. These were troubled times and Edith later became entangled with the French Resistance and needed to defend her behavior. There seems to be a mixture of myth, fiction and fact surrounding the life of Edith Piaf.

Piaf was a stage name given to the troubled performer when she began performing 20 years later. Piaf was a french slang word for "sparrow". The name captured a sense of the singers frailty and nervousness. The truth about what made Édith Piaf's life so hard is unclear.  We do know that she faced many challenges as a young girl. She grew up working on the streets with her father an acrobat performer who started out in theatre. When busking in the street Edith was "discovered".   Her talent was developed and she lived on to International stardom.  Her life was cut short by tragedy.

A life of busking

Édith Piaf was abandoned from birth by her mother. At first she lived with her grandmother.  It seems unfortunate that she was taken by her father to be cared for by his mother who ran a brothel in Normandy. The story of her childhood is quite strange, but it was war time and crazy things do happen during wars. Piaf's biography would have you believe that when she recovered her eyesight after three years of suffering with keratitis, it was because her grandmother's prostitutes pooled money so that she could pilgrimage to Saint Thérèse of Lisieux. There are many other explanations offered for why she may have been healed from the condition.

The young woman began her singing career in 1929 aged 14. She worked with her father as a second act. He offered acrobatic street performances all over France, and she doubled as a singer. Edith began singing in the streets with Simone "Mômone" Berteaut, and by earning a little money they were able to afford to share accommodation.

Tragedy dogged Piaf's life and she became pregnant at an early age. Having lived a neglected and difficult life herself, Piaf found it difficult to care for her child who died at the age of two from meningitis.

From Rags to Riches

From start to finish

A nightclub owner Louis Leplée, discovered Piaf singing in the streets in 1935. He had a club called Le Gerny off the Champs-Élysées. She took some persuading but eventually sang for Leplée.   It was at this night club that wearing a black dress became her trademark.  Later, she would always appear in black. She had her first two records produced that same year.

Leplée was murdered in 1936 and Piaf was accused of being an accessory.  This association and the suspicions surrounding it threatened her career. Piaf wrote the lyrics of many of her songs and collaborated with composers on the tunes. She went on to become France's most popular entertainer. And then once the war was over she was able to further her reach internationally.
"La vie en rose", was written in 1945 and was voted a Grammy Hall of Fame Award in 1998. In April 1963, Piaf recorded her last song, "L'Homme de Berlin".

The Need for Career Management

Because her singing name was threatened Piaf recruited Raymond Asso to rehabilitate her career. He helped her to change her name, and helped her disentangle from undesirable acquaintances.  Now they commissioned Monnot to write songs.  For some reason they chose to write music and lyrics that reflected or alluded to Piaf's former life on the streets.

Édith co-starred in a successful one-act play written for her by Jean Cocteau called Le Bel Indifférent in 1940.

Many people considered Piaf a traitor!  She performed for German troops during the Second World War. After the war was over, she defended herself by claiming she had been working for the French Resistance. Throughout her trials and tribulations she remained a national and international favorite.  Many chose not to judge her based on innuendo and gossip.

Piaf  had an affair with married boxer Marcel Cerdan, and this too ended in tragedy.   He died in a plane crash in October 1949.  He was on his way to meet her in New York City. Her life become ever more troubled.  This trouble escalated after two car crashes in which she was injured.   Piaf continually battled with morphine and alcohol addictions.  She went into rehabilitation on three different occasions but the treatments were not permanently effective.

After drifting in and out of consciousness for several months, Piaf died of liver cancer at age 47 in 1963. Although she was denied a funeral mass within the Roman Catholic church at the time because of her lifestyle, On October 10, 2013, fifty years after her death, the Roman Catholic Church found it in their heart to give her a memorial mass in the St. Jean-Baptiste Church in Belleville. Paris. This was the parish where she was born.

At her original funeral there was huge attendance by a procession of thousands of fans. In Paris, there is a two-room museum dedicated to Piaf's memory called the Musée Édith Piaf.
Hers was a tragic life that seemed to have been dogged by unrest and dis-equanimity, and yet she rests now in peace. She was a lovable and talented singer who won the hearts of an International audience.

She Rests Now in Peace

Paul Signac the Rational, Warm Hearted Sailor
Paul Signac had a propensity to systematize everything within his arts based practice. That is why he was the ideal artist to be at the forefront of the Pointillist movement.
Updated: 10/27/2013, Jo_Murphy
Thank you! Would you like to post a comment now?
7

Hi Paula,
Nice to find you here! I am only settling in. I find the life of Piaf fascinating. Thanks for commenting, Jo

I'd forgotten that Edith was Mme Lamboukas dite Piaf. Thanks for the reminder.

Hi Jo,
It was the movie that first opened my eyes to how such great music came about. Her life is an inspiration especially to anyone who thinks that they are being held back by their background.
Thanks for dropping by,
Jo

Yes, thanks Elias I loved the movie. It seems to have been fairly accurate to the little fact we know about Piaf. She was a very brave woman. Jo

I didn't know anything about the life of Edith Piaf. This has been quite an eye-opener. Thank you. 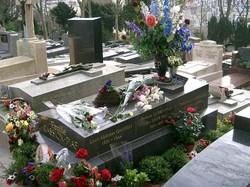