Paul Signac had a propensity to systematize everything within his arts based practice. That is why he was the ideal artist to be at the forefront of the Pointillist movement.

For Signac, artists who are revolutionaries value social justice and artistic harmony. His works were extraordinary compositions of balanced harmony and exquisit interplays of colour. Signac was a sailor and he portrayed the energy of the tides. Through this experimentation, the innovative artist captured the spirit of the changing times. An extremely accomplished draftsman, he was well respected by the avant garde of his day.

Together they loved and painted the sea

Inspired by Turner who shared his love of the sea, Paul Victor Jules Signac captured the spontaneity and the energy of the storm and the pure restful serenity of the calmed tempest. Signac (French: [pɔl siɲak] was born on the 11 November 1863.

Classified as a French neo-impressionist painter, Signac’s early training in architecture meant that he commenced his painting career with a very detailed and finely precise understanding of the structure and mathematics of design.

When he was inspired to make the change from architecture to painting by exposure to Monet his precise mind met the sponteneity of the impressionist movement. All along the coast of Europe Signac sailed about painting seascapes, landscapes and ports of call.

Under Seurat’s influence Signac moved away from the short choppiness of impressionism and turned to a more scientifically planned method of execution.

Balance Harmony and a Rationale Scientific Approach to Artistic Creation

In 1887, Van Gogh and Signac would visit Asnières-sur-Seine

Pointillism is a scientific method of mixing colour optically by juxtaposing tiny coloured spots so that when grouped in a variety of ways, secondary and tertiary colours are created in the minds eye.

Signac was a sailor who travelled about by small boat visiting almost all the ports of France, Holland, and the Mediterranean. The inspired artist sketched rapidly and with highly intuitive spontaneity.  The speed with which he worked meant that his preparational drawings and watercolours were vibrant, colorful energetic and alive. He then painted larger canvases back in his studio.   Here he could slow down, spread out and be mathematically precise. In working this way, he was able to have the best of both worlds. He captured the majesty of the nautical land/seascapes, and then he refined his paintings by developing them through formulaic principles.

The pointillistic process was something akin to creating a mosaic.  The beauty was enhanced because the work could be extremely finely detailed.  Because the paintings were consummated with a fluid medium, the effect was softened and a translucent effect was achieved.  Many of the works have a breathtaking peaceful aura about them.

Signac worked with oils, watercolors, etchings, lithographs, and when working with pen and ink he  laboriously executed pointillist sketches.  Signac inspired Henri Matisse and André Derain and this modeling in turn influenced Fauvism.

Dynamic tension created by an interplay of horizontal and oblique lines

Pure harmony created by the use of a limited palette

Want as Signac was to studying precise mathematical formulae, his colour combinations were also rationally inspired.  Road to Gennevilliers is a simple yet striking analogous colour composition that evokes peaceful feelings in the viewer. The sparseness and restful linear work accentuate the calmness of atmosphere.

Look at the darker blue that throws the yellows of the The Pink Cloud forward.  This use of colours from opposite sides of the colour wheel  enables modeling of the clouds into a sculptural form. There is nothing wishy washy about this painting.   It is solid, energetic and dynamic. And yet, there is a peaceful harmony created by the placement of shapes within the composition. Horizontal lines on the horizon work with the complimentary nature of green and pink to evoke the peaceful, settled feeling of the sun slowly sinking at the end of a nautical day.

Tension is created through contra-position

Look at the tilt on the two main boats that act as subject matter in this painting.  Their directional lines act to counter balance each other.  This counter balanced feeling is offset by the perpendicular lines of the building toward the centre of the painting.  There is a solid horizontal line that 'grounds' the dynamic tension.

The red of the sails brings focus to the composition, while inciting an energetic enthusiasm which permeates the painting.  The greys again act as a counterbalance, while the reflections add a touch of sophistication.

Hi Kathleen, Thanks for the reading - artists had a hard life back then, Jo

Jo, thanks for this informative article. Although I know some of his work I didn't know anything about Signac's life before this.

Sorry for the ate reply. I missed this one.
I really like Signac's work.
I can't imagine having time to paint like that! Jo

I like the For Saint-Jean painting, and your take on Signac. 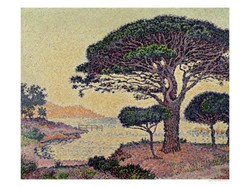