Letters of the alphabet, colorful curves and lines, make a delightful hands-on experience for beginning readers and writers...

Using the translucent pieces from Handwriting Without Tears, children put curves and lines together to form the letters of the alphabet. Take two long lines and put them together at the top. Then use a short straight crossed in the middle to form a capital letter A.

As you play with your children talk about the different letters and the shapes that form those letters.

Play copycat games to see if you can both form the same letters.

Soon your child will know all 26 capitals as well as the 26 small letters of the alphabet.

Exploring with a Light Table

Beginning Readers at the Light Table

When the children were young we had a glass topped coffee table that the kids used as a light table. At first it was used to trace coloring pages that they wished to color again.

One day we discovered what fun it was to experiment with plastic plates that came tinted with translucent pastel hues. By placing a yellow plate over a blue one the plates appeared green.

Then we discovered the many ways we could play using sheets of tinted acetate.

By this time my older two were reading but my youngest was just beginning to learn her letters. At first we cut whole letters out of the acetate but it wasn't long before we discovered how much more versatile it was to just cut out basic shapes and use those to form the letters.

Letters on the Light Table

Learning the Shapes of Letters

At first the letters just appear to be a jumbled pile of indistinguishable shapes. That is the way letters must appear to young children before they have learned to read. It is in learning to distinguish the various shapes that children first begin to read letters and eventually words, sentences and books.

Invite your children over to the light table and offer them a bowl of letters to pour out onto the surface:

As you play with the letters, use their names and mention the sounds they represent. You will be surprised at how quickly your children learn their letters. Playing with them on the light table just makes the whole process more fun.

Build Your Own Light Table

Build a Light Table for the Kids

After you Build a Light Table

Once you turn on your light table you will discover so many fun ways to explore the way light passes through objects.

My youngest loved putting together letters and then arranging those letters to form words.

The one complaint I have read about these letter pieces is that a few of the letters are difficult at best to form from the pieces that come with the set. My solution would be to add onto the set with homemade pieces made of acetate.

Singing a song about frogs for a Morning Meeting activity is a fun, active wa... 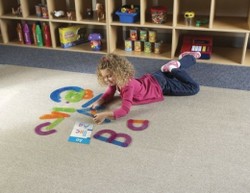 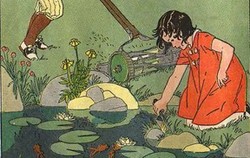 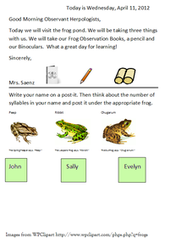 Singing a song about frogs for a Morning Meeting activity is a fun, active way to focus the children on the Frog Theme, learn about syllables and create community.
Loading ...
Error!