Check out Lockout to see Guy Pearce as a CIA agent in 2079 rescuing the president's daughter from prisoners in a space prison. Read the Lockout DVD and Film Review for more.

A framed CIA agent of the future must rescue the president’s daughter from a space prison whose frozen inmates have thawed and taken over. Yes, the description sounds like this movie could be all types of awesome. If you agree, then Lockout is most probably a film for you, even if it doesn’t quite deliver on its promise. For one thing, the description implies the agent is already a prisoner during the prison revolt. Unfortunately this is not the case and he has to sneak on board. Sorry, I can’t tell you why it was considered quicker and better to transport a murderer from Earth rather than actual soldiers to perform the rescue. That plot point may jar with your expectations from the description, so better you accept it now and enjoy the rest of the movie.

Lockout was directed by James Mather and Stephen St. Leger, who both also co-wrote along with Luc Besson, the executive producer. Luc Besson is fashioning an impressive resume of slick, bubblegum action films, and Lockout is a low-maintenance entry into the stable. It’s no Taken (2008) and it’s certainly no Léon: The Professional (1994) or The Fifth Element (1997). However, if you liked Besson’s work in The Transporter movies, Hitman (2007) or if you gave From Paris with Love (2010) a pass, then you’ll probably enjoy Lockout.

You need to watch this

Having recently published my Get the Gringo DVD and Movie Review, Lockout is the perfect follow up. Both have gritty, wise cracking tough guys who find themselves having to escape from a dangerous prison. Which film did it better? Well, Get the Gringo, starring Mel Gibson, was undoubtedly the better movie. However, the Lockout DVD certainly has its place in a lazy Friday or Saturday night-in situation. It’s the perfect movie to squirm in your seat, yell at the bad guy and occasionally laugh at the blatant plot holes.

Movie viewers have all seen Guy Pearce's work some point. He has an extremely varied film portfolio, including a drag queen in The Adventures of Priscilla, Queen of the Desert, a by-the-book LAPD officer in L.A. Confidential, an anterograde amnesiac in Memento, a swinging King Edward in the King’s Speech, and many more. However, you’ve never seen him like this. In Lockout Pearce takes a memorable turn as Snow, a wisecracking and pumped up CIA agent in 2079.

Playing the part of damsel-in-distress/kidnapped president’s daughter, is Maggie Gray, the damsel-in-distress/kidnapped daughter from Taken. Leading the prison revolt is Vincent Regan as the sometimes pragmatic but usually ruthless Alex and Joseph Gilgun as the psychotic Hydell. Peter Stormare plays Scott Langral, the ambiguous Chief of the Secret Service and Lennie James is Harry Shaw, a secret service agent.

Lockout’s cast, particularly Guy Pearce, who carries most of the movie, do a good job of papering over some of the plot holes, but there is only so much they can do. A psychedelic motorbike chase scene that looks straight from a computer game will jar with viewers with higher expectations. However, in general the special effects and action are very good when you consider that this is not a blockbuster movie with a big budget. One thing you will have to appreciate about Lockout is that it is incredibly fast paced. The story moves so fast that it easy to just sit back and enjoy the ride.

When you decide to watch a film like Lockout, a film set in the future where prisoners are cryogenically frozen in space, there are obviously leaps of faith you will be required to make. Lockout doesn’t flinch from asking you to make these leaps, possibly a little too often and a little too far. However, you have a choice: watch something else, or embrace the imperfections and laugh with it.

If you liked Lockout…

Then check out some of Luc Besson’s other films.

As mentioned in the introduction, Besson has developed an impressive stable of action movies. Most of them are perfect for a Friday or Saturday night in, whether you want an action movie where you are fully invested, like in Taken, or you simply want to laugh along at the antics of the protagonist as he works his way through henchmen, like in the Transporter series.

Check out some of these Luc Besson movies:

What did you think of Lockout?

Haha, well definitely keep you inspections in check Katie! :) We had a great time watching this movie, laughing at the plot holes, etc. There's some decent action and it moves quickly.

I def have got to see this movie. The preview to Lockout got my attention now that I've read your amazing review I'm sold, can't wait to enjoy this film. :)K

Mel Gibson returns to type in 2012's Get the Gringo, a gritty action movie wh... 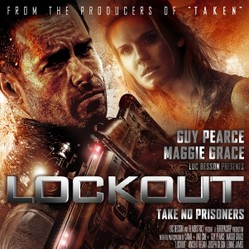 Mel Gibson returns to type in 2012's Get the Gringo, a gritty action movie where the main character shoots firsts and asks questions later. Check out the DVD and movie review.
38%  2   4 Mike_W
Entertainment & Media

The 2011 Green Hornet movie introduced a new generation to the masked super hero. The Green Hornet has been entertaining audiences for nine decades through radio, TV and comics.
32%  1   4 Mike_W
Action and Adventure Movies