The Royal Canadian Mint has undertaken minting multiple Looney Tunes coins in various sizes. These coins are almost certainly going to be popular.

Canada is helping Looney Tunes catch up with Disney. Over the years, Disney has made many silver and a few gold rounds they call coins, but finding other characters was difficult. Oh, an occasional silver round with a Looney Tunes character would appear on Ebay, but there was no real entry of Looney Tunes into coin collecting on any large scale. That is currently changing. The Royal Canadian Mint has begun minting a number of Looney Tunes coins. And, the variety being minted is great.

The Royal Canadian Mint has been selling fine silver coins at face value, with the 20 for 20 program being the most popular.  In this program a coin s bought from the mint for face value, even though the coin is intended to become a collectible coin in the future.  The 20 for 20 coins cost $20, and have a $20 denomination.

Bugs Bunny, perhaps the most popular Looney Tunes character, is the subject of one coin in this series.

The Half Ounce Fine Silver Coins

The Royal Canadian Mint has announced that an eight coin subscription is available to join the Bugs Bunny coin above.  These are all half ounce fine silver coins, and all bear the date 2015.  They include some favorite characters.  The characters are Tweety Bird, Sylvester the Cat, Marvin the Martian, Road Runner, Wile E. Coyote, Daffy Duck, Bugs Bunny (not the same image as on the coin described above), and That’s All Folks, which is a multiple character coin.  My favorites are the last three, Daffy Duck, Bugs Bunny, and the entire group together.  Individual coins can be purchased without taking the subscription.

The mintage for the half ounce coins is thirty thousand for each coin, and he finish is matte proof.

These are actual currency with a denomination of ten Canadian dollars each.  So, they are actually coins.  Most of the older Disney issues were rounds, but not technically coins, or at least were not currency.  Disney coins that are real currency in Niue are being minted now by the New Zealand Mint.

The One Ounce Silver Coin Set

There is a one ounce fine silver coin set of four Looney Tunes coins.  These are selectively colorized coins with a denomination of twenty Canadian dollars.  The coins include Tweety Bird, Sylvester the Cat, Daffy Duck, and Bugs Bunny.  In addition, a one ounce coin of multiple characters, also colorized, is available.  The additional coin is called Merrie Melodies.  These coins all have a proof finish and a mintage of twelve thousand five hundred.

The large two ounce fine silver coins are also available as a subscription in addition to individually.  These coins are colorized.

The two ounce coins have a denomination of thirty Canadian dollars, and a low mintage of five thousand pieces for each coin.

One kilogram Looney Tunes coins are available in both fine silver and fourteen karat gold.

The half ounce subscription comes with a nice case when the last one is bought.

These Looney Tunes coins would make a great gift for anyone...of any age. I recently bought a Wedding Bells ingot from The RCM as a wedding gift. Nice website too!! 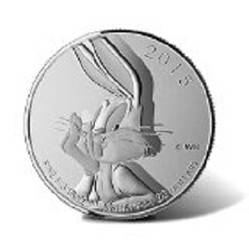