See if this MMORPG from Nexon is worth playing.

Mabinogi is an MMORPG released by the company Nexon.  This game is very different from your standard MMO.  Besides just fighting, there are other skills you can acquire in the game, such as blacksmithing, cooking, tailoring, weaving, and the most innovative, playing music.  The combat system is also different from the standard RPG.  You don't point and click on enemies and then just exchange blows until someone dies, you actually strategically use skills according to the battle, and the enemy.

As mentioned before, you have the ability to compose and play music, and depending on which instrument is equipped, comes a different sound.  The best part about this is that you can compose your own music, and then copy and paste it into the game, to play your musical creations.

The combat is very unique and brilliant.  Rarely comes an MMORPG that has a different combat system than the normal point and click.  Each skill has an active effect that you must utilize in battle to be successful.  When you get hit, your character actually gets stunned, and when you hit an enemy, they get stunned.  Therefore, after you hit an enemy and knock them back, you need to use a skill such as defense, or counterattack, to make sure you take minimal or no damage.  The combat system is definitely one of the best I've ever encountered in all my years of gaming.

The skills system is also very different from other games.  Most online games have classes, and set skills to go with those classes.  In Mabinogi, there are three races: giants, humans, and elves, but save for a few, most skills in the game are learnable by every race.  If you were an elf, you could raise melee skills, if you are a giant, you could raise magic skills, and so on.  This allowed you to choose whichever race you wanted to, and build them any way you wanted to.

The leveling system is yet again very unique.  Firstly, there is NO level cap.  My main character is currently totaling level 2000.  Yes, that is three zeros.  There is a rebirth system, which you can use freely every three real weeks, where you can take your character's current level back to 1, which makes training and leveling up a lot easier.  Basically how it works is you have two levels.  There's your current level, and then your total level.  Let's say you first start out at total level 1, and then get to level 30, then after three weeks, you rebirth to level 1 again, then get to level 10.  Your current level would be 30, but your total level would now be 40.  With each level you gain, you're rewarded with one ability point which you can then use to enhance your skills.

The game has probably the worst stability I've ever seen in a game.  There's always something wrong with the game, whether it's extreme lag, items are lost, or the server is down.  The biggest problem came not too long ago, where the majority of players were actually locked.  Yes, the majority of the player-base could not log onto their characters for a few months.  That's just...absolutely ridiculous.  The company never even explains the situation, only either giving a monotonous apology, or nothing at all.  There was this very rare robe that came out during an event, then after the event ended, the only way to get the robe was to do this extremely hard dungeon with a very low chance of it appearing.

Some skills in the game are very very hard to rank higher.  There is this skill called windmill, where to rank it from rank 2 to rank 1, the amount of times you have to use it repeatedly is literally in the thousands, so it was a great achievement to get to rank 1, or even master the skill completely.  Around a year or so ago, skill training potions were released.  These people who got rank 1 on these skills spent an enormous amount of time and effort to rank these skills up.  Now, people can have a fully trained skill in 2 seconds.

Lastly, one of the main features of Mabinogi, music composing, was basically cut off.  There was a website called Mabimml which you could go to and find composed music scores that you could then copy and paste into Mabinogi and play the song.  That website eventually got shut down, because of copyright.  They shut the website down because of songs that were basically covers of the actual song.  You only had one computerized instrument playing the songs, and they shut it down because of that.  Eventually, the music composer on the official Mabinogi website got shut down too, where people could also post their created music.  They didn't even put any effort into deleting the copyrighted songs, they just got rid of the entire composer.  Suddenly, one of the best features of the game is discarded because the creators don't want to put any effort into it.

All in all, I would NOT recommend this game.  It was in my opinion one of the best online games out there when it first came out, but now it's full of problems, and things that used to make it so right, have now changed and make it so wrong.

I hope this review was helpful for anyone thinking about playing this game. 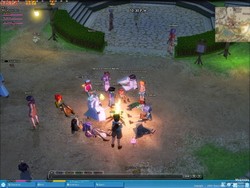 Want to inspire the whole family to help around the house? Or to establish for once and for all who actually does all the chores? A really fun PC game can help!
95%  19   8 JoHarrington
Popular PC Games