Since 1960 Mardi Gras doubloons have been part of the Mardi Gras celebration in New Orleans. These doubloons were first designed by H. Alvin Sharpe, and made their parade debt as one of the throws of the Rex parade in 1960.

What is a Mardi Gras throw? In New Orleans parades are a spectator interactive event. People on the floats toss inexpensive items to the crowd, and whoever catches an item or picks it up from the ground takes ownership of the item. Strings of beads are a frequent throw, but Mardi Gras doubloons are often added to the mix.

What are Mardi Gras doubloons? Doubloons are coin shaped items. Doubloons are special keepsakes that are thrown to the crowd. Although they started with Rex, some other parades now include doubloons as one of their throws. In fact, the idea spread within a year or two to other Mardi Gras organizations. Doubloons give the name of the krewe, which is a group parading, the theme of the parade, and the year, with some very nice images. While not every parade krewe throws doubloons, many throw several colors, and a few throw different designs. Special designs on doubloons for a grand marshal or for a king or queen is not unheard of, and these sometimes are thicker than others.

Doubloons thrown are of aluminum and may have a plain or a reeded edge. Most are a standard size, which makes storing them easier, but a few different sizes occasionally appear. Doubloons can be colorized by being anodized, or may be simple aluminum. Occasionally, a parade will use a different shaped doubloon design, but most are round.

Today, due to the rising cost of aluminum, and a period during which doubloons were ignored by many in the crowd, the plastic cup has replaced them in popularity. This is also, in part, due to the fact the plastic cup contains parade information and at the same time can be useful. In fact, if a parade throws doubloons, it may be just a few members who actually have them to throw.

This Can Be a Problem

Like coins, a doubloon should be of as high of a quality as possible.  This can be a problem.  If a fluttering doubloon is caught in the air, a rare event, then it will be in better condition than if it hits the concrete street and rolls around.  Small nicks can occur near the rim, and colorized doubloons can show places where the thin color layer is worn away.  Doubloons landing in the grass are often in decent condition if they remain clean.

Stepping on a doubloon causes damage, and some are actually rolled over by floats or other parade vehicles.

Riders on the floats either throw one or two doubloons at a time, or toss a handful all at once.  When a handful is tossed it can be difficult to grab one in the air.

Even the colorizing process is inexact.  Two doubloons of the same color from the same parade may have one pale in color and the other a much deeper color.  These are, and this is important, give away items, so great care in getting them exactly the same is sometimes relaxed in favor of cost.

Learn more from a book at Alibris.

Doubloons Not Thrown at a Parade

Some special doubloons are minted for organizations that have parades, and even for some organizations that do not have parades.  These special doubloons can be multi-colored, oxidized silver, or even fine silver.  These are bought by members of the organization, and unless you know someone in the organization, or can find some of these for sale, they might be difficult to acquire.  Unfortunately, there is no standard weight for doubloons, so the fine silver doubloons may have a variety of weights.  They appear to normally be about one ounce, but there is no guarantee.  Yet, if you are a collector, these can make your collection special.

Doubloons Have Spread Out

Other Locations Have Them

I have seen doubloons in both Mobile, Alabama, and in Biloxi, Mississippi.  They are not confined to New Orleans and its suburbs.  I have even seen some from other places, but have only seen them after being reused in a truck parade.

Commercial advertising in a parade is prohibited in New Orleans.  But, in the suburbs you might get a doubloon with an advertisement on it.  I have gotten Budweiser doubloons from the Clydesdale wagon, and other doubloons that sometimes even were coupons.  Some were for products, others were for the now defunct Breakers football team, and still others were for politicians.

Many people simply gave up collecting after Katrina.

I used to have quite a few doubloons from when I lived in the quarter. Not sure what I did with them, though. They were always such fun to catch, along with the beads, of course.

They are easy for visitors to take home. Current ear parade doubloons have little value, so they can be placed in luggage or even carried like change i a pocket. I doubt airport security would have a problem with them, and if they are taken away it is not a costly loss.

I've wondered what people do with these doubloons. Thanks. 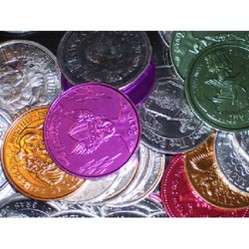