Dutch botanical illustrator Maria Moninckx (c. 1676 - February 1757) collaborated with her father, Jan Moninckx (c. 1656 - May 1714) in the creation of color illustrations for their magnum opus, the nine-volume "Moninckx Atlas". Maria contributed 101 watercolors to the Atlas while Jan produced 273 paintings. Eight volumes were published from 1686 to 1709. The ninth volume, published in 1749, over three decades after Jan's death, did not include watercolors by either Jan or Maria.

The botanical tomes were known as "Moninckx Atlas" in recognition of the contributions by the father-daughter team of illustrators.They actually were entitled "Afteekeningen van Verscheyden Vreemde Gewassen in de Medicyn-Hoff der Stadt Amsteldam" (“Portraits of Several Exotic Plants in the Physic Garden of the City of Amsterdam").

The Atlas was commissioned by Joan Huydecoper van Maarsseveen II (February 21, 1625 - December 1, 1740), mayor of Amsterdam, and Jan Commelin (April 23, 1629 - January 19, 1692), an Amsterdam alderman. Huydecoper was also an administrator with the Dutch East India Company (Vereenigde Oost-Indische Compagnie), and Commelin was a botanist and herbal pharmaceutical merchant. They were instrumental in convincing the Amsterdam City Council to establish, by a decree dated November 12, 1682, a Hortus Botanicus (Latin: hortus, "garden" + botanicus, "botanical") in the Plantage neighborhood east of Amsterdam's city center.

The new botanical garden included exotic plants that were prized for their economic, medicinal, and ornamental value. As commissarissen (commissioners), Commelin and Huydecoper oversaw the garden's multiple missions of economic and medicinal botany, botanical research, horticulture, and public amenity. A herbarium was not installed on the premises, so Commelin and Huydecoper commissioned the Moninckx to create a pictorial repository of the garden's plants.

Few details have emerged concerning the father-daughter team outside of their conscientious, colorful botanical illustrations. Government records reveal that Maria, at the age of 47, married Martinus de la Ruel (1676-1759), a commissionair ("commissioner's agent"), in Amsterdam on April 18, 1723.

Fortunately, the obscurity of the Moninckx's personal lives is balanced by the resplendent profusion of their professional lives. Moninckx Atlas has survived the centuries intact and is respected as an authoritative source for botanical information during the Dutch Golden Age in the seventeenth century.

Gasteria nigricans came to be known in Afrikaans, the Dutch-derived language of South Africa, as hottentotsrys ("hottentot's rice") in recognition of the culinary use of the plant as a cooked rice dish by the Khoi, early southwest African natives. According to the Plant List of the Royal Botanic Gardens, Kew, thirty-one synonyms --- of which five are listed as illegitimate, i.e., rejected and no longer used --- have been assigned to Gasteria nigricans. Sixteen of these synonyms, including all five rejects, place Gasteria nigricans into the Aloe genus. Fourteen synonyms are in the Gasteria genus.

Botanical descriptions often situated Gasteria nigricans in the Aloe genus because of the prominent succulence (Latin: succulentus, "having juice, sap") of its leaves. The leaves of Gasteria nigricans are puffy or swollen, not flat, because, as a succulent, it stores water in its leaves, thereby filling them out.

Nevertheless, the accepted genus is now regarded to be Gasteria. This genus was named in 1809 by French botanist Henri Auguste Duval (April 28, 1777-March 16, 1814) in recognition of the characteristic, stomach-shaped flowers of the genus. Gasteria is derived from the Greek word for "belly, stomach" (γαστήρ, gastēr).

As its stomach-shaped flowers are the defining characteristic of Gasteria nigricans, the succulent plant finds it home in the aptly named Gasteria genus.

Synonyms reflect different botanical descriptions of the same plant. In botanical nomenclature (Latin: nomen, “name” + calare, “to call”), different names for the same plant are gathered as synonyms, and the earliest or most accurate name is selected as the main scientific name, comprising the genus and species and any subspecies. Thus, Gasteria disticha var. disticha (Greek: δι, di-, "two" + στιχός, stikhos, "row, line"), referring to the plant's two-rowed leaf arrangement, and Gasteria nigricans ("blackish, becoming black"), referring to the plant's dark leaves, were found to refer to the same plant. The two rows of leaves fanning from the center of the base distinguishes this species from other relatives with leaves spiraling in rosettes from the center of the plant.

Gasteria disticha var. disticha is now regarded as the accepted name for the plant. Gasteria nigricans is considered to be a synonym.

Gasteria disticha var. disticha is native to the Northern and Western Cape Provinces in the southwestern sector of South Africa. It especially occurs in the Succulent Karoo, a desert ecoregion that stretches from western South Africa into southwestern Namibia and that is a succulent paradise, serving as habitat for one-third of the world's succulent species. Gasteria disticha var. disticha was also often collected from the Cape of Good Hope (Afrikaans: die Kaap van Goeie Hoop), the rocky headland at the southern tip of the Cape Peninsula (Afrikaans: Kaapse Skiereiland) that juts dramatically into the Atlantic Ocean.

The thick leaves of Gasteria disticha var. disticha grow in two distichous rows as basal tufts, layering upwards from the ground. Typical of Gasteria species, its leaves are described as lingulate (Latin: lingua, "tongue") because their shape is reminiscent of the rounded outline of a tongue.

Beginning in the spring, long-lasting flowers blossom in a graceful raceme (Latin: racemus, "cluster, bunch"), that is, a main shoot to which flowers are attached, each by its own pedicel (Latin: pediculus, "little foot"), or short floral stalk. Racemes, reaching about one foot (0.3 meters) in length, branch from a slender scape, that is, a flowering, generally leafless stem arising from a plant's roots, standing up about one foot (0.3 meters) from the base of the plant.

Flowers, about one inch (2.54 centimeters) in length, are colored pink to vermilion tipped with yellow green. The distinctive tubular shape that is reminiscent of a stomach, delicately bulges near the base and arches into a curve near the tip, with its six-parted opening.

Almost like prismatic floral bells, the flowers hang down as they unfurl, each suspended in pastel contrast to the dark basal leaves.

Seedpods change from green to brown at maturity.

While humus rich, sandy soils predominate in its natural South African habitats, Gasteria disticha var. disticha is adaptable to rocky environments where it emerges from fissures or in the shade of large rocks or under the shelter of larger shrubs.

The Gasteria species that were depicted in the Moninckx Atlas were all added to the Hortus Botanicus before 1700. The first live Gasterias were introduced into England in 1731, with Gasteria disticha appearing there in 1820, and secured their niche in gardens and greenhouses throughout the United Kingdom.

Gasterias are also popular in the New World, where, in California, their plentiful, sweet nectar is beloved by hummingbirds.

Nectar was sipped from Gasteria disticha var. disticha flowers by the Khoi, early southwest African natives. The Khoi also cooked the plant as a kind of rice.

According to the Plant List of the Royal Botanic Gardens, Kew, an accepted name has not yet been determined for this species. Other synonyms include:

Pelargonium lobatum is native to South Africa, primarily dwelling along the sandy coastal flats of Western Cape Province, swathing inland over 90 miles (150 kilometers) to the foothills of the Piketberg Mountains and east to the George Local Municipality at the border with Eastern Cape Province.

Pelargonium lobatum are adaptable to temperate environments. Their easy growth, prompted by heat and drought resistance, is sometimes stunted by external sensitivities, such as sudden freezes or excessive water.

The species was added to Hortus Botanicus in 1698 by commissioner Joan Huydecoper van Maarsseveen II, to whom the roots had been sent. Pelargonium lobatum was thence cultivated in England in 1710.

Pelargonium lobatum, with its dramatic coloring and foliage, is popularly planted indoors and outdoors in any temperate climate.

Successful propagation is also achieved through leaf cuttings and seeds.

One of the striking features of this species is the size of its leaves, which is recognized by its species name, lobatum (Greek: λοβός, lobos, “the lobe of the ear or of the liver, the pod of a leguminous plant"). Its leaves often have an enormous diameter of around 12 inches (30 centimeters). Soft, velvety hair densely coats the leaves, which have variously incised edges. Much lighter than the upper surface, foliage undersides sometimes pale to a light greenish white.

Flowers open with five sepals and five petals into a pleasant star shape that presents a harmonious contrast of dark purple edged with creamy yellow. Arising above the plant's leafy canopy, six to 20 flowers radiate on their pedicels (Latin: pediculus, "little foot"), or short floral stalks, out from a peduncle (Latin: pedunculus, "footstalk"), that is, a central stem, in umbel-like clusters (Latin: umbella, "sunshade," diminutive of umbra, "shade").

In breezy sunlight, the flowers dance and shine like dark-centered stars with coruscating points.

Pelargonium lobatum is found in the midst of gorgeous scenery

Maria Moninckx's illustrations of two South African plants, Gasteria nigricans (Gasteria disticha var. disticha) and Pelargonium lobatum, amaze four centuries later with their vibrant reality. These two plants were at the beginning of their world tour at the time of their portrayal. Both have maintained global popularity in private and public landscapes, and Maria's illustrations confirm their consistent attractiveness, unchanged over time.

As for Maria, she accurately captured the essence of so many plants with never a thought that admirers at a later time would wish that her father Jan and she had also made likenesses of one another.

This article is dedicated to the memory of Maria Moninckx and to her illustrious collaboration with her talented father, Jan Moninckx.

Gasteria species illustrated by Maria Moninckx were added to Hortus Botanicus collection before 1700; Amsterdam's botanical garden, founded in 1638, is one of oldest in the world.

view from Piekenierskloof Pass at Citrusdal at base of Cederberg Mountains: Damien du Toit (coda), CC BY 2.0, via Flickr @ http://www.flickr.com/photos/coda/186599971/

Hortus Botanicus, one of oldest botanical gardens in the world: A. Bakker, CC BY 3.0, via Wikimedia Commons @ https://commons.wikimedia.org/wiki/File:Amsterdam_-_Hortus_Botanicus.JPG

Wijnands, D.O. The Botany of the Commelins: A Taxonomical, Nomenclatural, and Historical Account of the Plants Depicted in the Moninckx Atlas and in the Four Books by Jan and Casper Commelin on the Plants in the Hortus Medicus Amstelodamensis, Rotterdam. Rotterdam: A.A. Balkema, 1983.

The Art of Botanical Illustration by Wilfrid Blunt and William T. Stearn

Revised and enlarged by Professor W.T. Stearn, this major work, first published in 1950, is still considered the classic book on the subject. It provides a survey of the development of botanical illustration from palaeolithic times to today.

As New World transplants, Gasteria nigricans is attractive to hummingbirds.

Bowstring hemp (Sansevieria hyacinthoides) is presented, especially in its cu... 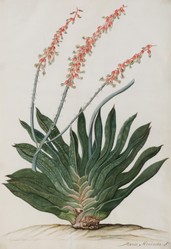 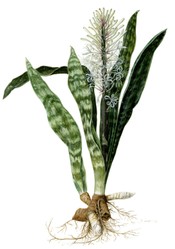 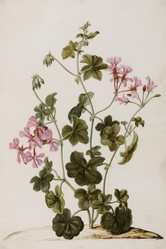