Anne Boleyn is a very important figure in history. She caught Henry VIII's attention while he was still married to Katherine of Aragon. In 1536, Anne and her brother, George, were executed for treason and incest but there was another Boleyn sibling that many people forget about; Mary Boleyn. Mary was Henry VIII's first Boleyn interest while she was a lady-in-waiting to Katherine of Aragon, before Anne came to the English court around 1526.

Historians believe that Mary was likely the eldest of the three Boleyn siblings, with George Boleyn likely the youngest. While it is difficult to confirm this, Mary married first and it was common for fathers to arrange the marriage of their eldest before any others; especially girls.

Mary was the Maid of Honor in 1513 to the Archduchess of Austria, Margaret. After her short time in Brussels, she went to France, where she served as a lady-in-waiting to Henry VIII's younger sister, Mary Tudor, who married the King of France. After the death of the elderly King, Mary remained in France to serve the wife of the new King, Francis II, and also became his mistress. From there, she gained the nickname, The English Mare.

However, Thomas Boleyn, Mary and Anne's father, used this to his advantage. He was a power-hungry man, along with his brother-in-law, Thomas Howard. They wanted to become the most influential at court and the best way they believed to do that was through Henry VIII taking Mary as his mistress. Mary moved back to England but before she became Henry VIII's mistress, she became a lady-in-waiting to Catherine of Aragon. She also married a gentleman of the Privy Chamber, William Carey. This was an invaluable connection for the Boleyn faction as Carey was close to the King of England on a daily basis.

Mary caught the eye of Henry VIII around 1524. While Henry had many mistresses - and many are not named - historians believe Mary was one because of Henry's need to seek a papal dispensation to marry Anne Boleyn just a few years later.

There is much speculation around Mary's subsequent pregnancies. Around 1524, she gave birth to her daughter, Catherine, and then on March 4, 1526, to her son, Henry. The affair with Henry VIII ended during the middle of 1525, which would lead to a chance that the infant was Henry VIII's illegitimate son. Mary naming her son after the King of England could also be speculation that she believed the child was not her husband's.

However, this is not something that can be proven. Henry VIII never confirmed that Mary's too children. This was during a time when Katherine could no longer have children due to "women's problems" and Henry VIII was desperately seeking an heir to the throne. Something that supports Carey was the father is that Henry VIII acknowledged his previous illegitimate child, Henry FitzRoy.

It could be that the three people involved were unsure. There was a strong possibility for both men to be the father. Without DNA testing, which was not found until centuries later, there would have been too much doubt. The Court and the English people would have been unsure about the parentage of the infant Henry and there would have always been the question of his legitimacy to the throne.

Henry VIII did support Mary and the children so he may have believed that, at least, Henry was his. However, at the same time, Anne Boleyn had returned to England and caught the attention of the King. By 1526, the King wanted a way out of his marriage to Catherine of Aragon and to marry Anne; she did not want to become his mistress. It would have been embarrassing for Henry that his nephew by marriage would also be his son.

Another strong factor to support the infant's parentage was how Anne had been granted the wardship of the boy after the death of Carey in 1528. Henry feared that Mary's behavior would degenerate after the death of her husband. This was not the case for Catherine Carey, suggesting that Henry knew who was her father.

Something that was a blessing and a curse was how Mary Boleyn found herself an outcast from the family. During Anne's reign, in 1534, Mary re-married. Opting for love instead of power, she married a young solider, William Stafford. By 1535, the rest of the Boleyn family had received titles and grants due to Henry VIII's love for Anne. Stafford was a commoner and not seen suitable for the sister of the Queen of England. Out of embarrassment, she was banished from court.

She was left struggling for money and had to write to Thomas Cromwell to help her. While, at the time, this would have been difficult, it was a blessing. Just two years later, the Boleyn faction fell. Anne and George were executed and Thomas Boleyn was no longer seen at court and died a lonely man with just his wife, Elizabeth, for company.

Mary was smart enough to stay away from her family while they were being persecuted for crimes that, arguably, they did not commit. She stayed away while the King of England turned his attention to a third wife, Jane Seymour. There is no evidence that she even tried to contact them. Henry VIII seemed to have rewarded her for her smart move by awarding her children royal favor.

In 1540, when Henry VIII was marrying his fourth wife, Anne of Cleves, Catherine Carey was Maid of Honor and later married a member of the King's household, Sir Francis Knollys. She was also close to her cousin, Elizabeth I. Henry Carey was never offered such titles during Henry VIII's reign - maybe Henry did not want to start any rumors - but he was given the title Lord Hunsdon during the reign of his cousin.

A Quiet Life for Mary Boleyn

Mary seems to fall out of the history books after being Henry VIII's mistress. She is the least talked about when it comes to the Boleyn family but one of the most prominent at the same time. She inherited all of the Boleyn land and grants after the death of her parents and enjoyed her life with her husband who she loved dearly. While she had little money, it is clear that she was happy until her death in 1543.

An interesting turn of events sees the Boleyn line gaining the throne again. The current Duchess of Cornwall, Catherine Middleton, is a descendent of Catherine Carey. She is also a descendent of the Stuart line, along with Prince William through his mother's side.

Thanks, cmoneyspinner. I can't really judge Henry or any of the people from Tudor England because I'd be judging them with society's view today. It was so different then and Henry was under so much pressure to provide a male heir for the throne. But you're right, Mary probably doesn't care how history records her reputation. She made some very smart decisions by marrying for love and getting banned from court. At least she kept her head!

Given what happened to her sister Anne, somehow I think Mary could care less how history records her reputation. She managed to keep her head and didn't get done in by that womanizing maniac! You can probably tell that I don't have a very high regard for Henry! But I must say every time someone writes an article about the monarch or the "extensions", it's always interesting. :)

Thanks for commenting, georgettejohn. Really glad you enjoyed it.

I'm glad you enjoyed it, Jo. Thanks for commenting.

A fascinating account of Mary Boleyn's life. Thank you for sharing it! 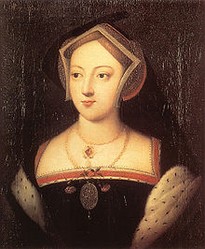