The lighthouses in Maryland can be found on or near the shores of the Chesapeake Bay and also on the Potomac River.

During our trip to southern Maryland we stop at several unique lighthouses.  Piney Point lighthouse is one of my favorites.  It was built by John  Donahoe in 1836 and is a 35 foot brick tower.  This lighthouse is called the "Lighthouse of Presidents" because it was used as a presidential summer retreat in the 19th century.  Both the lighthouse and the keepers house have been restored and are now open to the public.  This lighthouse sits on the southern shores of the Potomac river.

lighthouse on the Potomac

View of Piney Point from the Dock

These photos were taken during a trip we took to see the lighthouse in June of 2011.  I first took photos of the outside of the lighthouse and then I was able to climb up into the lighthouse.  On the first two floors were the living quarters for the lighthouse keepers.  Here they lived and worked in a small but efficent area.

Sandy Point lighthouse was first established in 1858 and it's present building was built in 1883.  It is an octagonal brick dwelling on a caisson foundation that sits out in the middle of the bay.  It was built with a decorative brick, but salt spray soon deteriorated the brick and starting in 1890 it was coated with paint.

Today this lighthouse can be seen from the Chesapeake Bay bridge.   I photographed the lighthouse from the beach at Sandy Point state park.

There are three different types of lighthouses built along the shores of the Chesapeake Bay and the Potomac river.  They are the screw-pile type like the ones at Hooper Strait and Drum Point, the typical conical light that those in Piney Point and Cove Point and the Cupola style house such as the one at Point Lookout.  The cupola style is a cupola that sits atop a square type house.

The lighthouse at Point Lookout first operated in 1830, and for 136 years thereafter it helped to keep ships safe along the portion of Chesapeake Bay that it protected.

Do you prefer the screw-pile, cupola or traditional conical style lighthouse?

These are cool pictures! I love them!

I'm not sure which is my favorite type, but I do enjoy looking at lighthouses. They always seem so inspirational to me. : )

Thank you for the interesting overview of Maryland lighthouses. I will be spending a lttile time this summer on the Eastern Shore of the Cheseapeake Bay area. It will be fun to have the time to see some of these beautiful structures that played such an important role in our maritime history.

Maryland has several different types of lighthouses. In the Chesapeake Bay a... 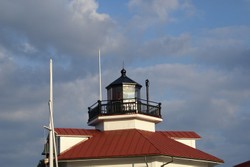 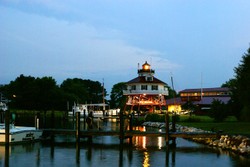