Masala Chai is an Indian black tea made with spices, milk and sugar.

Masala Chai is an Indian spiced tea. It consists of black tea, spices, sweetener and milk, brewed together and strained. The tea is usually Assam, a strong tea that is not easily overpowered by the spices and sweeteners. Traditional whole spices are used, the "warm" spices - one or more of cardamom, cinnamon, ginger, star anise, peppercorn, and cloves.

Although it's not really a British "cup of tea" it's actually rather delicious!

Masala Chai developed in India in the days of the British East India Company. At that time the British were trying to promote Indian tea, as a way to break the Chinese monopoly. The British encouraged factories and other working places to have "tea breaks" for their workers, just like at home in Britain! They also supported independent tea sellers on the growing railroad system.

This British promotion of tea encouraged drinking tea with milk and sugar, unlike the traditional Asian style. In order to save money, and make the rather expensive tea last longer, the vendors began adding additional spices, resulting in spiced tea, or Masala Chai.

Masala chai is also very popular in the home, with each household having their own recipe and method of preparation. Different spices and proportions are used, producing a wonderful diversity in this drink. There are also variations in method of preparation - whether the tea is added first, or the spices, or whether everything is just boiled up together.

One thing that is constant though is that Masala chai has four ingredients - black tea (usually Assam), spices, milk, and sweetener. The spices are traditionally whole spices, strained off along with the tea leaves before serving. The dominant spice is usually cardamon, and ginger (especially fresh ginger) and cloves are commonly used to impart a spicy flavor.

My Indian friend served us Masala chai after dinner recently. She didn't tell us exactly what it was going to be, just offered "tea." She started boiling some stuff in a pot so we wondered a bit. Then she served the drink with floating green leaves in it!

Although I could have done without those leaves (not quite sure what they were even now) the Masala chai was really delicious. I had to ask for seconds!

Anyway, although the authentic Masala chai, different in every home I'm sure, is wonderful, there are plenty of "Westernized" varieties available that taste really good. Some of them use vanilla or chocolate, which make the whole drink taste much less like a spiced drink and more like a flavored hot chocolate. Just remember they are often already sweetened so hold off on the sugar till you taste them! And, yes, unless it says decaffeinated on the container, Masala chai is made from black tea so it has caffeine.

Masala chai is traditionally a mixture of loose leaf tea and spices, brewed together with sweetener and milk and then strained before serving. So, for the most authentic version, buy loose Masala chai!

Well, just as with other teas, tea bags make life simpler! So, for those who don't want to deal with the hassle of loose tea and spices, go with Masala Chai in tea bags.

Yes, for the truly lazy, there's even instant Masala Chai mix! I bought some for my brother-in-law for a gift last year and they were pretty good. Those spices were really nice!

If you enjoy writing, why not join our writing community!

What do you think of Masala Chai?

Here's your chance to write about your experience with Masala Chai

As a serious tea drinker, this sounds interesting to me.

Ah, the British influence can surprise you!

I didn't realize that the British had so much influence in the creation of this tea!!

I drank it with vanilla (I think), as well as other spices, in an Indian restaurant, and it was really good. I really like masala chai. It's my favorite way to drink black tea.

Yes, the cardamom does make it delicious!

I love masala chai, cardamom is my favourite spice when it comes to milk tea! 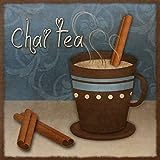 What are White Teas? How are they related to black (and green) teas. Are they good for your health?
100%  7   7 jptanabe
Kinds of Tea

Not really a true tea, Yerba Mate is an infusion made from the yerba mate plant.
Loading ...
Error!