A look at some of the weird, wacky and fun medieval costumes out there, including advice on how you can make your own as well (for the more creative amongst you!)

Come on in you Medieval costume fans- this here page is dedicated to the wonderful world of Medieval fashion, costumes, and possibly accessories too. History was boring at school....snore...... BUT it doesnt have to be that way... hey, Blackadder was funny right?????

Why am I so obsessed with dressing up in Medieval clothes?

Maybe it's my love of Blackadder?

My friends mock me, that's a fact. You see in so many different ways I'm a regular guy. I'm 37 years old and drive a very practical 7 year old Toyota Yaris (it's cheap to insure!), and live in a suburb of London. But I just love medieval costumes! It would be strange enough if I limited this hobby to just dressing up for my pals' parties, but I also enjoy sourcing, buying and collecting these costumes as well.

There are plenty of medieval costumes that you can buy from your local store or from an online store come to that. But my favourite kind of costumes are without a doubt those that are hand made. If you look hard enough you can find specialist costumiers that make medieval fancy dress costumes for the theatre and also for the BBC for their period dramas. One such company is Angel's Fancy Dress, a costumiers that has been around for over 50 years and have a really amazing range of custom made outfits. I don't doubt that you would have seen some of these outfits on such period dramas as Pride and Prejudice and Downtown Abbey.

At the present time I have over 16 medieval themed outfits with a few of those being of the custom made varieties. These are the ones that I really treasure and I fully intend to hold onto them and pass them down to my children as family heirlooms! Who knows, they may be worth something in fifty years time!?

I think the reasons I love these costumes so much are three-fold in nature. Firstly, I love the theatre and elegance of them. Secondly I find myself drawn to the middle ages themselves, mainly because it was a much simpler and in may ways more innocent time. But finally I can trace my obsession back to watching Blackadder 1 and 2 as a child. If you haven't seen this BBC comedy series you really should. The first series is set during the Medieval era whilst series 2 (which is actually much better) is set during Elizabethan times. They feature an all star cast with Rowan Atkinson taking the lead role as Edmund Blackadder. I've embedded a clip from series 2 to give you a little taster, but if you're a fan of classic British comedy you really should give it a go!

After watching these series you may find a strange phenomenon taking place... You will find yourself looking up grand medieval style costumes on websites, and find an urge to buy the aforementioned costume.... Just don't blame me if you develop the same addiction. In this here ye olde medieval blogge I want to share with you some of my fave medieval costumes and also pass on a few tips on how to make your own (if you are the creative sort!) I'd love to hear from you, and if you feel so inclined I'd love to see some pics of your very own medieval fashions!  I bid you adieu!

Without a doubt my fave Medieval costume is the 'Knight in Shining Armour'. I just love it. Ok, its not very comfortable to wear but that's not the point. Wearing this little bad boy you really feel like a righteous dude going into battle, and the comments you get from your pals are amazing... well worth the discomfort of all the mock armour! :)

The only problem I had was actually learning how to drink my beer with the helmet on..... A long straw is very much recommended for this purpose... otherwise a brilliant costume!

How to Make Your Own Medieval Monk Costume 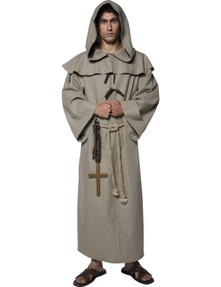 'Make my own costume?!' I hear you gasp! Well yes, it's not as difficult as you may think. In fact, if you really don't know how to stitch and make clothes you can actually make a Medieval Monk costume with very little skill indeed! The first step is to find yourself a large-ish piece of dark or light brown coloured fabric (ideally cotton, but it doesn't have to be). This will form the monk's main robe. With a felt tipped or permanent marker pen draw a circle in the centre of the garment which is big enough to accomodate your head. Then take a sturdy pair of scissors and cut the head hole out of the fabric. Voila, you have your robe. All you then need to do is find a short length or thin rope and tie this around your waist, and you have yourself an authentic looking belt.

You may think that this will look a little 'rustic' and even amateurish, but believe me this will actually add to the rough and ready look that you are after! Of course if you feel to lazy too do this (shame on you!) then you can of course buy Medieval Monk costumes online. Actually they tend to be quite cheap!

If you really want to add to the look then I'd recommend you but a monk wig. These tend to be a 'mop' style hairdo with a bald patch at the top. Ok, not the best look if you're looking to 'wow' the ladies, but at least you will look holy!

A Little Clip of Black Adder

Not strictly Medieval but close.... and very funny!

What is Your Favourite Season of Blackadder?

The traditions and evolution of Halloween costumes can be traced to the pagan...

Archaeologists have uncovered the site and remnants of the long-lost chapel ... 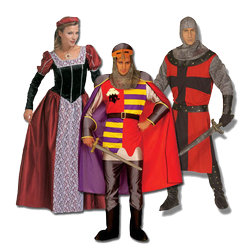 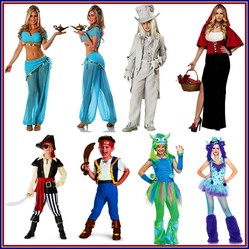 The traditions and evolution of Halloween costumes can be traced to the pagan beliefs. The druids dressed up to perform religious rituals during the Hallow’s eve.
31%  8   1 frankbeswick
Post Medieval 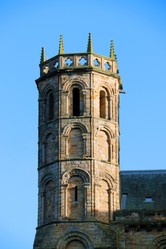 Archaeologists have uncovered the site and remnants of the long-lost chapel of the Prince-bishops of Durham.
100%  43   18 frankbeswick
Other History