For over half a century the delights of German Saxony were largely hidden from the Western world as it was part of the Eastern Bloc. Reunification and restoration has changed that

A walk on the basalt-cobbled streets of Gorlirtz and Bautzen takes you on an architectural journey that is surprising when one considers what these towns have endured. Buildings from the Gothic, Renaissance, Baroque, Art Nouveau and Bauhaus eras are a feature of the two towns and attract architects from all over the world to marvel at their existence. 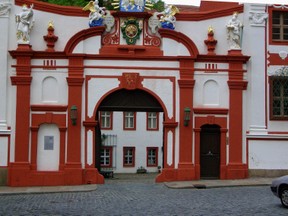 For over half a century the delights of German Saxony remained largely hidden from the Western world, due to its geographical position in the former East Germany but with the reunification of the country and the restoration of her most beautiful cities, this area of south east Germany is once more attracting visitors.

In Saxony, culture goes hand-in-hand with nature, and one of the many pleasures awaiting the visitor is driving or cycling on roads with little traffic.   We drove from Leipzig through Dresden and on towards the medieval towns of Görlitz and Bautzen on roads bordered by massive tracts of yellow rape (the size of the fields a relic of communist collectivisation), the wind turbines on the horizon like giants with flailing arms striding across the hills.

The over 900-year old town of Gőrlitz shares a border with Poland and Czechoslovakia (Prague in a mere 160 Kl. away), its glorious architecture virtually untouched despite the wars that raged across the land.  Standing on the German side of the Peace Bridge and gazing at the blue, yellow and pink facades of the houses across the river on the Polish side, is to feel the full weight of recent history.

Prior to World War II, Gőrlitz straddled both banks of the River Neisse but when the Allies redrew the boundaries after the war and divided Germany between the western powers and the Soviet Union, it lost its eastern suburbs.  Fortunately for posterity, lack of money prevented the Soviets from knocking down and rebuilding the heart of the town in utilitarian style as they did in Dresden and Leipzig.

A Walk Through Gorlitz 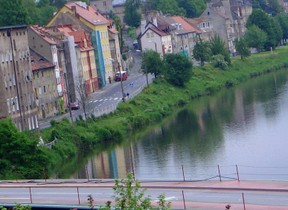 A walk through the crooked, narrow streets on the 15th century basalt cobblestones, forged from the mountain just outside the town, takes you on a fascinating journey through the past. Throughout its dynamic history, this former textile trading town has exercised special political importance, initially by its position and importance as a medieval trading post and then by its transformation into a residence for the bourgeoisie in the 19th and 20th centuries.

Due to its position on the trade route to important places like Frankfurt, Leipzig, and Krakow, and to a special privilege granted to the town, all merchants passing through were obliged to offer their wares in Gőrlitz, giving rise to houses with impressive inner yards where the textiles could be displayed.  Enormous squares, the sides lined by the houses of the rich merchants who dealt in wool and furs in the days when Gőrlitz dominated the trade, richly decorated house fronts, fortifications and fortified towers, sacred buildings from the Gothic, Renaissance, Baroque, Art Nouveau and Bauhaus eras have had the effect of turning the town into a 3-dimensional reference book of the history of architecture. 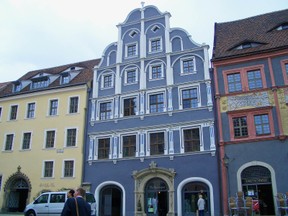 In the part arcaded Untermarkt (Lower Market Place) is grouped one of the finest collection of Renaissance and Baroque town houses to be seen in Europe, a place of pilgrimage for architects the world over.  Indeed, 4,000 of Gőrlitz’s late Gothic, Renaissance, Baroque, Gründerzeit (German Industrial Revolution) and Art Nouveau buildings, are protected as National Monuments. 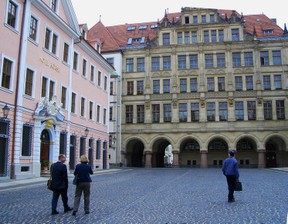 Blending harmoniously with the older buildings are the Gründerzeit and Art Nouveau quarters.  The Strassbourg Arcade Department Store with its stunningly beautiful chandeliers and magnificent staircase and the Art Noveau Karstadt Department Store date from the period of urban expansion which started in the 19th century when immigrants from Silesia flocked to the town.

What to Do and See in Gorlitz

This is a good place to enjoy shopping and to watch craftsmen carrying on the traditional trades of  jewellry making, porcelain painting and toy-making.  It is also an ideal place to sample the local specialities – Landskron beer and a fruit schnapps called Görlitzer Geister.

And after you’ve visited the museums, the churches, and the Town Hall, and heard the famous Sun Organ played in the beautifully restored church of St. Peter, a romantic tour of the old town with the Night Watchman will add another, different, dimension to your understanding of Gőrlitz.   After listening to his grisly stories and sagas you will appreciate the visit to one of the town’s old hostelries for a welcome drink! 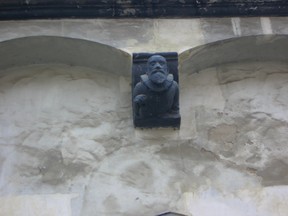 After you have admired the centuries of architecture in Görlitz, you may want to check out the historic narrow-gauge track in the Zittau mountains 40 Kl. away, or journey to the Czech Republic and spend a day in Prague. 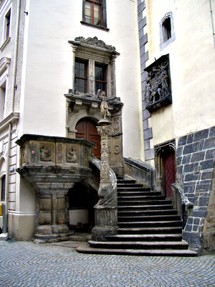 There are many kilometres of cycle and hiking tracks along the Oder-Neisse to explore and guided tours by bicycle through the cultural regions of Upper Lusatia, Lower Silesia and Bohemia can be arranged by many of the travel agencies.

Centre of Sorbian Culture and Seat of the Nation 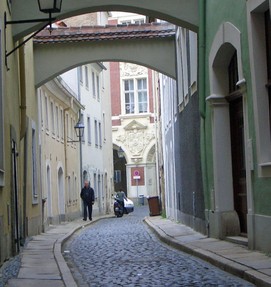 There’s also Bautzen, the town famous for the fact that all political prisoners were sent here at one time, and which celebrated its 1000-year-old existence in 2002. Although heavily damaged during World War II the town has been restored to something of its former glory.

It is a mere 40 kl. from Görlitz but a world apart by virtue of the fact that it is the centre of  Sorbian culture and the seat of the Sorbian nation, founded by Moravians and Bohemians who had separated from the Catholic Church long before Luther made his break from Rome. 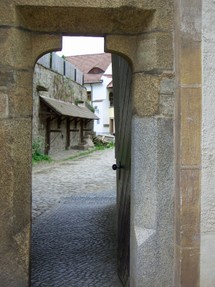 The Sorb culture was supressed by the Nazis during World War II but this was a factor which helped them re-establish it under the new regime in 1945.  As the communists had to prove they were better rulers than the Nazis, they made special efforts to re-instate the traditions and language of this Slavic minority, and today, the Sorbians publish their own newspapers, perform in and support Germany’s only bi-lingual folk-theatre, educate their children in Sorbian traditions, speak their own language, and have been effective in ensuring that road signs and official notices in the area are in both German and Sorbian.  The cultural museum in Ortenburg Castle tells the story of this Slavic people whose language closely resembles that of Czechoslovakia. 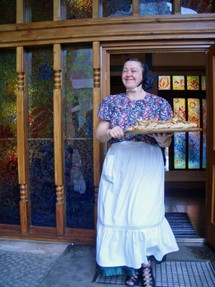 Bautzen is unique in other ways too, being positioned on a granite plateau above the Spree river and from the Friedensbrücke Bridge there is an awe-inspiring panorama of the 23 medieval towers that dominate what remains of the town wall.  In the town centre stands, or leans, another tower, the 1000 year old Reichen Tower which is 1.44 metres off the perpendicular.  Visitors should climb to the top for a view of the town centre, rebuilt in Baroque style after the 30-years war in the 17th century.

And after all that sightseeing, a visit to the famous Wjelbik restaurant with its splendid stained-glass windows for a typical Sorb meal is called for.  The staff wear the 102 year old traditional Sorb costumes and they take great delight in explaining every dish to you, from the dumplings in horseradish sauce to  the home-made cinnamon ice-cream.

Bautzen and Görlitz once formed part of a six-city alliance which wielded power over the whole of Upper Lusatia.  That power has waned, but composers, castles, architecture and arts are once more energising the life of this beautiful province and their power to charm the visitor is once again their greatest attraction.

I like the quality of light in your photos. Reminds me of my own days visiting Germany, when it wasn't sunny but not raining either. Cloudy but very pleasant.

I only wish my photos were better. I dropped my camera while I was there and although it continued to take pictures, it affected the balance somewhat and they all came out as though I was leaning at 180 degrees when I took them. This necessitated a great deal of cropping which lost me quite a bit of the original image.

Sorbian culture is intriguing and such a surprise to find it still thriving. I think we learned a little about it at school (long, long time ago) but I was delighted to find this enclave of a different culture on this trip - something I hadn't realized was there.

You made me want to visit these two places. The architecture in Görlitz does, indeed, look impressive. And Bautzen with its Sorben culture is intriguing. First time I hear about the Sorbs!

You have such a gift for bringing places alive. Like many people, I have read about the major cities of Germany but I know so little with respect to its countryside and architecture and civic live. This is a tantalising glimpse into somewhere that I instantly want to visit. 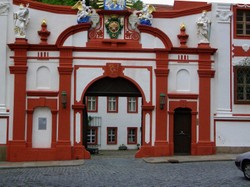 No matter if you travel to Germany for fun or for work, knowing when the different public German Bank Holidays are will help you to avoid closed shops and find out about some ...
43%  5   4 mivvy
Germany