The famous old city of Munich is a great place to visit, for its old buildings and museums, but also for its beer. The capital of Bavaria is home to the annual Oktoberfest beer festival and a range of bars, pubs and beer halls. Here, Steve Rogerson presents a selection of some of the better ones to start the exploration process.

The capital of Bavaria is the home of Germany’s famous Oktoberfest annual beer festival, but beer lovers can find enjoyment in Munich at any time of the year in this old city’s bars and beer halls. Many also serve traditional Bavarian food, which usually means lots of meat, so tuck in and down a few glasses of the country’s finest beers in some of the venues listed below.

The Camra German beer guide describes this as "probably the most famous pub in the world". It is certainly big, and by that I mean enormous. The Hofbrau Original comes in giant one litre glasses but is nothing special. Musicians play Bavarian songs and are open to the odd happy – or hoppy – birthday tune. There is also a souvenir shop. This is worth visiting just to say you have been there, but have one and move on to one of Munich’s better bars.

Ayingers am Platzl, Am Platzl

Seasonal beers include the Winterbock at 8%, a very dark beer with a smooth bitter taste; even the burnt flavour is smooth. There's a malty aftertaste. The Ayinger Naturally Stout Cellar Beer at 4.9% is not a stout but a very pale beer, unfiltered hence its slight haziness. The distinct bitterness is reminiscent of a Czech pilsner. Among the other seven beers available is Ayinger's Original Dark Wheat Beer at 5.1%, a cloudy light-brown beer, sweet, refreshing and very nice.

Tal is the main drag from Marienplatz to Isartor and this is close to the former. The bar goes back further than it looks from the outside and has a range of seating from stools at the bar to wooden chairs and tables. The brewery itself is in Tegernsee, about 50 to 60km from Munich on the banks of a gorgeous lake. Beers available include the Hell, Spezial, Hopfweisser and, recommended, the Dunkel Export, a 5% abv dark beer with a refreshingly light taste and a hint of chocolate.

Directly opposite the Tegernseer is the main Munich outlet for the Schneider Weisse brewery. This is a large restaurant style beer hall. No seats at the bar, but there are bar stools round taller tables opposite the bar, with the rest of the hall filled with standard tables and chairs. A wide range of traditional Bavarian food is available and an impressive beer menu with about nine beers from the brewery as well as bottles from other breweries. The brewery beers range from the non-alcoholic up to the bottled-only 12% abv Aventinus Eisbock, thick and dark, and full of flavour. The ordinary Aventinus is a more handleable 8.2% tasty, dark cloudy beer with a smoked flavour.

Completing the Tal trilogy is Paulaner’s central Munich home. On the same side as Tegernseer, this beer and food hall has the usual Paulaner range plus a couple of extras from Hacker-Pschorr and Fürstenberg. This is another pub that goes back further than it looks.

This more recent welcome addition to the Munich bar scene is focused on craft beer. Though an official outlet of the Bavarian Camba brewery, its range goes well beyond that with up to 30 rotating beers on draught and a catalogue of bottled beers.

On the corner of Rosenheimer Straße and Orleansstraße, close to Ostbahnof station, the bar is functional and unpretentious. Wooden stools line the wooden bar, and high tables make up the rest of the seating. It can get busy, making the service sometimes slower than ideal, but a minor gripe for such an excellent bar. For those feeling peckish, there is a small food menu – the Chili con Bier is recommended.

This is the Augustiner brewery tap, attached as it is to the brewery. The main room is a smaller beer hall, and less touristy than some of the city centre Augustiner outlets as it is the other side of central station. There are, however, side rooms, available to hire for private parties. Traditional Bavarian food is on offer. One of the standard beers is the Augustiner Edelstoff Hell, a light coloured 5.6% pilsner style beer, slightly sweet with a hint of metallic aftertaste, probably caused by it being served too cold. The Augustiner Hell vom Fass is a very pale beer with a light taste, slightly bitter. The Dunkel has a lot of body and is on the strong side. The Augustiner Ruß'n is a white beer with spices, and is mixed with lemonade. This is light and cloudy, very sweet with a hint of ginger.

Next to the Max-Weber-Platz tube station, this used to be one of the good brewpubs in Munich but is now part of Lowenbräu and no longer brews its own beer. The cellar bar, which housed the brewery, is now closed apart from for private parties and the ground floor restaurant is now a bar and restaurant. There are wooden stools at the bar, so it still has a bar atmosphere. As well as Lowenbräu, it also serves Becks and Franziskaner beers. A barman told me in October 2016 that they were hopeful of reopening the brewery at some point.

For such a large city as Munich, any short guide can only give a small sample of the bars that grace the streets and alleyways. That said, the ones here are a good starting point for those on a short visit. The three pubs on Tal, right in the centre of town, could form a nice little pub crawl, and for those who like the modern craft beers then the Tap House must be visited. Apart from that, enjoy exploring some of this Bavarian city’s other outlets.

In particular, the chocolate hints in the Dunkel Export at Tegernseer Tal Bräuhas, the cloudy smokiness of the Aventinus at Weisses Bräuhaus and the ginger hints in the Augustiner Ruß'n at Augustiner Bräustuben appeal to me.

Your introduction identifies traditional Bavarian fare as being heavy on meat dishes. What is the predominant type, and how is it typically served (baked, fried, grilled, roasted, smoked)?

You also mention Ayingers am Platzl as having traditional Bavarian fare to sample. What would be kinds, prices and quantities of that fare as bar and finger food?

Germany is famous for beer and sausages, but in Nuremberg the sausages and be... 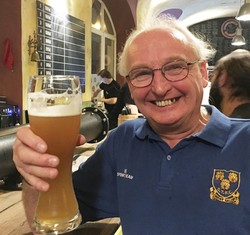 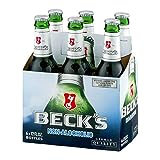 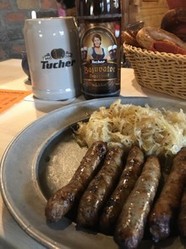 Germany is famous for beer and sausages, but in Nuremberg the sausages and beer are both very local
37%  1   5 SteveRogerson
Belgium

A look at some of the best bars and taverns in the centre of Brussels
Loading ...
Error!