There are nine short stories in the June 2021 (Issue 30) issue of KZine, a science-fiction, fantasy, crime and horror magazine for the Kindle. Dark or funny, or both, seems to be a theme running through this month’s magazine, starting with a twist on the traditional virgin sacrifice to a dragon, and ending with a delightful hole-in-the-wall to a new world fantasy. A strong start and end to a very good collection; I even liked the poem. Oddly, given I am mostly a science fiction, fantasy and horror fan, my favourite fell into none of those categories but was a crime story, Robb White’s coming-of-age tale of a young lad being initiated into the harsh world of organised street crime.

“The Last Girl” by Elizabeth Guilt

Emma Riley’s name was picked out; it was her turn to be sacrificed to the dragon. However, as with these things, the sacrifice had to be a virgin so Emma took the obvious way out with a local boy she quite fancied. The villagers, and her father, were not happy. But why did it have to be a virgin? Emma decided to find out and discovered everything was not as it seemed. One girl’s fight to change the world, well told with a good punch.

Charles Holland is running a nice scheme exchanging common Earth sweets for jaw-dropping alien technology. That is until his trade catches the attention of government agents. An engaging story that sadly seems to fizzle out a bit at the end, but an enjoyable read nonetheless.

“On Thin Ice” by Joachim Heijndermans

Sharon was once very nasty, until she met Carol, but Carol was gone now and Larry was about to find out how nasty she was. A tale of revenge that is mostly back story as Sharon explains to Larry why she is doing what she is doing. A pity I couldn’t hear the music as the story unfolded; maybe one day that will happen – KZine with a soundtrack. A cold story about a cold woman on a cold day.

“How Inevitably You Will Be Mine” by Alexandra Grunberg

Louise is haunted by an incident from her past, an incident that makes her scared of the sea, that gives her nightmares, an incident she recalls as she travels on the ferry with her mother to visit her grandparents. A candid look into the head of a troubled teenager.

“Dreaming of Shadows and Sunflowers” by Brooke Tiedt

“My Dearest Friend” by Sara Athouguia

Ellie was bullied. “Smelly Ellie,” they called her. But she had a friend, she’d told the class about her, and three of the bullies were determined to meet her, even if it meant going into the old haunted house. You get the gist. This short story is amusing in a beautifully dark way.

“Boosting for the Devil” by Robb White

Stealing cars in a small town taught the 15-year-old his trade, but now he had to move up a league in Miami. After rescuing a guy being attacked, he gets an in into a car-stealing ring and is doing well, at first. Menace hangs over the whole well-written story, as the reader hangs on every word.

“The Truth is Out There” by Keith Marsland

This is a poem; I don’t do poems. But it is short, so let’s have a go. OK, it is funny and not at all deep, and quite topical.

“Gentrification and the Dream House” by Brian M Milton

Ah, what a lovely little fantasy to finish the magazine. Isla doesn’t believe Rupali’s story of a different world through a door in her dream house, but she goes along anyway and finds not the cheerful market that Rupali remembers but one that is run down and struggling, a bit like the real market behind the house in the real world. Could their fortunes be linked?

SteveRogerson, Thank you for the persuasive magazine-cover picture, practical information and product line.
Two other stories that intrigue me are the gentrification dream and the memory bank. That's quite a thought-provoking question about whether one would prefer to lose forever memories other than those deemed memorable keepers.

Steve Rogerson reviews the twenty-ninth issue of the Kindle science-fiction, ... 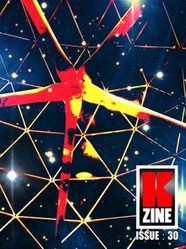 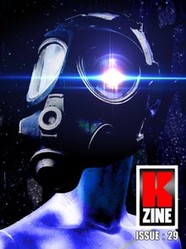