Steve Rogerson reviews Todd Sullivan’s The Gray Man of Smoke and Shadows, the second in his series of vampire novellas set in South Korea

A rogue vampire is determined to take revenge on an abusive uncle but there are forces out to stop her in this mixture of fantasy, magic and horror set in South Korea. And a little girl is in mortal danger. This is The Gray Man of Smoke and Shadows, a novella by Todd Sullivan. Reviewed by Steve Rogerson.

This novella is the second book in Todd Sullivan’s South Korean vampire series following Butchers, in which we learned about the Gwanlyo, a vampire organisation that controls their own kind, especially their interactions with humans. In that first book we met Hyeri, a rogue vampire who takes pleasure in torturing and killing humans.

The second book starts with the Gwanlyo hiring Min Jae, an assassin, to put an end to Hyeri.

Hyeri though is on a mission to kill her paedophile uncle, the gray man in the book’s title, who had abused her as a little girl. The man is continuing his predatory ways and has his eyes on a new girl, nine-year-old Ye Bin, who Sa-hak is enticing to his studios. Can Hyeri get to him first or will the Gwanlyo stop her in their determination not to draw human attention to vampire kind? And what is Seok-Jo, the girl’s father, willing to sacrifice to save her?

Is The Gray Man of Smoke and Shadows any good?

This thankfully lacks the impatience of the first book. Todd Sullivan has slowed down a bit, taking his time to set the scenes and build the anticipation. That said, it is still a fast moving, action-packed read.

I liked the blurring between good and evil. Take Hyeri. On the one hand, most readers will be behind her quest to avenge the abuse suffered at the hands of her uncle. But this is clouded by an extremely dark side where she takes human lives with no guilt.

It still suffered from the same problem as Butchers in that everything was revealed as it happened, in a linear fashion, putting no trust in the readers to work some things out themselves. But overall a big improvement on book one.

Todd Sullivan teaches English as a second language, and English literature and writing in Asia. He has had numerous short stories, novelettes and novellas published across several countries, including Thailand, the UK, Australia, the USA and Canada. He is a practitioner of the sword-fighting martial arts, kumdo/kendo, and has trained in fencing (foil), Muay Thai, Capoeira, Wing Chun and JKD. He graduated from Queens College with a master of fine arts in creative writing, and received a bachelor of arts in English from Georgia State University. He attended the Bread Loaf Writers’ Conference and the National Book Foundation Summer Writing Camps.

SteveRogerson, Thank you for practical information, pretty pictures and product lines.
As with Butchers, is it not possible that the style of the writing reflects the subject matter? Sullivan moves through a bureaucracy, albeit one of vampires ;-D.

It quite intrigues me to read about bureaucracy, be it Ismail Kadare's The File on H or James C. Scott's Seeing Like a State or Yevgeny Zamyatin's We.

Steve Rogerson reviews the twenty-seventh issue of the Kindle science-fiction... 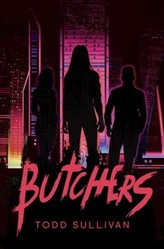