There are six short stories in the September 2020 (Issue 28) issue of KZine, a science-fiction, fantasy, crime and horror magazine for the Kindle. This month has produced a very inventive set of stories with all of them above average, starting with Edward Ahen’s gripping tale that keeps you guessing. I particularly liked Danielle Jorgenson-Murray’s humorous werewolf story and Maureen Bowden’s auction gone wrong. But the best by far came from Don Norum with Jacob’s scary house guest.

“The Belief Ritual” by Edward Ahen

Malame, who relates this tale, is the assistant to a sorcerer. When his master is approached to endow godlike powers on a nearby ruler, it is Malame who is sent to accomplish the task. With lots of mistrust, betrayals and sex, Malane completes his mission, well at least a mission. This is a good mix of intrigue and humour, seasoned with a dash of necromancy.

Jack has a habit of entertaining those who will listen with stories about his exploits with the supernatural. Actually, at times it seems his exploits were more with alcohol, adding some appropriate humour as he investigated the mysterious death of a baby and the apparent haunting of a little girl. Well told and quite gripping, it has, of course, more than one twist at the end.

Explorer Joanna Featherstone is back in London and visiting the Great Exhibition at Crystal Palace, but there seems to be more than just a casual interest in one of the inventions on show, an invention that has the potential to make a lot of money or, well, destroy the world. This is a rough and tumble tale with a touch of Indiana Jones. Action packed, so you can’t help but read it quickly.

Oh, wow, this is good. Someone knocks on Jacob’s door, a woman, needing help. He invites her in, running worst-case scenarios through his head as they talk. Is she mad? Possessed? A dark and scary tale.

“The Muse Loves a Tryer” by Maureen Bowden

Nice to have something light after the previous dark tale. Siblings George and Tess think their luck is in when a man arrives at their auction house with an old manuscript, a collection of poems from a really bad poet. But its history makes it sought after, and thus all is going well when the bidding starts. Then a surprise guest arrives. Fantasy and time travel form a comic mix. Bring on the sniggers.

A support network for werewolves? Werewolf bloggers? A WhatsApp group? Yes, this jolly piece is not your typical werewolf story. For a start, Alysha hasn’t actually turned yet, but she has the Werewolf Starter Pack, and she’s blogged about it, badly according to other werewolves. Her new actual pack don’t know she’s the blogger, well not yet; the internet can be anonymous, hence the title. Lots of comic angst, some banter and the sort of feelings everyone gets before they try something new. Funny.

SteveRogerson, Thank you for the practical information and the product line.
Surprise guests and werewolf support groups are appealing for October's last day even though Don Norum sounds topmost with what happens when one solitary person opens the door to another. It will be interesting to read since your write-up in a way makes me think of The ghost rider by Ismail Kadare.

Steve Rogerson reviews the twenty-seventh issue of the Kindle science-fiction... 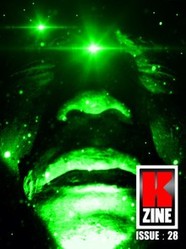