Michigan has more lighthouses than any other state in the US. They dot the shores of the Great Lakes.

lighthouses in the fall 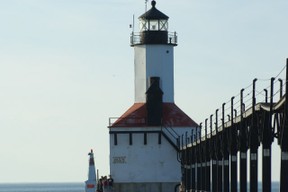 After a brief stop to see the lighthouse we were on our way up the coast of Michigan.  The first lighthouse in Michigan that we stopped at was in St. Joseph, Michigan.  Here we found a set of Inner and Outer Pier lighthouses which function in together as range lights.  They are made to be seen one above the other and as with other range lights, when the sailors saw them aligned perpendicularly they knew they were in safe waters. 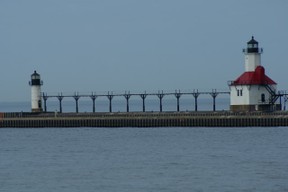 Zazzle products from my Photos

One of my favorite Michigan lighthouses was the lighthouse in Holland, Michigan.  This lighthouse has a distinct architecture that originated in Holland.  The bright red building (nicknamed Big Red) was covered with steel to protect it from the harsh winters and then painted bright red.  We stopped at a park just across the harbor from the lighthouse and I was able to photograph it framed in the fall leaves and the sand dunes.

Muskegon is located on the eastern shore of Lake Michigan.  On these shores you will find many pier lighthouses that are at the end of long concrete piers.  This helps them to jut out well into the lake and guide ships that are coming in and out of the harbors along lake Michigan's east coast.  Most of them were build in the early 1900's.  When we stopped in Muskegon we drove to Pere Marquette Park and from there I was able to walk along the shore and photograph the lights from several different vantage points.

The lights at Grand Haven make a wonderful sight as you are walking down the hill from the town.  There are two lights several hundred feet apart on a very long stone pier.  The taller light is fifty-one feet and stand closest to shore.  The out light at the end of the pier is a short tower on top of a building that originally was the fo-signal building.  These lights have been in their present location since the pier was extended in 1905.

used to research for this page

South Haven was the last on our brief lighthouse tour in Michigan.  It is a beautiful red cast-iron tower that is at the end of a long pier.  It is still an active light today, aiding in getting ships safely into the harbor.  I was fortunate to be able to photograph it on a day when the seas were a bit rough and I could capture the waves hitting against the pier.

The few lighthouses I photographed in Michigan was barely a start on the more than 115 lights the dot the shores of the state.  I really enjoyed our time in Michigan and we hope to return and photograph more of these historic lights.

I was never really over impressed with the idea of lighthouses. I am not a native Michigander and It was no big deal in Missouri or Colorado where I lived. And then I came to Michigan in 1986 and got to meet one in person, :), Wow what a difference in attitude.

I would have never picked Michigan for having the most lighthouses. Your pictures are beautiful as always.

Really beautiful photos. I love lighthouses! I've never made it to Michigan to see any of these. 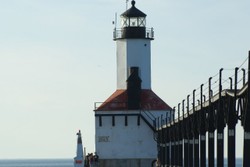