The Morgan horse descends from one foundation sire named Justin Morgan. But you may not know that Canadian Horses helped build this handsome, versatile American breed.

The origins of Figure, for that was his real name, are shrouded in mystery. What is certain is that a Vermont singing master named Justin Morgan acquired the young bay colt in the 1790s. Figure’s ancestry was never recorded. Decades after his death, he was described as a son of a Thoroughbred named True Briton. Others believed he was descended from Dutch horses or Arabians. However, Figure did not look like any of these breeds, although Mr. Morgan always called him a Dutch horse. The bay colt with thick mane and tail stood 14 hands and had fairly heavy bone, immense strength and good speed at the trot and gallop.

In fact, there are many questions surrounding the acquisition of Figure. One account says that Morgan himself had owned Figure's dam (who was supposedly part Thoroughbred) and leased the Thoroughbred stallion that sired Figure, then sold all his horses, including the pregnant mare. He reportedly repossessed Figure (by then either two or three years old) and his dam when the mare was not paid for.

The story sounds a little odd, since it mean would mean that Morgan waited at least three years to take back his horses for the unpaid debt. Even the date is in question, with some accounts saying he got Figure as early as 1792 and others say it was 1795. The fact that Morgan said his colt was of Dutch breeding contradicts all the tales of Thoroughbreds and Arabians.

Some people believe Figure was a Canadian Horse or descended from that breed. Certainly Figure looked and performed like a “petit cheval Canadien”. His owner lived in Vermont, just across the border from Quebec, and would have known about the little French Canadian Horse because of the constant trade in horses and goods between Quebec and Nova Scotia and New England.

Canadians evolved from top quality Barbs, Turks, Dutch (Friesian), Spanish and Arab horses sent to Quebec from the Royal stables of King Louis IV of France in the 1600s. Some of these breeds were used to create the Thoroughbred in England several decades later. But in Quebec, the Canadian turned out quite different from the lanky Thoroughbred: dark, short and rugged, with incredible endurance and strength. These horses also were fast pacers and trotters and were in demand in eastern Canada and New England, in part because they were well adapted for the extreme weather conditions of that area.

Did Justin Morgan Have Hybrid Vigor?

Author Robert West Howard stated in his book, The Horse in America, “The consistent compactness of the Morgan breed, plus the black legs, mane and tail points, the valiance and the adaptability to stagecoach, wagon, sulky or saddle all suggest the heritage of Figure as a chance hybridization of Canadian horses and Narragansett Pacers with, perhaps, some Chickasaw and British cavalry horse infusion.”

However, Figure’s incredible prepotence as a sire suggests he was unlikely to have been a recent mix of so many different breeds. Narragansett Pacers were usually sorrel and invariably described as thin-legged and homely. They did not trot and seldom galloped, preferring to amble or pace. The handsome, fast-running Figure with the good trot was nothing like them, and his dark colour, beautiful head and stocky, thick build were as different as could be from that breed.

By the time Figure was born, the French-Canadian Horse (as it was then called) already was a well recognized breed. If Figure descended from a line of Canadian Horses that looked just like him, that would explain Figure’s remarkable ability to replicate himself. Hybrid vigour had nothing to do with his quality.

Whatever his ancestry, Figure soon became famous in New England for his speed, strength, stamina and good temperament, and was in demand as a sire. But it was not until after his death that it became apparent that he had consistently passed on his looks and abilities to his sons and grandsons. Only then did Figure became known as Justin Morgan after his owner.

Since Canadian Horses and the original Justin Morgan were virtually identical in every way, breeding Figure and his sons to Canadian mares was a logical way to further strengthen the already dominant characteristics of Justin Morgan the horse. The pure Narragansett was extinct by 1800, but mares with Naragansett blood also were bred to Figure and his sons to intensify the pacing ability inherited from the Canadians. Canadians of this time also may have had a dose of Narragansett added for the same reason. Incidentally, one Justin Morgan son, The Hawkins Horse (foaled ca. 1806). was sent to Quebec, and was bred to local Canadian mares before being taken to northern Canada and disappearing from the record.

The pedigrees of mares were not usually recorded in those early days. Word of mouth was often the only information provided about a mare’s background, and as a result there are different versions of any one horse's pedigree. The following is based on a variety of sources.

Black Hawk, also by Sherman, was out of a black mare born in Nova Scotia. She was said to be of English or Thoroughbred blood, but her black colour (rare in Thoroughbreds, but common in Canadians), endurance, trotting ability and her place of birth suggest she was much more likely to have been a Canadian. Both Billy Root and Black Hawk are found in modern Morgan, Standardbred and Saddlebred pedigrees.

Clearly, Canada’s Little Iron Horse played a key role in helping the remarkable Justin Morgan found a dynasty that continues to this day.

Comparing the Traditional "Lippitt" Morgan to the Canadian Horse

Both breeds share many characteristics. Most have little in the way of white markings. Lippitts are 13 to 15 hands while Canadians are 14 to 16 hands (most are 14.2 to 15). Both are hardy, have great endurance, can do well on scanty rations and are very strong for their size.

The description of the Lippitt from the Lippitt Morgan Breeders Association includes these words: "Beauty, brains, good bone and feet, all wrapped up in three basic colors: chestnut, bay or black.....blocky, strong, short back, laid back shoulder, crested, upright neck, small ears and bright eyes." That equally describes a Canadian Horse.

Modern show Morgans have been selected for different characteristics than the original Morgan was, and consequently there is now a difference in type between the show Morgan and the traditional Morgan of Lippitt type. But the old-style Morgans still look very much as they did 200 years ago and, like their Canadian relatives, they can do almost any kind of work and do it well.

There is another similarity. As with the Canadian, there are some individuals that still pace.

Author Jeanne Mellin has written several books about Morgans, many of which are out of print. Some can still be purchased on the secondary market, including The Morgan Horse and The Complete Morgan Horse.

Other books include The Men Behind the Morgan Horse by Marilyn C. Childs (1979), Morgan Horses by Robert L. Gordon (1976) and The Morgan Horse in Pictures by Margaret Cabell Self (1967, reprinted in paperback in 1973).

Genetics, do not lie, like it, or not. Even the phenotype of both the Morgan, and Canadian horse, are almost identical after almost 200 years, even with the admixture of Saddlebred, to the Morgan, by the "Show Horse People". The Quarter Horse People, have the same dilemma as their "Story" about the origin of the so-called Quarter Horse, is contrary to their true origin as a by-product of the Remount Program, and the breeders who were involved in it. The Morgan Horse, was the original foundation blood of the Remount Program. That is a cold hard verifiable fact. Stories, for whatever reason, are what they are, true, or not.

As a keeper/steward to six Morgan mares I find this article fascinating and informative, especially the followup comment by the OP regarding the article in the Oxford Journals. There is much confusion and mystery surrounding the the Morgan Horses' foundation sire Figure it's further shameful that back in the days mares were considered diminutive to the stallions as they contribute perhaps more genetically to a foal than the stallion does. I feel there's absolutely no shame but more likely honor that my beloved Morgan companions share a genetic link to the Canadian.

Genetic analysis has proven the connection that early Morgan breeders in the 1800s tried so hard to ignore. "The Morgan Horse showed similarity with the Canadian based upon pair-wise Fst (Table 2) and STRUCTURE analysis (Supplementary Figure 6 online) where they were the more closely related to the Canadian than any other sport and riding horse breeds." Published October 2014 in the Oxford Journal of Heredity, Vol. 106, Issue I, and available on-line at http://jhered.oxfordjournals.org/cont...

This idea is obviously going to persist despite evidence to the contrary. The Morgan family and horsemen familiar with Figure debunked the Canadien connection in the 1800's. Reference Lindsey's book for the most in-depth and complete description of Figure's probable heritage.

Sometimes more than one person comes up with a great idea, and only one succeeds. That was the case with Canada's Kanata Pony, a children's riding pony with Appaloosa spots.
50%  4   5 TerryMcNamee
Horse Breeds 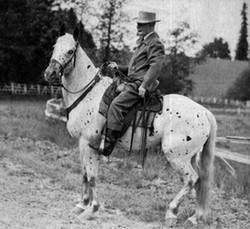